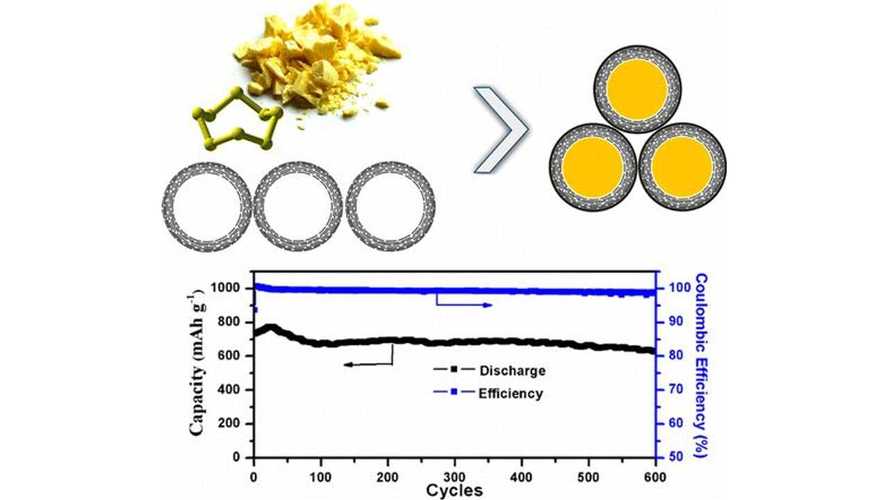 This result translates to 30 kW of available continuous power in a car with 50 kWh battery pack (without any higher pulse discharge currents for acceleration, which would need some kind of buffer in the form of ultracapacitors).

The good thing is that the double-layered core–shell structure of polymer-coated carbon–sulfur offers near 100% Culombic efficiency and capacity is not fading rapidly, so maybe even 1,000 cycles would be possible to 70-80% of nominal value.

We look forward to more improvements and hope that someday we see Li-S batteries in production EVs.

"To better confine the sulfur/polysulfides in the electrode of lithium–sulfur (Li/S) batteries and improve the cycling stability, we developed a double-layered core–shell structure of polymer-coated carbon–sulfur. Carbon–sulfur was first prepared through the impregnation of sulfur into hollow carbon spheres under heat treatment, followed by a coating polymerization to give a double-layered core–shell structure. From the study of scanning transmission electron microscopy (STEM) images, we demonstrated that the sulfur not only successfully penetrated through the porous carbon shell but also aggregated along the inner wall of the carbon shell, which, for the first time, provided visible and convincing evidence that sulfur preferred diffusing into the hollow carbon rather than aggregating in/on the porous wall of the carbon. Taking advantage of this structure, a stable capacity of 900 mA h g–1 at 0.2 C after 150 cycles and 630 mA h g–1 at 0.6 C after 600 cycles could be obtained in Li/S batteries. We also demonstrated the feasibility of full cells using the sulfur electrodes to couple with the silicon film electrodes, which exhibited significantly improved cycling stability and efficiency. The remarkable electrochemical performance could be attributed to the desirable confinement of sulfur through the unique double-layered core–shell architectures."