Toyota: "No One Is Coming To Our Door Asking Us To Build A New Electric Car" 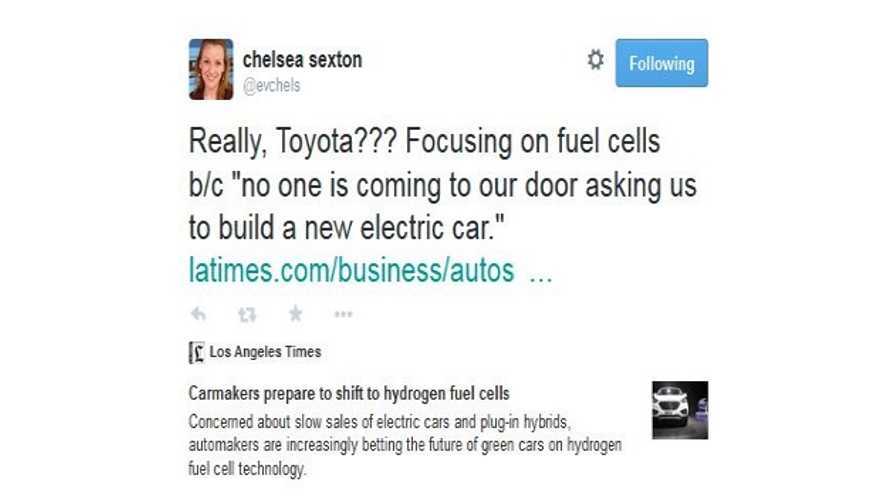 In a recent article in the LA Times, Craig Scott, Toyota's national manager of advanced technologies, is quoted as stated:

"Today, Toyota actually favors fuel cells over other zero-emission vehicles, like pure battery electric vehicles.  We would like to be still selling cars when there's no more gas."

Toyota favoring fuel cells over pure battery electric is is probably the wrong choice, but that's the choice Toyota has made.

However, it was this statement by Scott that has us scratching our heads:

"And no one is coming to our door asking us to build a new electric car."

Larsen isn't the only one who's asked Toyota to build an electric car.  In fact, at least one dealership in Southern California is practically begging Toyota to continue to build BEVs.

Those are but two examples from hundreds we can easily find by scouring the Internet.  The statements all have in common the following: Toyota has been contacted/urged/pushed to build more BEVs, but the automaker maintains that nobody wants EVs and therefore it'll build fuel cell cars.  What we wonder is who is coming to Toyota's door asking for a FCEV?  We can't find one person demanding this type of vehicle from Toyota.

The real reason Toyota is giving up on EVs?  It's simple.  For Toyota, EVs are a money loser.  FCEVs will not be profitable either, but at least Toyota will get more CARB ZEV credits per sale, compared to BEVs, so maybe it's worth it for Toyota then?