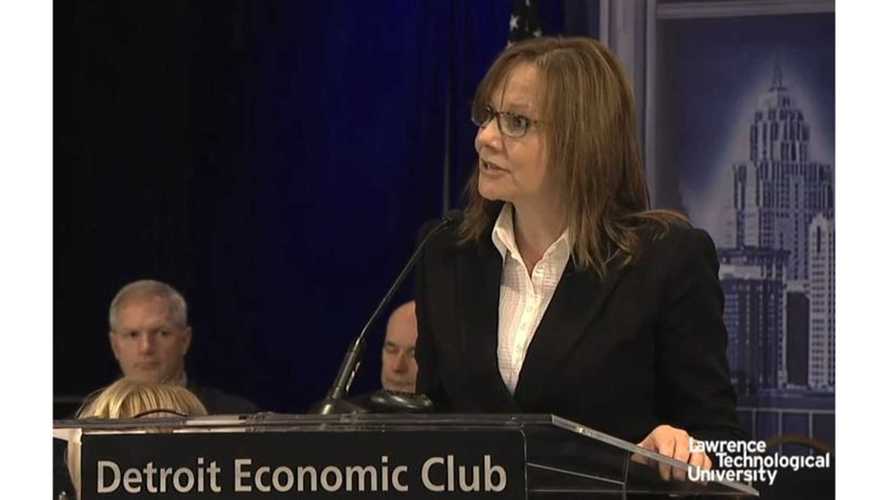 Video of the address is found above, while Barra's prepared transcript is posted in its entirety below:

DETROIT – General Motors CEO Mary Barra addressed the Detroit Economic Club on Tuesday. Her prepared remarks are below. As always, the speaker’s words are definitive.

Thank you, Sandy, for that kind introduction, and thanks also to Beth and the Detroit Economic Club for having me here today. This is the perfect setting to talk about a number of dramatic and unprecedented changes taking place in the auto industry, and what this means for GM, the City of Detroit and the State of Michigan.

In the 100 years-plus since the auto industry sprang up in our community, there have been many transitional periods. I believe we are in one of those periods again.

In fact, I believe this industry will experience more dramatic change in the next decade than it has in the past 50 years. Given what we have all witnessed in just the last few years, this is a bold prediction, I know. But it can be unbelievably exciting as well.

At GM, we are energized by this prospect. I tell my team that our generation of leaders has the opportunity and the great challenge of reimagining the company and the industry. The potential benefits for all of us who call Detroit home are enormous. This includes our business partners – dealers, suppliers and unions, including UAW Vice President Cindy Estrada, who is here today and who played such a key role in our success.

Look at the forces of change sweeping through the automotive sector...

Rapidly growing markets in Asia are causing every company to rethink its business plans.

New competitors are emerging, including some in Silicon Valley.

Underlying each of these areas of change is the evolving nature of consumer expectations. What consumers want and expect from cars and trucks and crossovers is undergoing a revolution.

Consumers expect their vehicles to be safer, more reliable and more fuel efficient.

They are concerned about congestion and climate change.

They want better communication, navigation and entertainment capabilities in their vehicles.

They want to personalize their vehicles to fit their lifestyle. And they want ultra-convenient service.

I could go on. The point is, our customers are speaking forcefully and thoughtfully about what they want us to address. By listening carefully to their hopes, concerns and expectations... and applying our talent and resources... we can develop solutions that demonstrate the customer is truly at the center of everything we do.

If we do this, we will earn customers for life. This is how we intend to compete and win. By getting closer to the customer than any other auto manufacturer.

As I stand here today, GM is a company with many strengths. But I also know we must improve significantly and rapidly. These are the facts. Complacency and over confidence have no place in the global automotive industry… and no place at our company.

It is in this context that I want to talk with you today about the future of GM and the implications for our region.

Since 2009, GM has announced more than $11 billion in investments in the U.S. Almost half of that investment has been committed to Michigan. And I’m pleased to announce today that GM will make an additional investment of nearly $300 million in this region before the end of the year.

These investments lead to quality jobs. In fact, we have worked with our UAW partners to develop initiatives that will lead to more than 22,600 jobs in the United States. Hiring has begun for many of the positions and will continue over the next few years, and many of these jobs will be based right here in Michigan.

In case you think I'm just here to be a cheerleader for a Michigan, think again. We don't invest in this region or create jobs here out of nostalgia or misplaced sentimentality. What matters in this industry is excellence, value and world-class skills. We don't invest here because we want to be popular. We invest here because we believe the talent and ingenuity of this region are key components in our plan to win globally. That's the only standard that matters.

So let’s review three areas where we know we can excel locally.

Many of you already know that OnStar is delivering the world’s largest automotive deployment of high-speed, 4G LTE mobile broadband. But that’s just the beginning.

In the next two years, we are going to start connecting cars to each other, and the world around them, using a wireless technology called V2X.

V2X encompasses both vehicle-to-vehicle and vehicle-to-infrastructure technology. It’s a game-changer for safety, because when enough cars share information about such factors as speed, direction and braking, we’ll be able to reduce crashes dramatically.

Cadillac will take the lead for our company. The 2017-model year CTS, to be built in Lansing, will be the first GM vehicle to carry V2X technology. And we believe it will also be the first for the U.S. industry.

GM is also joining forces with the Michigan Department of Transportation, the University of Michigan and other automakers to create V2X-enabled corridors on 120 miles of metro Detroit roadways.

This will provide connected cars almost instantaneous information about traffic conditions, road and lane closures and more. The first “connected corridor” will be the stretch of I-96/I-696 from US-23 in Brighton east to I-94 in St. Clair Shores, which has some of the heaviest traffic volumes in the state.

Again, the reason it will happen in Southeastern Michigan is because we have the scientists and engineers and expertise to lead the world in this critical area.

Another area where GM has placed a significant bet is in the electrification of the automobile. We introduced the Chevy Volt in late 2010 and in the intervening four years we have learned a lot about both the challenges and the promises of designing, engineering, manufacturing and selling an electric vehicle.

The scorecard on the first generation Volt is good, but not everything we wanted. We sold fewer than we expected. But, again, we have learned so much, including that breakthrough technology doesn’t always advance in a straight line.

Being first movers in this segment, we now understand the customer and value equation much better, and we are determined to make even more significant technology improvements in the electric vehicle space.

Our nearly 70,000 Chevy Volt customers absolutely love their vehicles, which have collectively traveled over half a billion all-electric miles. And in surveys done by outside parties, the Volt consistently ranks among the highest in customer satisfaction scores.

Customers love the Volt because it does exactly what it was intended to do: provide a no-gasoline option for drivers who use their vehicles less than 40 miles per trip, with a range-extending gasoline motor. Our data shows that Volt owners who regularly charge their vehicle typically drive more than 970 miles between fill-ups.

That’s like driving from Detroit to the Florida state line without ever stopping at a gas station! And, depending on their personal driving habits, Volt owners routinely report getting the equivalent of 100-200 miles per gallon.

Those are impressive numbers, and one of the many reasons why we believe electric vehicles will play an important role in the future of GM.

So at the Detroit Auto Show in January, we will introduce our next generation Volt. When it launches in the second half of 2015, it will represent a significant leap forward in technology, design and overall refinement. It will store more energy in its battery pack with fewer cells, yet go further on a charge. It will accelerate faster. And the car's gas generator will come from an all-new GM engine family and use even less fuel.

The Volt is a leap forward in automotive technology, and it has already had a profound impact on this region. Of the more than $5 billion GM has invested in Michigan since 2009, over $1.8 billion of that amount was dedicated to make our state GM's global center of excellence for vehicle electrification.

It helped fund new body shop tooling, equipment, and additional upgrades at our Detroit-Hamtramck assembly plant, which builds the Volt.

And it will also allow us to build the next-gen Volt's gas engine in Flint.

Now we are prepared to go the next step. Along with the investment news I mentioned earlier, the second announcement I am pleased to share today is that we will build the new Volt's electric drive system in Warren.

This means that all of the Volt's major components - the battery cells, the battery pack, the electric drive unit, and the gas motor - will be made in Michigan.

For GM, this electrification technology is an important element of our global business plan. And we are determined that this region will be the recognized global leader of electric vehicle development.

As I close in on completing my first year as CEO, I am frequently asked what I've learned and how I've changed. I won't burden you with a full review today, but let me tell you one thing I appreciate more and one way I’ve changed.

First, as many of you know, I got my MBA at Stanford. I know Silicon Valley and I respect the entrepreneurial spirit that region represents. But I also know that Silicon Valley doesn’t have a corner on the market for innovation, creativity and drive. These qualities exist here – in this region – as well. It’s the responsibility and opportunity for all of us in this room today to do a better job of tapping into this enormous potential.

Second, I have become impatient. I want to win. Not get by. Not hold on. Not be competitive. But win.

I want GM to excel. To build relationships with customers for life. To be the most valued automotive company in the world. Some will say these ambitions are too bold… too aggressive. I don't think so at all.

If we aren't here to win, to lead, to excel, why are we here?

Johan De Nysschen, our new President of Cadillac commented recently in Automotive News that our competitors are "...absolutely 100 percent immersed in annihilating the opposition."

He's right. This is reality. And we must be equally determined to prevail.

I want it understood that the day of GM being a polite competitor is over. We will be professional. We will be ethical, of course. But we will be tough, unrelenting competitors. And everyone who cares about the success of the company and this region should expect nothing less of us.

Today, I tell you I believe in GM more than ever. I also believe in the City of Detroit and the State of Michigan. Our fates have been linked for more than 100 years. Going forward, we are going to make a lot more great history together.

Thank you for having me here today.