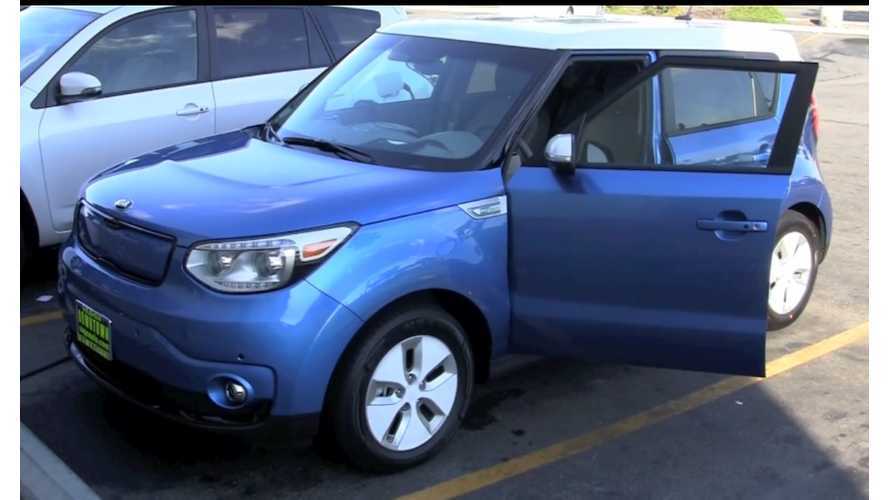 By: Tony Williams
Today, we tested a new Kia Soul EV for range autonomy. I met the car’s owner, Andrew, at a Walgreens drug store in Gardena, California at the appointed time of 9am. It was an absolutely beautiful Saturday morning as I drove my 2014 RAV4 EV up from San Diego, about 115 miles (184km), to meet Andrew and his fully charged and ready-to-go car. It was interesting to learn that Andrew had started his professional career as an 18 year old employee of General Motors working on the EV-1 project. He had lots of interesting stories about that program!

In addition, he had owned not one, but two previous Chevrolet Volts, both of which were returned (voluntarily) to the auto manufacturer due to service issues. It was with some trepidation and resolve that he stepped back into the electric vehicle arena to buy a brand new model from a manufacturer who had not previously offered an electric car for public consumption.

The Range Autonomy Demonstration is a standardized test that we perform on electric vehicles, with a purpose to more accurately compare the actual range between different models of electric cars in a very common scenario; the operator needs to know how far the vehicle will really go when stretching range in a steady speed highway situation compared to other cars. The parameters are always the same: two occupants for the test, in this case, both the owner Andrew and myself. The combined total crew weight is always close to 450 pounds (205 kg), plus or minus about 10%. There is no baggage allowed. We always use the manufacturer’s recommended tire pressure, which in this case is 33 psi (2.275 bar).

The ambient air temperature is always near 70F (20C), plus or minus a handful of degrees, and the wind is always light. We drive in a loop specifically to mitigate the effect of any wind that may exist. Here in sunny southern California, the wind is predominantly out of the west. We drive to maintain 62mph (100kmh) ground speed as measured by GPS. The windows are either all the way up, or one may be slightly open for ventilation. If the vehicle is equipped with cruise control, we use it. In the case of the Kia, the actual ground speed matched the indicated speed of 62mph perfectly and the car has an excellent cruise control, which we used.

The cars are always unmodified in as close to “as-new” condition as is possible, and the test is always done with the climate control off. This last issue seems the most confusing to some EV drivers. Any climate control must consume energy to heat of cool the cabin (or battery), therefore no improvements or changes to the method of providing that heating or cooling will improve ultimate range. Those heating and cooling methods will merely change the amount of range that is lost, compared to an electric vehicle with the climate control off.

If you wanted to drive the maximum range of any electric vehicle where electricity is used to heat or cool, you would turn cabin climate control off to get the maximum range. Period. Plus, for testing, there are far too many variables that affect the energy used to heat or cool a cabin. How many people are in the cabin, solar radiant heating, temperature maintained, any cabin vents that may be opened or closed, cabin preheating or cooling that was performed, etc. For all those reasons, and to provide the most accurate comparisons between the vehicles tested, we never use climate control.

Just Heading Out On The Test

Another issue that is frequently discussed in relation to range is “regen”. That is the ability of the motor on the car to become a generator and put energy back into the battery, typically during slowing, stopping, or going down a hill. Of course, our test specifically eliminates regen because we drive at a constant speed on level ground. Like climate control, there are far too many variables with regen to make a simple test viable. All electric vehicles will limit the amount of regen based on battery capacity, battery temperature, or other programmed or user selectable variables. Cars that have user selectable regen profiles include the Tesla Model S, Volkswagen e-Golf and Mercedes Benz B-Class ED.  Other cars have non-adjustable, yet strong regen profiles, like the BMW i3. Finally, some cars have a “B” or “E” mode included with the gear selector that arbitrarily increases regen by some preset amount when selected. That feature is in cars like the Nissan LEAF and Toyota RAV4 EV.

Regen is never 100% efficient. It’s not even close to 100%. If you consume the energy, you can NEVER put it back in the battery as efficiently as not consuming the power in the first place. For around the town type driving, with lots of stops and starts, it will ALWAYS be more efficient to anticipate the stops and slow-downs so that you need neither brakes nor regen. Obviously, this isn’t practical in modern cities with impatient drivers around you, so we need a way to capture that energy that would otherwise be lost to braking; regen does that.

The singular instance where regen is viable from a purely efficiency standpoint is going down a hill with either a stop at the bottom (where you could not stop without braking) or when the vehicle is going down a hill too fast and either braking is required to limit speed, or the velocity has reached a point where it is better to use regen instead of “wasting” the energy on increased aerodynamic drag at the higher speed.

The Kia Soul EV’s closest competition is the Nissan LEAF, now with over 150,000 sold worldwide, so it’s easy to make comparisons between the two. At the 100kmh ground speed we would be driving, and since both cars are nearly the same weight, I expected that the Soul EV would be very close to the historical consumption rate of the LEAF in this test, which consistently has been 4 miles per kWh (250 watts per mile) or 6.437 km per kWh (155 watts per km) without climate control.

Of course, the Nissan LEAF has a significantly smaller 24kWh battery than the Soul EV, and of that 24kWh, only about 21.3kWh is usable to propel the car. The Kia Soul EV properly advertises the size of the battery that the consumer cares about; the useable stored autonomous energy. We found that to be almost exactly 27kWh useable, which means that the actual Kia Soul EV battery size is about 30.5kWh total.

Since the Kia Soul EV battery is fully 25% larger than the LEAF, we expected a range quite close to 25% farther than the 84 - 88 miles that a LEAF can perform (when in new condition) under these parameters. That would put the Soul EV at an estimated range of 105 – 110 miles. But, there’s a problem. We know that the Kia doesn’t slip through the air quite as smoothly as the LEAF, therefore the boxy looking car’s consumption rate would be expected to be slightly below the LEAF’s 4 miles per kWh. How much below 4, we would find out.

Range autonomy in any thing that moves over land, through the sea, or in the air is always a product of autonomous stored energy (gasoline, diesel, jet fuel, nuclear “stuff”, rocket fuel, or electricity) multiplied by the consumption rate (economy) of that stored energy (miles per gallon, km per liter, tons per hour, or miles / km per kWh consumed).

So, the range in a test like ours is always:

The weather was absolutely perfect for the event with close to 70F (21C) degree weather, clear blue skies and light breezes. In short, another perfect day in southern California.

The course selected was a 90 mile (144 km) loop that ended at the intersection of the 105 freeway eastbound and the 110 freeway southbound, just east of Hawthorne airport (home of the Tesla Design Studio and Space X), the point that I expected to be the earliest that the car may run out of power. We would then turn south on the 110 freeway, where we would drive by the starting point (where my car was waiting for me) for the shortest towing distance if the vehicle physically stopped.

All distances below per Google Maps linked above.

Trip odometer “A” was used to record miles driven. The odometer is currently reading 1.5% low compared to Google maps. As the tires get worn and ever so slightly reduced in their diameter, this will get more accurate. The speedometer was perfect compared to the two GPS’s that were used for the test, and as the tires wear, it will read slightly faster than the car is really going.

The headlights were turned off, climate control off (except fan) and tires set to 33 pounds per square inch (2.275 bars) pressure, which is the auto manufacturers recommendations. It’s likely that one or more percentage points of range could be gained by inflating the tires to the maximum recommended pressure, in exchange for a slightly less comfortable ride and possibly irregular wear on the tires.

The elevation profile of the route is nearly flat (virtually no hills of any kind), and very close to sea level. The dash display showed “98% battery” after driving 1.7 miles, however the percent was not observed at the start. Presumably, it read 100%. Finally, the “Distance to Empty” (DTE) meter, which I generally refer to as the “Guess-Oh-Meter” (GOM), was observed displaying 112 miles after having driven 1.7 miles.

We got underway at about 9:34am and finished about two hours later.

Amazingly, The Range Journey Ends With More Than 100 Miles In The Books For The Soul EV...And At A Functioning Blink Charger (we'll let you decide which of those two things were amazing)

With an ending economy / consumption rate of 3.9 miles per kWh (256.4 watt hours per mile), or 6.24 km per kWh (160 watt hours per km) divided into the distance of 104.5 miles results with 26.8 kWh of usable energy consumed from the battery. Kia advertises the battery as 27kWh. For comparison, the Nissan LEAF advertises 24kWh, however that has led to confused consumers when the battery really only has 21.3kWh of usable stored energy when new.

We have not physically measured the energy consumption with external instruments, however using a common 200 – 240 volt charge station that can provide the Kia Soul EV with 30 to 32 amps, I would expect approximately 85% charger efficiency. Therefore, to recharge the car from a depleted battery to full would require approximately 32 kWh as measured from the charge station. We expect the maximum capacity of the battery to be 30.5kWh (typically the “advertised” capacity of other manufacturers).

This car is very well suited to take on the world leader in this class, the Nissan LEAF, both in range autonomy, but also in regard to a host of other small improvements (like the heated and cooled seats). I think the folks at Nissan better look over their shoulder! Congratulations to the Kia folks for a truly well done car.

Editor's Note:  Tony is also the R&D Manager at Quick Charge Power, which has some good stuff when it comes to your electric vehicle's charging needs