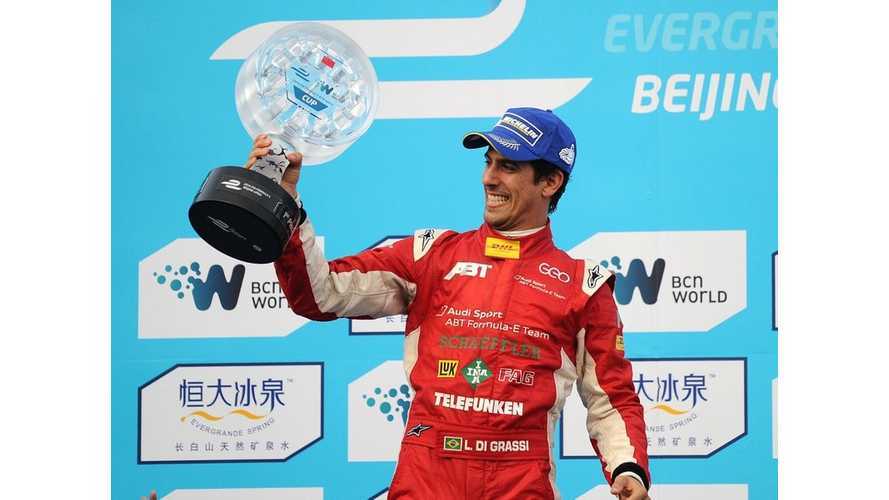 The first-ever Formula E race is now behind us and it sure had its share of exciting moments, including a crash.

Video of the entire race below:

Here's a look at the finishing results for the Beijing Formula E race:

Planet F1 details the dramatic ending of the race as follows:

Di Grassi started the race second on the grid in his electric-powered Spark-Renault SRT_01E.

Down to third place as the race entered its final lap, the Brazilian jumped into the lead when Nicolas Prost and Nick Heidfeld clashed at the very last corner.

Heidfeld had closed in on Prost with four laps to go and on the final lap made his move for the victory.

Closing on the pole-sitter down the straight and into the final corner, Heidfeld drew alongside the Frenchman only for Prost to turn in on him.

The impact sent Heidfeld's car into a kerb that launched him into the air. The Venturi driver hit the wall, the fence and rolled before landing upside down. Thankfully he was not hurt.

Heidfeld Tweets Of Incident On Track

That crash allowed di Grassi to jump into the lead and to capture victory at the first-ever Formula E race.

Heidfeld was not pleased with the move made by Nicolas Prost:

"I placed it perfectly for the last corner and I guess the TV pictures show quite clearly I was alongside, Nico pulled alongside me."

"We spoke after the incident and he obviously has a different opinion than I do. Maybe he change his mind when he watches the tape. I'm sure it is possible to overtake there. It is disappointing, but I'm not mad at him. This is racing."

Two videos of the crash below:

The Formula E racing series now takes a two-month break, returning on November 22 in Malaysia for the Putrajaya ePrix.