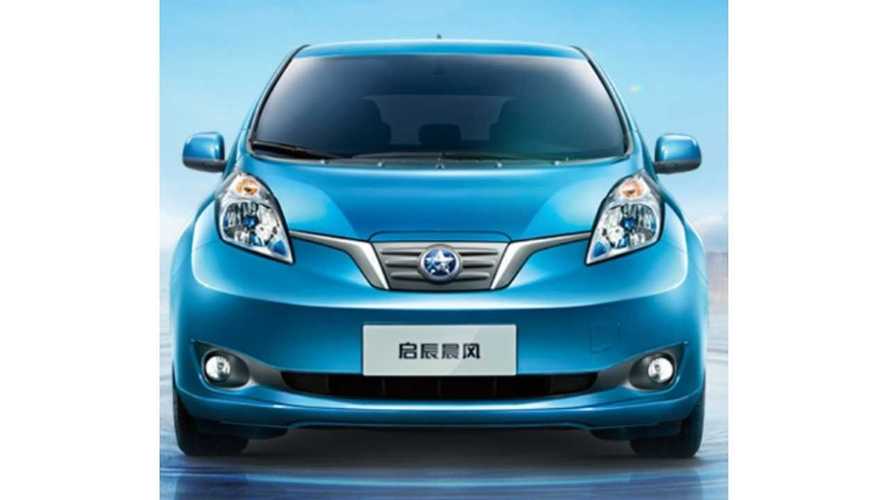 We Were At Auto China 2014 Earlier This Year And Caught Up With The Venucia E30 In Person ... It Really Is A LEAF

Dongfeng-Nissan has officially launched the Venucia e 30 in China.  And in so doing, the company as set a benchmark of sorts as Nissan is the first Japanese-based to build and sell an EV in China.

Pricing starts at RMB 267,800 ($43,400 USD), but as the Venucia brand is a joint-venture with Dongfeng...and is actually built in China, let the subsidies flow!

Naturally some executive types made some statements which we feel quai-obligated to pass on:

Jun Seki, President of Dongfeng Motor Co., Ltd. (DFL), Nissan's joint venture with Dongfeng Motor Group Co., Ltd., said, "With Nissan Global's advanced technology, sales experience and know-how of electric vehicle, the Venucia e30 has been locally developed through our careful studies about market situations and consumer needs in China. I am looking forward to seeing the Venucia e30 lead China's electric-vehicle market into the future and also to more development of new energy vehicles and the wide adoption of electric vehicles in China."

Given the expense of gasoline in China these days, Nissan says powering the e30 via the plug is 7 times cheaper than gasoline.

Did We The Accoutrements Are Stripped Down A Touch In China? (via PC Auto)

For the 2014 launch, the Venucia e30 will be available in just 9 cities; namely Beijing, Shanghai, Guangzhou, Shenzhen, Dalian, Wuhan, Tianjin, Zhengzhou and Hangzhou.

Nissan expects the car to be availably nationally at some point in 2015.

The current e30 is based on the current LEAF platform, but has a few less starting options than the LEAF the rest of the world is familiar with.

Given that the LEAF's current other worldwide assembly facilities (Smyrna - USA, Sunderland - UK, Oppama - Japan) are expected to begin a changeover to the 2nd generation vehicle in about 24 months, we expect the 'newer' e30  version of the first generation LEAF will live on much longer in China.

"The five stars of the brand logo represent the company's five brand promises – respect customers, create value, do the best, achieve world-class quality and seek the dream." So Chinese." draggable="false">

A "More You Know" Moment We Just Had To Pass Along --- Dongfeng Nissan Says Of Their Logo: "The five stars of the brand logo represent the company's five brand promises – respect customers, create value, do the best, achieve world-class quality and seek the dream." So Chinese.