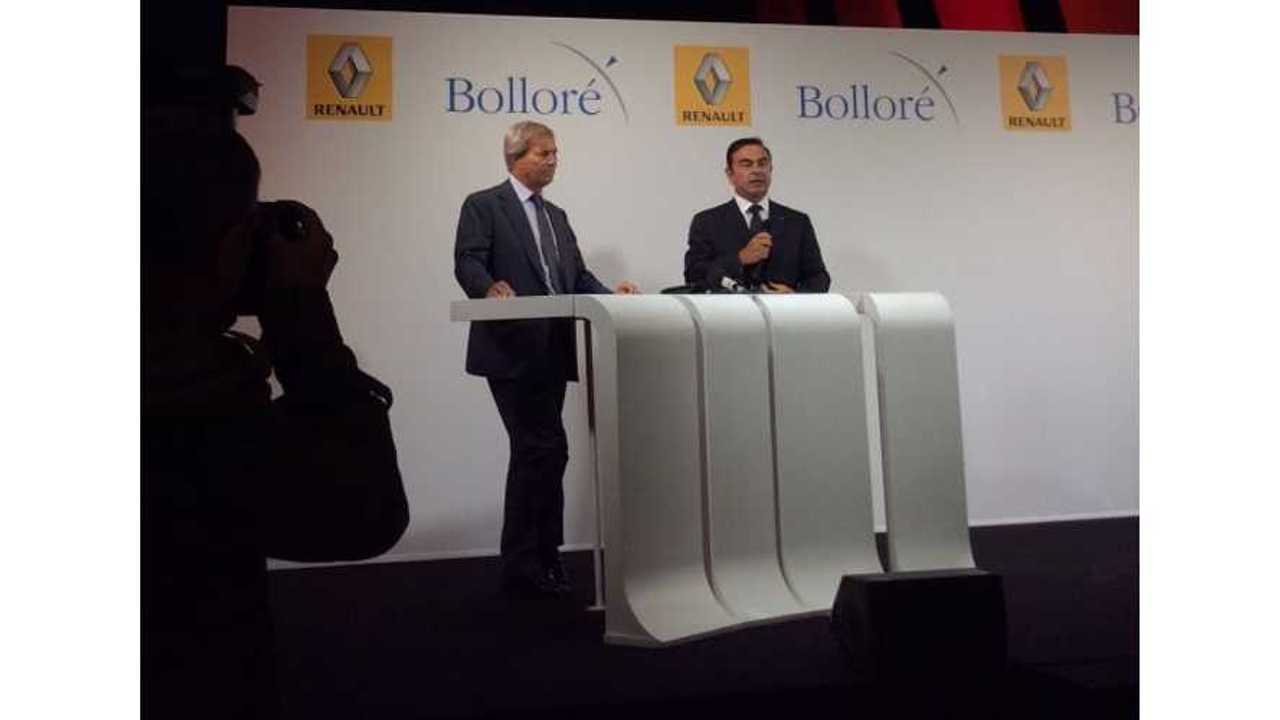 Renault and Bolloré forged a new alliance for electric vehicles after following the letter of intent signed in September 2013.

According to Renault, car-sharing is not an option - it is a necessary transformation to significantly reduce the environmental impact of cars.

The first agreement is about moving production of Bluecars from Italy to France from the second half of 2015 on. Renault should be helpful to Bolloré, as Bolloré dosn't have its own assembly facility.

The Bolloré Group has commissioned Renault, European leader in electric vehicles, to gradually take over assembly of the Bluecar, formerly built solely in Italy. The vehicles will be assembled at the Renault plant in Dieppe (Normandy, France) from the second-half of 2015. For the Dieppe plant, this decision is an acknowledgement of its expertise and a promise for its future activity.

The Dieppe plant specializes in building vehicles in small series. It currently builds Clio IV R.S. and is set to build the future Alpine, scheduled for launch in 2016. The Dieppe plant will be able to rely on the expertise of the Renault group in electric vehicles to acquire the skills necessary to assemble this type of vehicle. A new final assembly workshop will be set up specially within the plant to build these vehicles. The Bolloré group will thus have access to a modern production tool tailored to its requirements and delivering a significant reduction in costs.

The second agreement heralds expansion, because a new joint-venture in car-sharing (30% interest for Renault, and 70% for Bolloré) will operate not only in France, but also in the whole of Europe with an aim to win and install complete electric car-sharing solutions.

Moreover, Bolloré will include Renault Twizy along Bluecars in warmer cities like Lyon and Bordeaux.

2- founding of a joint-venture in car-sharing

With a number of cities now taking coercive measures to address air quality and congestion by limiting traffic, the Renault and Bolloré groups have decided to set up a joint-venture, whose aim will be to win and install complete electric car-sharing solutions in France and Europe. The Renault group will hold a 30% interest in the joint-venture, while the Bolloré group will own 70%.

As part of this agreement, from the second-half of 2014, customers using car-sharing networks in Lyon (Bluely) and Bordeaux (Bluecub) will be able to choose a Twizy, a vehicle that is different but complementary with the Bluecar, already available on a car-sharing basis in both Lyon and Bordeaux.

Renault vehicles will be gradually integrated with the car-sharing fleet to reach a proportion of 30% as quickly as possible.

There is also new EV in pipeline - the 3-seater bluecar with 20 kWh battery pack. 3-seater because for car sharing purposes 4-seater is often an overkill. If such a vehicle will be developed, Renault will handle production.

3- feasibility study for a 3-seater bluecar

The Bolloré group has asked Renault to conduct a feasibility survey on the design, development and production in a Renault group plant in France of a smaller car than the existing Bluecar (three seats instead of four), able to support the expansion of car-sharing initiatives. This vehicle could also be sold to consumers, companies and municipalities.

This electric vehicle will ship with a Blue Solutions lithium-metal-polymer (LMP) battery with a capacity of 20 kWh.