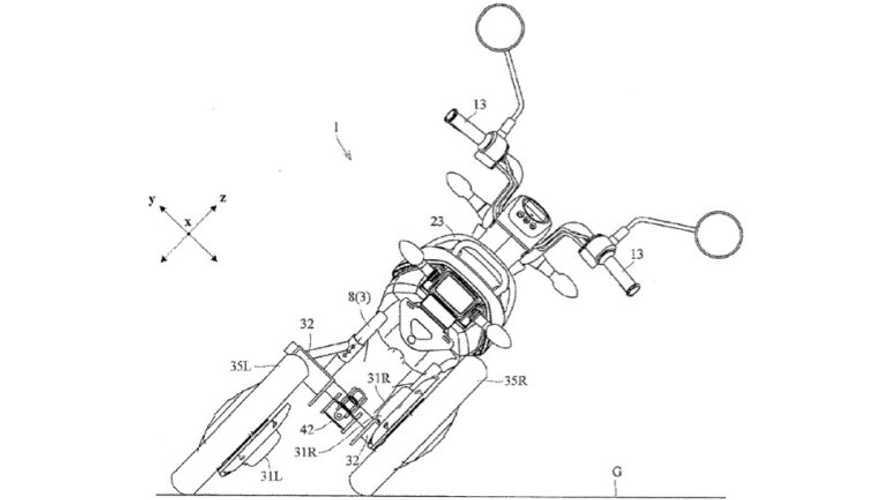 File this under two categories: "I'll Believe It When I See It", and "Just Because You Can, Doesn't Mean You Should".

Autoblog, among others, reported that Yamaha filed a patent last week for a three-wheeled electric-powered leaning motorcycle.  Out of all the stories on this topic, the Autoblog post provides you with all the interesting links to stuff like the PDF of the actual patent. (And yes, we're using the term "motorcycle" loosely.)

The patent filing is cool.  But means nothing, really.

Why?  Filing patents on products, just because you can, is a common strategy from companies who flirt with emerging technology and manufacturing.  Here's why, from IPStrategy.com:

"There are two good strategic reasons why any operating company should have patents, and they both relate to financial return on investment:

1. To use a monopoly, suggested or realized by patents, to get a higher margin and/or higher revenues for products or services. 2. For the value of the patents themselves, either in license fees, enforcement proceeds, or asset sales.

There are may be other reasons why companies might have patent portfolios but they can all be tracked back to these two strategic reasons. An example is a start-up seeking higher exit value because the patents embody some protection on higher margins or market share. Another is for corporations, where patents may represent implied or definable value to investors in a fund raising. Ensuring “Freedom to Operate” is, practically speaking, just another way of maintaining margins and revenues at a reasonable level, and above zero in the worst case scenario."

There, that's your business management snippet for today.  If you want hours of internet patent-related fun, check out Google Patents.  Just don't tell your boss you read about it here when you get caught.

Electric three wheeled, and especially three-wheeled tilting things seem to share the same place in the public fascination as electric one-wheeled things, no matter how unlikely they seem.  Obviously, one reason three-wheelers are attractive is because they stand up by themselves.  In some cases, the one-wheelers do too, come to think of it. The Tilting Vehicles Blog is perhaps the last word on all tilty-type stuff, and definitely worth a visit.

But just to keep this Yamaha announcement in perspective, remember what Kawasaki unleashed last year?

...yeah.  Any chance we'll see that in production?