Nissan LEAF And Chevy Volt Go On A Camping Trip 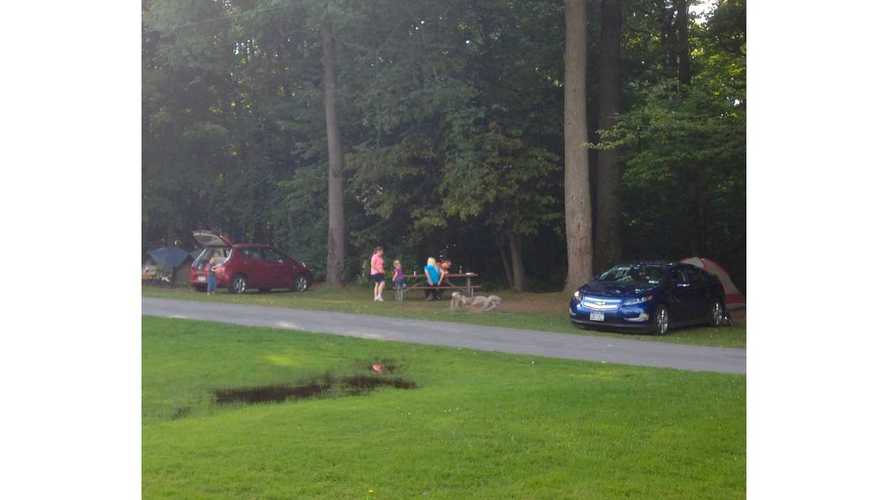 No, that's not the start of a lame joke.  Rather, it's what took place a week prior to Labor Day, 2014.  I decided to go try the you're-not-really-camping activity of car camping at Wellesely Island State Park, NY nestled within the Thousand Islands at the border of the United States and Canada.  Owning a Chevy Volt, I had no concerns with making the 100-mile trip up there, as once my battery ran out after about 40 miles, the gas engine would kick in to let me travel the remaining distance.

The views in the Volt were mostly limited to the interstate pavement, and map images from the built-in navigation.

When making my reservation, I found that they had some tenting sites with electricity.  I decided I would reserve one of those, and then I could charge my Volt overnight, using that much less gas on my return trip. A couple days prior to the event, I was speaking with a good friend of mine Brian, who owns a LEAF (and often posts here under the name Brian), and decided to see if his family wanted to join us.  Much to my pleasant surprise, he accepted, and found one of the last sites available to reserve with an outlet for that weekend... which just happened to be adjacent to my own site.  Now, given the LEAF's range of approximately 80 miles, this would require some planning on Brian's part, but he was more than willing to give the trip a shot, as was his wife and his two children.

It turned out to be a great time, and from the EV vs. EREV perspective, an interesting experiment.  From an activity standpoint, we got to relax at the beach, do some minor hiking, cook some camp food, and observe an amazing view of the Milky Way without the light pollution of a city.  Now onto the trip comparison...

Once the battery range was depleted after 36 miles of interstate driving, the Volt's gasoline range extender kicked in for the remainder of the trip.

As one might expect, the Volt made it there the quickest, in about 2 hours of mostly interstate driving.  The return trip was the same, and a full charge overnight allowed for an overall trip MPG of 74.6, and 3.6 miles per kWh when on the battery; not too shabby for cruise control mostly set at 70-75 mph.

Of course, on the other hand, Brian used infinitely less gasoline in his LEAf, though his trip did take about 8 hours one way - and 16 hours adding in both directions.  He experienced a low battery warning as he was arriving to the campsite, but still made it without any issues.  As an added bonus, he was able to stop at a nice friendly diner (twice, once in each direction) with a free charging station to enjoy some food and make sure he had enough electricity to make it the rest of the way.  He also was able to do some bowling with his family, and even got to see a very impressive solar panel array as a result of his route that he chose to get some charging along the way.  Using side roads at an average speed of about 35-40 mph, he averaged roughly 4.4 miles per kWh.

Brian getting some free opportunity charging at Longway's Diner in Watertown, NY.

So which vehicle was the better choice?  Well, as usual, the answer is "it depends."  I obviously got there the quickest in my Volt, though my views were limited to the interstate and the pictures shown in my navigation maps.  Brian's trip may have taken much longer, but I might argue that he had a great adventure that allowed his family to see and experience a lot of different activities on the way up, making his vacation that much more entertaining.

Obviously, I'm ignoring many other metrics that could be compared, that also relate to a family's individual needs and wants.  In the end, it comes down to personal preferences.  If nothing else, the trip proves that both vehicles are capable of a 100 mile journey to do some overnight camping, while saving a lot of gas compared to conventional vehicles.  And with sufficient planning and patience, a LEAF can make the drive too, allowing an opportunity for some enjoyable activities along the way that may otherwise be missed.

The LEAF's journey included spotting this enormous solar panel array near Watertown, NY; even the panorama doesn't do it justice!