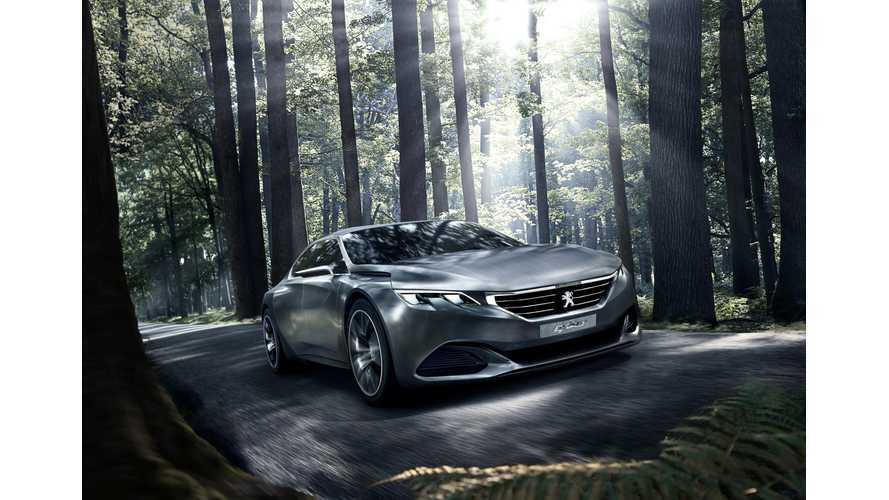 At the upcoming 2014 Paris Motor Show in October, Peugeot will present the EXALT concept plug-in hybrid (petrol-electric) with combined output of 340hp in a new livery.

"PEUGEOT is showcasing the EXALT Concept Car in a new livery at the Paris Motor Show next month. The bodywork features shades of grey that emanate from the bare steel covering the majority of the exterior to the distinctive ‘Shark Skin’ rear end. Inside, the ‘Newspaper Wood’ finish borrows (literally) from the pages of major business dailies."

"The tailgate features an ingenious opening mechanism and provides easy access to the HYbrid-kick, an innovative electric scooter, stowed below the boot floor."

"With EXALT, PEUGEOT continues to build on the imposing vision of large-saloon initiated with the ONYX Concept in 2012. A vision embodied by materials that achieve a blend of balance, local sourcing, recycling-based production and more."

"This new automotive experience is powered by a petrol-electric HYbrid4 drivetrain with a combined output of 340hp."

The car weighting 1,700 kg (3750 lbs) and featuring a 1.6-litre THP 270hp four-cylinder petrol engine and six-speed automatic gearbox in the front, has also a 50 kW electric motor on the rear axle.

HYbrid4 drivetrain enables it to drive in all-electric, petrol-only or as a petrol-electric hybrid modes.

Here is press blast on the concept:

With its sleek, athletic lines, EXALT embodies all the power of PEUGEOT design. Sitting on wide tracks with powerfully rounded wheel arches, the five-door saloon expresses its style over a length of 4.70m, combining flat surfaces and straight-cut lines to strike the perfect balance between aggressiveness and softness.  EXALT is unashamedly radical, stripped of any superfluous materials to retain only what is necessary. All materials have been carefully selected with an eye to efficiency.

“The PEUGEOT EXALT is athletic, powerful and sleek, sporting an array of original materials. Its cabin, trimmed in natural materials, is dedicated to comfort and instinctive driving. This innovative concept makes the saloon even more attractive and more versatile, in particular the tailgate, with its unique opening mechanism and large boot.”

In homage to the art of the French motor car from the twenties and thirties, the car's bare steel bodywork is hand-formed by a master panel-beater.

EXALT is one of a kind, offering a fresh take on time-honoured traits synonymous with automobile passion: taut, dynamic lines, a high waist line, a raked windscreen, a low roof (just 1.31m), a very slender profile that conceals a nonetheless spacious cabin, tightly shaped side panels with basalt-fibre sills and 20-inch wheels.

The long bonnet grows out of a particularly expressive front end, where the twin headlamps, set into the bumper, integrate the Brand’s recognisable signature lighting. In the middle, the distinctive grille emerges from the bodywork and provides the backdrop for the PEUGEOT Lion badge. At the bottom, the flow of air supplying the engine is divided by fins housing the LED indicators.

To improve the drag coefficient, the rear of EXALT is trimmed in ‘Shark Skin’, an efficient textile that draws on ‘bio-mimicry’ to create a technical grain structure that markedly improves the aerodynamic performance of the vehicle and reduces fuel consumption. This feature is highlighted by Coupe Franche - a clear line between the rear door and the quarter light that creates a sophisticated tone-on-tone transition between the bare steel and the grey of the ‘Shark Skin’. The result is a finish notably different from the version seen at the Beijing Motor Show last April.

The material contributes to EXALT’s aerodynamic performance—with a SCx of 0.6 - alongside other elements, including an air extractor in the rear bumper, the curve of the roof and the profiled mirrors. With such remarkable aerodynamics, EXALT's impact on its surroundings is visual more than anything else, enhanced by a horizontal band in the hollow of the rear spoiler showing the width of the car and the sculpted facet of the lighting signature.

“With EXALT, PEUGEOT has unveiled its vision of the saloon, combining a sleek design with versatility. This radical approach and EXALT’s original qualities make it instantly desirable.”

The PEUGEOT EXALT also offers exceptional versatility for a saloon. The tailgate features an innovative pantograph mechanism, which allows maximum opening while needing less space externally. The tailgate and integral motorised hobby flap reveals a boot with a low load sill, providing easy access to the HYbrid-kick Concept - a foldaway electric scooter stowed below the boot floor that represents an ideal addition when it comes to covering last-mile mobility. Its ease of use makes getting around town so much easier.

“PEUGEOT holds a unique position in the market with its range of two-, three- and four-wheeled mobility solutions. Combining an electric scooter with our EXALT Concept demonstrates PEUGEOT's ability to offer an integrated, innovative solution to cover last-mile mobility requirements.”

“This project was inspired by the world of music, in which harmony is a fundamental notion. Notes come together to create a score that is profoundly moving. This is how technology and tradition merge together in EXALT. In the PEUGEOT i-Cockpit, the raised digital instrument panel combines with a number of toggle switches. The result is pure and timeless.”

The PEUGEOT i-Cockpit delivers an intense driving experience dedicated to enjoyment. The small steering wheel is trimmed in leather and chiné—a natural wool-based mixed fabric—and the digital instrument panel is intuitively arranged in front of the driver to improve operation and visibility. On the extended centre console, two folding touchscreens emerge from the dashboard. The upper screen gives access to the on-board computer and the Hi-Fi and navigation systems. The second screen presents a permanently visible control bar to provide access to the automatic air conditioning and the ‘Pure Blue’ system.

The dashboard features nine toggle switches, the design of which is borrowed from the world of music. They are arranged in two groups: two to the left of the small steering wheel; seven to the right. This layout was adopted because of the human brain’s ability to easily remember up to seven items, with regard to position and function. The driver is also free to assign functions to the switches, as desired: access to navigation with one switch, vehicle settings with another, etc.

Activation of the black light system can also be assigned to one of the toggle switches. Built into the headlamps, this system is particularly useful when driving at dawn or dusk: visibility issues are reduced and driving becomes more relaxed with black light improving the clarity of road markings.

For the comfort of its occupants, the PEUGEOT EXALT is fitted with an innovative air treatment system called ‘Pure Blue’. When the vehicle is stationary and unoccupied, Pure Blue emits bactericides and fungicides to purify the cabin surfaces. Once the vehicle is moving, an active filter treats the air before it enters the cabin, eliminating volatile organic compounds (VOC) and fine particles. As a result, driver and passengers can always travel in a purified environment.

“The PEUGEOT EXALT features raw and natural elements paired with innovative and efficient materials. The idea was to finish the car with useful touches and to do so intelligently, with a view to constantly optimising processes to economise on the use of materials and reduce waste. This responsible approach is also applied in the local sourcing of materials, such as replacing the Asian ebony used in China with Newspaper Wood in Europe.”

The PEUGEOT EXALT advances the approach initiated by the ONYX Concept in 2012.

In a nod to the work carried out on the body of the vehicle, bare steel is used to accentuate the car's expressive lines. Associated parts such as the wheels are also kept bare to highlight the markings left by the milling machines.

Steel remains bare in all areas where it does not come into contact with the four occupants. At the elbows and arm contact points, EXALT is trimmed in warm toned wood. From the bottom of the windows, it gives way to a natural wool-based chiné fabric used to trim the door panels, the dashboard and the interior roof. Between these two materials, a 3D-printed strip conceals the speakers of the Hi-Fi system. Its structure draws inspiration from anechoic chambers where the dihedral partitions reduce acoustic interference.

The PEUGEOT EXALT provides the utmost comfort for passengers and driver alike. The bucket seats made of composite material feature seat squabs and backrest in chiné fabric with side areas in aged leather. Fabric and leather are worked together in a process that optimises the use of resources. To avoid off-cuts and waste, the fabric is shaped using clamps. This simple process takes inspiration from the tradition of the finest gentlemen’s tailoring to create surfaces with crisp folds and no stitching.

Leather used in cars is traditionally selected for the absence of markings then tanned to make it flawless. The EXALT Concept optimises the skins, drawing on these apparent imperfections to make each a unique signature. Then the leathers are aged naturally, without the use of chemicals.

As part of the campaign to ensure sourcing as close as possible to relevant markets, in China, EXALT used ebony, chosen because of its plentiful growth in Asia; in Europe, this material has been replaced by ‘Newspaper Wood’, which, as the name implies, is made from recycled newspapers. This new type of wood has evolved since its initial use on the ONYX Concept. It is now obtained by recycling business papers, creating a distinctive salmon-pink hue.

Finally, carbon fibre gives way to basalt fibre, a natural composite. Produced by smelting the stone of the same name, basalt fibre reduces the use of petrochemical resources."