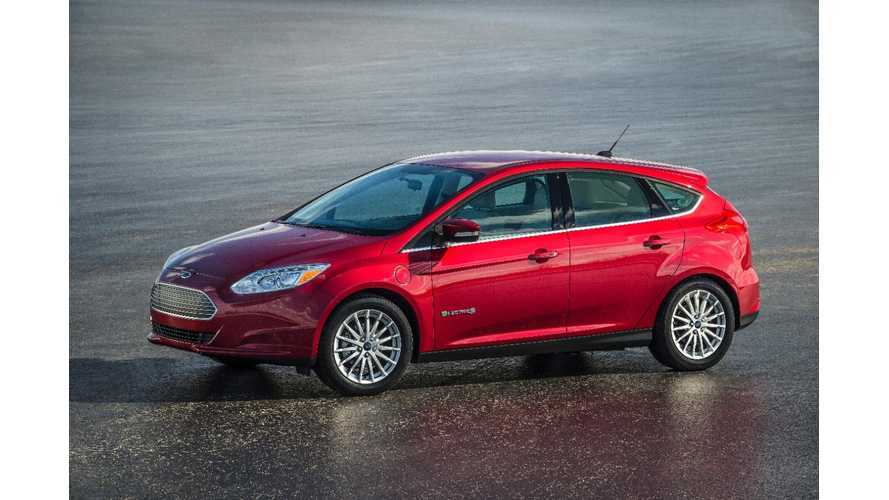 The Ford Focus Electric has always been a sturdy plug-in offering.  It features a familiar and popular platform, fitted with a 23 kWh battery offering 76 miles of electric range.

And while many of the standard features (such as standard 6.6 kW charging) are superior to that of the monthly BEV sales king - Nissan LEAF (from $29,860), the plug-in Ford has always had two problems

However, sometime next week Ford will announce that the Focus Electric is as competitive, if not more, than the LEAF in one aspect - the price.

First reported by John Chady at Havill Spoerl Ford Lincoln on Wednesday at the MyFocusElectric forums, the price of the 2015 Focus Electric is getting a $6,000 haircut, down to $29,995.

A quick check of online inventory shows that 2014 Ford Focus Electrics now seem to have adjustments to equate to a $29,995 MSRP base (before additional clearance incentives are applied on top)

UPDATE: AutoBlogGreen got this quote on Monday from Ford spokesman Aaron Miller, confirming and commenting on the price change.  "We hope by reducing the price we're giving consumers another reason to consider it."

At the same time, the Ford rep said that the best market to date for the plug-in Focus was on the West Coast, but noted it was also doing well on East Coast. Regionally, Atlanta (where is a further $5,000 sate-level discount) and the Great Lakes area (ie-Michigan) also see "decent" sales.

And while you might still have to twist your local dealer's arm to acknowledge the existence of the Focus Electric and to order you one, it certainly can be argued that the best value to be had today in "EVs under $30,000", can be had at Ford.