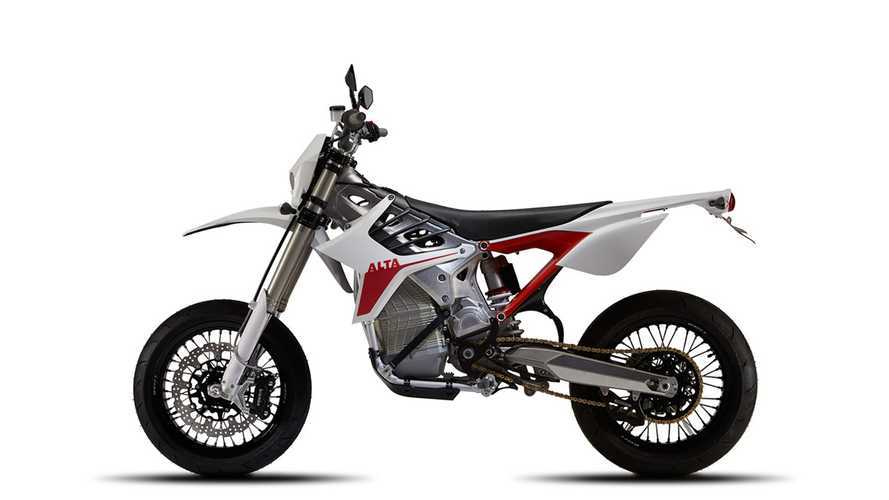 In an unusually detailed and non-press-releasey press release, Alta gave some very interesting details about its company, its bikes, and the tech we're going to see in them.

We're going to start by cherry-picking the release (out of the Florida show this week) with what caught our eye, but you can read the entire release at the bottom of the page.

"40 horsepower from 11lbs of motor - Pound for pound the most powerful motor in the industry."

This is astounding.  Just to talk apples to apples, let's convert that to kilowatts, the commonly used description of an electric motor's power capacity.  40 hp is about 29kW, and that's usually a peak rating - that is, if you ran the motor continuously at that kind of power it would probably melt - but at a peak rating of 29kW you can compare this motor to others that weigh over twice that.  They're claiming it's a liquid cooled motor that was designed and built by them.  And, "13,750 RPM".  To put this into perspective, most AC motors run at a top RPM of half that, or less.

Well, at 70lbs and 5.2 kWh, that's about right for most of the top-end battery chemistries, at about 165 Wh/kg, so no miracles here.  The Panasonic chemistry used by Tesla rates about 245 Wh/kg, and the fairly legendary A123 cells go for around 120 Wh/kg.  Good, but not as astounding as the motor specs.

What's that you say?  A light dirt bike with a swappable pack?  Sort of like having a DeWalt drill with batteries you can carry along and swap out with fresh ones?  Read on.

Oh, so not so much.  But still, easily removable, upgradable, all that.  So the light weight is not so much due to the pack chemistry or design, but more due to a very light frame and motor.

Now, some interesting information on why it's taken so long:

"We developed our own liquid-cooled motor, our own motor control, and our own battery pack. We developed a new method for manufacturing a motorcycle chassis to house these new components that were shaped nothing like their gasoline counterparts.

And when our first effort was good, but not quite there, we revisited every part of our new bouncing baby. We discarded 2 years of development and, specifically, one of the most advanced battery designs out there. This was a really hard decision, especially for a shoestring startup of five people.

What is the result? The result is that every single part on the bike changed. "

Interesting.  Rather than beta-test and re-design based on customer experience, here's a company who quite literally goes back to the drawing board when they realize they've eclipsed their own work - especially in the context that they're designing the components from scratch, with the theoretical capabilities as a goal, rather than simply what's readily available.

Orlando, FL - October 16, 2014 - This has been a long time coming, and we're incredibly excited about the new bikes. We've got a lot to tell you, and we figured we'd make it easy and break it down in bullet points so you're not having to skim a bunch of fluff to get to the good parts.

What is a Redshift? To start, it's a full-scale motocross race bike. Racing focused Forged and cast chassis WP race-spec suspension for both models Brembo brake components

Retail price is $14,995 for the off-road only RedShift MX, and $15,495 for the street-legal Redshift SM. 40 horsepower from 11lbs of motor - Pound for pound the most powerful motor in the industry. 251 lbs for MX; 264 lbs for SM - Every test rider has commented that it rides lighter. This is a function of the mass centralization and reduced giro forces.

Delivery starts in 2015 Q2 for CA, then broadens to the rest of the US in Q3 No break-in or warm-up for an Alta RedShift. Just turn it on and ride. 50 miles range under aggressive riding. Enough for a full outdoor moto and most riders, in our experience.

The battery offers best-in-industry performance Mile for mile the smallest, lightest battery in transportation Engineered for 1,000hrs and 50,000 miles Proprietary patent-pending lithium-ion tech Swappable pack Weighs 70 lbs 2-person job, 5-10 minutes based on experience Because it is swappable and self-contained, it is planned to be backwards compatible with our next generations of packs.

The unloaded seat height on the MX is 38 inches. The SM will be lower but we're still finalizing the suspension tuning on the SM. The charger is integrated and charging takes 4 hours from a standard 110V - you can charge from other sources with a pigtail, but 110V is the most ubiquitous charging network in the country. There are a lot fewer J1772 stations than gas stations; there are a whole lot more 110V outlets than gas stations. Warranty is 1 yr, unlimited mileage Sold only through premier motorcycle dealerships. No direct sales.

Okay, now the fluff... why did we do this? Because we all want to be fast. We all want to progress and improve - be faster than we were the day before. What makes a rider fast? Control. Control comes from the connection between the rider and the bike - part of that is smooth predictable power and part is the relationship that forms between a rider and a bike (usually through time and tuning). We chose motocross because in this format, we can fit enough energy on the bike to compete in conventional racing (more importantly, the formats of racing we love.)

How did we achieve our goals? First, we started from clean sheet. Nothing off the shelf came close to what was theoretically possible - it was like trying to go to Peterbilt to get a motor for an R6. We developed our own liquid-cooled motor, our own motor control, and our own battery pack. We developed a new method for manufacturing a motorcycle chassis to house these new components that were shaped nothing like their gasoline counterparts.

And when our first effort was good, but not quite there, we revisited every part of our new bouncing baby. We discarded 2 years of development and, specifically, one of the most advanced battery designs out there. This was a really hard decision, especially for a shoestring startup of five people.

What is the result? The result is that every single part on the bike changed. The basic architecture remains, and most importantly, so does the amazing ride experience. But everything about the production bikes are sharper, lighter, smoother, stronger, easier, and more efficient in both material and energy. Here are a couple of highlights: The front bulkhead of the chassis was changed from a patented casting design to a even newer patented system of forgings. This gives us drastically more control over frame stiffness, and increases the strength of the system 40% with no additional weight. The new battery pack is 4" shorter and 15 lbs lighter than our gen 1 pack. The Redshift's battery now has superior ground clearance, optimized CoG, and is responsible for most of the 20lbs saved between the prototype design to the production design. We've created something that we believe is up to the real rigors of off-road and supermoto racing. We've created something that we think is going to make most riders faster, better, more competent. We've created something that for us is more fun than anything else we have in the garage. We've also created something that is likely the fastest legally-plated vehicle in any city on the planet.

We've poured our souls, our blood, and five years into making the best motorcycle we can - we hope that shows in every surface, and bolt head, and twist of the grip on the RedShift. We aren't done; this is just the beginning for the RedShift and for Alta.