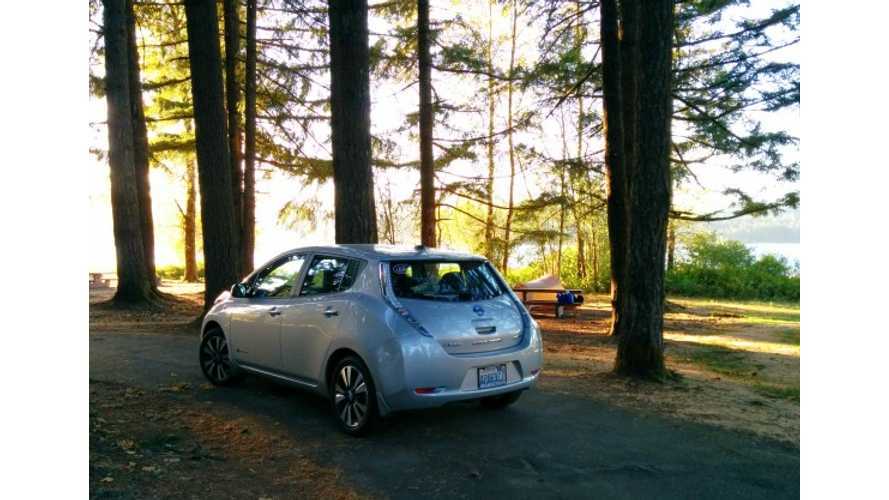 Our Path After 3 Days

First of all, I would like to apologize for not writing earlier. After each of the first two days, we were both very tired after lots of driving and visiting with folks along the way. Also, we didn’t have any connectivity the first night so I couldn’t post anyway.

Over 700 people have been regularly checking our live map at ZEroadtrip.com, along with 175 followers on our Facebook page and 76 followers on Twitter. I hope that the stuff we post is interesting to you all!

Starting last weekend, we drove the short 17 miles from the Canadian border in Lynden, WA to Bellingham, WA, near our home. Then, Monday morning, we left our home and resumed the journey south.

Three days into our journey, we’ve now traveled 466 miles (750 km). We have used 112.4 kWh of energy. Along the way we were greeted by about a dozen people at Magic Nissan of Everett, several staff and one local LEAF owner at Bill Korum’s Puyallup Nissan, long-time LEAF owner David Laur outside of Olympia, several LEAF owners at Electric Avenue in Portland, and a couple LEAF owners just outside of Albany, OR. It has been really great to see people along the way, to share our knowledge and also to learn from them.

One frequent question from other LEAF owners we encounter in person and via social media is for technical information on how the ZEroadtrip.com site works. I will write another blog post at a later date about this. I do hope to some day make this functionality available to everyone.

Sometimes we forget to post on Facebook & Twitter for a while, and as I noted we haven’t blogged much either. This trip is first and foremost our family vacation, so our personal priorities come first. We’re doing this trip for fun. We appreciate all of you who are following along with is and will continue to communicate, but just keep in mind that it may not be particularly frequent due to these facts.

Along the same lines, this morning we made a personal choice to change the plan for our trip. Instead of following Interstate 5 down to the California border, we are going to divert directly to the Oregon coast on Thursday. We’ve added a couple additional stops along the coast so that we end up going back up the coast on the same original timeline. The primary reason for this choice was that the weather forecast calls for temperatures in the mid 90s F (mid 30s C), which is warmer than either of us would be anywhere near comfortable. It will be about 20 degrees F (10 degrees C) cooler on the coast, so we’ll be much happier there. And a family vacation is much more fun if we’re happy.

Those of you who were expecting us in the areas of Grants Pass, Medford, and Ashland, we apologize for this change. Hopefully next time we come down it won’t be as hot and we’ll be able to come down and visit.

So we will be driving from Cottage Grove to Reedsport on Thursday. This isn’t a very long drive so we have no concerns. We’ll stay in a hotel in Reedsport Thursday night, then head down to Port Orford the next day, where we’ll spend two nights at Humbug Mountain State Park. We may travel further south during this time, possibly to the California border, but that’s still undetermined. After that we’ll head back up to Reedsport to resume our original plan.