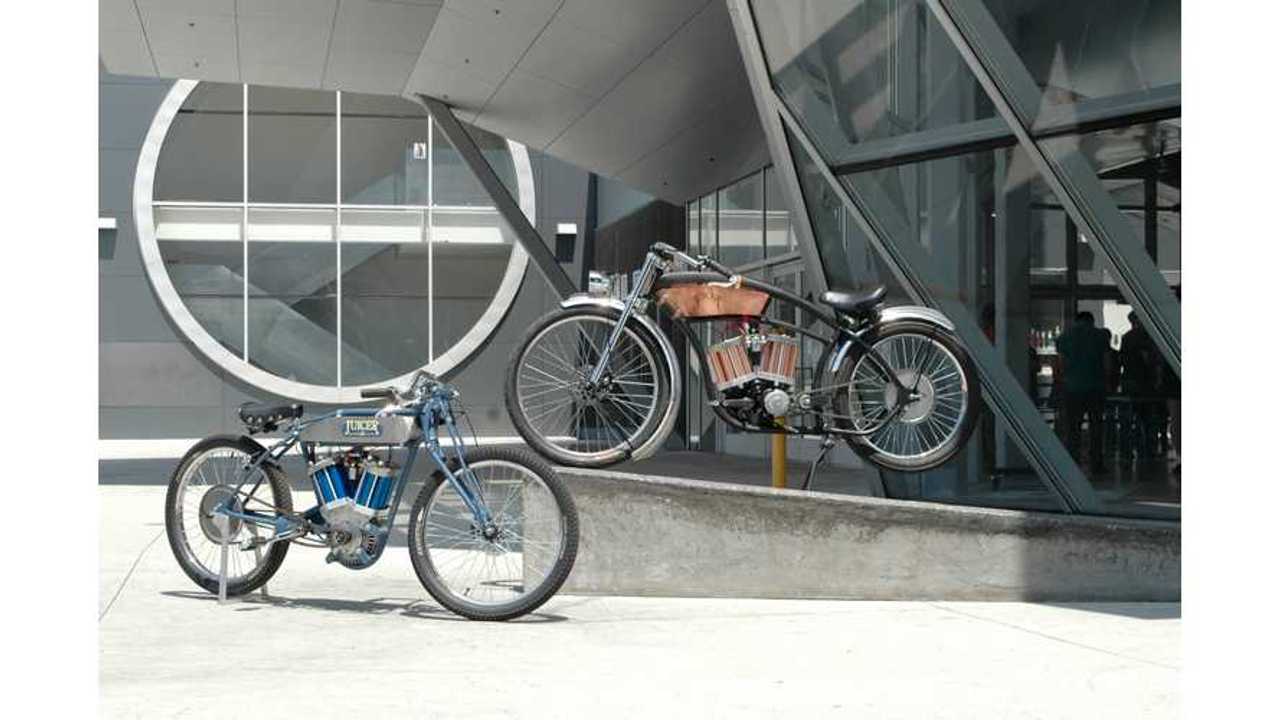 The Juicer eMotorbicycle, by David Twomey

In our travels around the world of electric propulsion, we sometimes stumble upon gems of genius, and this is one of those instances.  May we present: The Juicer.

Juicer eMotorbicycles has two models: The Citizen, a 36V Stretch-Cruiser, is a heavily (and beautifully) Deco Era styled copper-and-chrome dresser with all the amenities – even fenders, a headlight and horn.  This is a street-legal bike, considered a moped in California. It’s capable of 22mph and a 20 mile range without pedaling.  It’s got a 2-speed transmission.  Yes, you read that right.  Two speeds.  It’s running a 1000W Currie motor and Headway LiFe04 cells.  Brakes are a coaster-brake operating on its large-patch 3” rear tire, along with a 160mm disk-brake up front.  It’s running swept-back bars and a Cloud Nine saddle.  It sells for $3300.

The "Ranger" is the original Juicer model, and is running a genuine Etek brushed DC motor at 48V, a Headway lithium pack (LiFePO4) lasting ~2000 charges, weighs in at about 90lbs with a disk in the front and a y-brake in the rear.  It will give you around 30 miles at 20mph, and sells for $5000.

Juicer eMotobicycles is the creation of David Twomey, a UCLA Design graduate who has made his living, on and off, as a Graphic Designer, Illustrator, Comic artist, Medical Illustrator, Multimedia Designer and Storyboard artist.  He started his company, Juicer eMotorBicycles, in September of ’10, and he started it with a very clear vision. His target market includes “… people found at WWF events, NASCAR races, monster-truck rallys, and who watch nitro-burning funny-cars after church on SundaySundaySunday!”  Twomey’s not so much interested in preaching to the converted, he’s a true evangelist – he’s trying to spread the word among those who may not be so convinced by “a hybrid or electric with wheelbarrow-sized wheels”.

He has a traditionalist, purist view of motorcycle design which translates to the Juicer build: “The controls are intuitive to motorcycle riders; throttle and front brake in the right hand, rear foot brake.  Where others have used digital volt meters I use analog dials.  The power-switch is located and functions similar to the petcock.  As far as appearance, my philosophy is that the primal appeal of the motorcycle (especially to males) is that it exposes its machinery.  So, while other ebike manufacturers have sought to hide their battery packs, I show mine.”

The reasoning behind this?  To pull in motorcycle enthusiasts.  By the heart… not necessarily aiming for the brain.  “So with a foot in each world, I am positioning the Juicer brand to recruit fans of American Chopper, not by arguing eco-rectitude, but by channeling the sexiness of the greatest gas-burning machines of history. … It has to look like Steve McQueen jumped it over Knob-Hill or a row of barbed wire before landing in the showroom.  These machines will be sold, not with graphs and charts, but with squealing rubber and carshow bimbos.”

Twomey's inspiration?  That can be found on his Facebook page:

Find the Juicer eMotorBicycle at Holloywood Electrics, here.  The Juicer home page is here, at eMotorBicycle.com.  They also have a Facebook page that has a lot more in the way of photos and updates, so “Like” them here: Juicer Facebook Page.