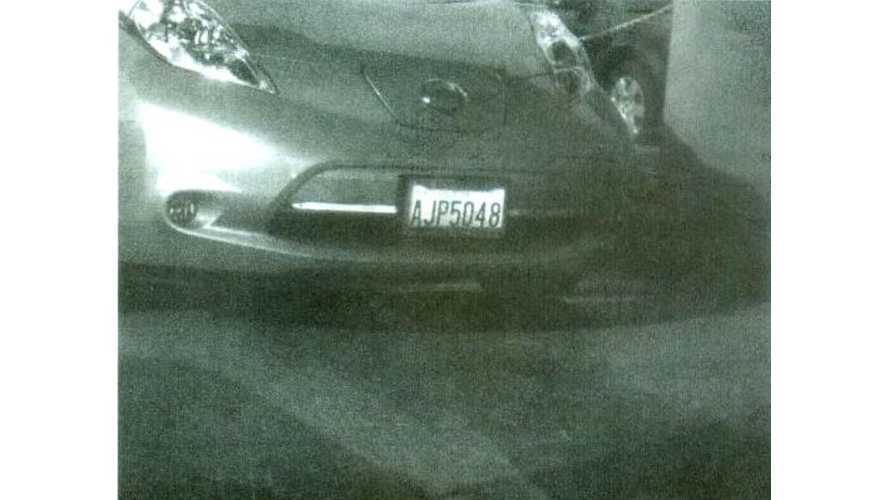 I have never been a car person.

Scratch that: I *had* never been a car person, until we stumbled into EV world by leasing a 2012 Leaf. That heaven-blue wonder was my first "car person" car. So it will always be close to our hearts, even though it was only a lease.

Yup, this is the current Google Street View of our home, starring the 2012 Leaf a few days before it was returned.

Our two-year lease was due late August, but starting in May, various outfits at Nissan started pestering us with emails, phones, letters and pigeon-grams explaining how great it would be to dump it earlier and get a new one. Particularly tone-deaf was Magic Nissan, the dealership who had leased us the 2012: they sent us a brochure full of ICE Nissans, with no mention of Leafs.

Anyway... by early July these corporate pests, and the dwindling 2014-model inventory (have you noticed? Nissan only sold the 2014 for 6 months!), managed to wear us down. I signed a new lease almost 2 months ahead of time, and on the 12th drove to Eastside Nissan, dropped off our 2012 and picked up a shiny silver 2014.

I was still intensely curious too see what befalls our Leaf Ex. See, I decided that the way to maximize our contribution to EV adoption is to lease-and-return every two years until the technology matures sufficiently. Beside being a reasonable techno-financial strategy at present, this maximizes the number of EVs we help put on the road - and also enables people of more limited means to get their hands on affordable used EVs. All that, of course, depends on our Ex EVs finding a new home, starting with the 2012 Leaf. Hence my curiosity.

Given that we had driven it only for an extremely low 8.4k miles in two years, I thought the dealership would rush it to market as an excellent resale prospect. That dealership has a couple of used Leafs advertised at any given time. I trolled their used for-sale pages for weeks on end, and nothing. Nothing showed up on the regional Craigslist either. For about a month, the CARWINGS connection to the 2012 still worked. It showed almost no movement. The car was just sitting somewhere. Then the CARWINGS line went dead, with a message indicating that either someone blocked the connection, or it just died out because the Leaf hadn't moved for 14 days (which seemed about right).

What was going on? Does Nissan, despite all assurances to the contrary, scrap some of its Leafs? Was our Leaf Ex selected for some secret experiment, removing it from the road? If the car isn't in circulation anymore, our putting-EVs-on-roads strategy is bust.

And then, when nearly all hope was lost, our beloved 2012 Leaf sent us a selfie. Isn't it a charming one?

My wife actually thought it was some kind of identity-theft scam. But fortunately, that very morning I did learn, via someone nice at Magic Nissan, that it was sold at auction in August, and registered in New Jersey shortly afterwards. The quoted violation date was August 21. So the selfie is legit.

Actually, the letter reads more like a ransom mob from the Mob: "Pay this ($2.60 + $50 'fees') or we'll ruin your life". The website's opacity and the hostility of the person on their phone line reinforced the Mob notion.

So I called Eastside Nissan, after all they are the ones who told me in July to leave the license plates on (I came equipped with a screwdriver to take them off). Eastside said they deal with this kind of thing all the time, just send them a copy of the selfie and they'll handle it. I called the Mob again, just to make sure they don't send scary people to us (or to our credit rating) before the paperwork is sorted out. This time I got a much nicer gal who told me I can chill, they can't do anything for 30 business days anyway, a tiny fact that was missing from the letter, She explained the omission along the lines of "we prefer to mess with people to make sure they call us".

And there you have it, your Leaf will likely have a life after you. Possibly - just like the Classic Ex - it will be a more interesting life than the one it had with you, so eat your heart out. And next time I return a lease, I will remove the plates regardless of what the dealership people say.

PS: if you have access to a free detailed VIN check, feel free to share the full vehicle history. I scribbled the VIN next to the selfie but here it is in copy/paste mode: JN1AZ0CP3CT024379.