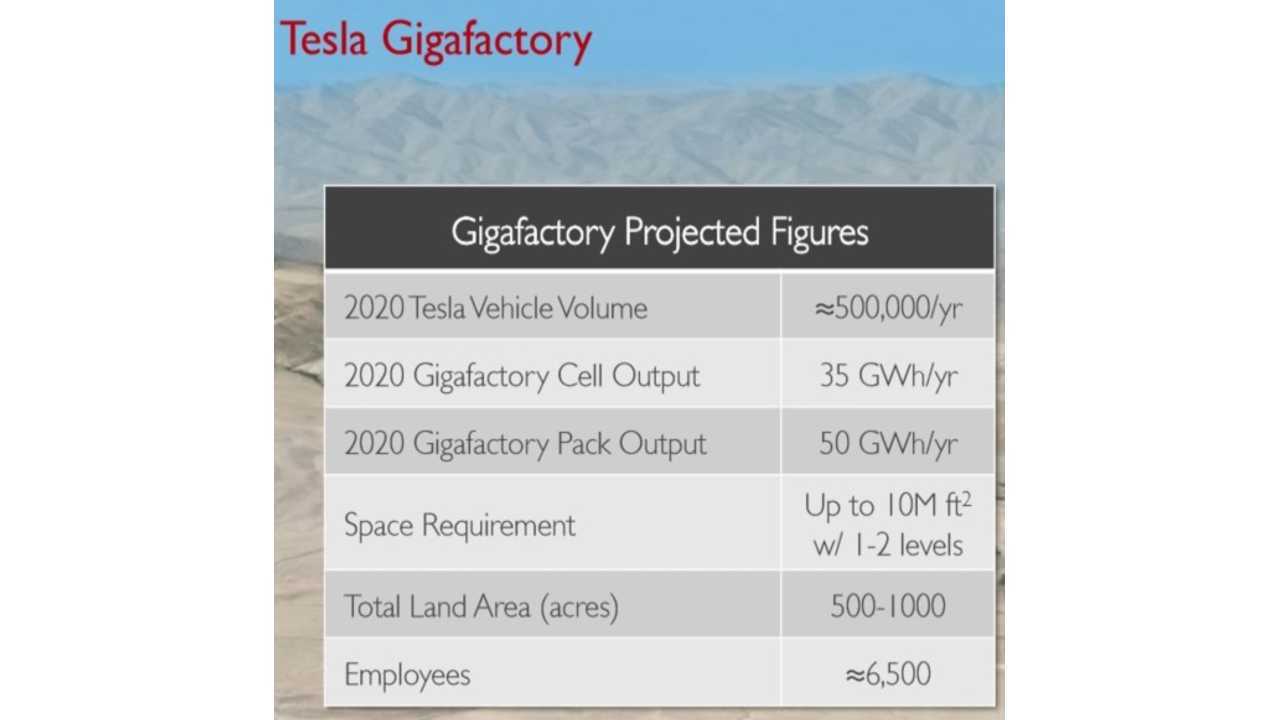 Will the Tesla battery gigafactory be a true game-changer for electric vehicles?  Or is it just lots of hype over something that will have little actual impact?

The analysts at Lux Research are on the anti-Tesla side of the fence, as you'll witness immediately in this Lux Research press release that we've produced below in its entirety:

The 35 GWh lithium-ion cell production facility, in partnership with Panasonic, will cut battery cost in a lower-cost electric vehicle by only $2,800, and create overcapacity as Tesla likely misses its target of selling 500,000 electric cars in 2020, Lux Research says.

BOSTON, MA – September 3, 2014 – Tesla Motors’ plan to build a new 35 GWh lithium-ion cell production facility – dubbed the Gigafactory – for electric vehicles that will bring about only a modest reduction in battery costs, and create significant overcapacity, given likely sales of less than half the targeted 500,000, according to Lux Research.

Tesla and its partner, Panasonic, will contribute about 45% and 35%, respectively, of the initial $4 billion required to build the Gigafactory, proposed to go on-stream in 2017. An analysis by Lux Research projects sales of only 240,000 cars in 2020, leading to razor-thin margins to Panasonic and 57% overcapacity.

“The Gigafactory will only reduce the Tesla Model 3’s cost by $2,800, not enough to sway the success of the planned lower-cost EV,” said Cosmin Laslau, Lux Research Analyst and the lead author of the report titled, “The Tesla-Panasonic Battery Gigafactory: Analysis of Li-ion Cost Trends, EV Price Reduction, and Capacity Utilization.”

“Besides, Lux’s analysis reveals significant overcapacity because Tesla will miss its ambitious target of half a million,” he added.

Lux Research evaluated Tesla Motors’ Gigafactory plan and its consequences for the EV industry. Among their findings:

Cost-cutting is the name of the game, but the Gigafactory does not do enough. Battery prices need to fall dramatically if plug-in cars hope to break beyond their current niche. The OEMs backing the U.S. Advanced Battery Consortium are targeting $125/kWh by 2020 – more than four times lower than $520/kWh, the price Ford paid for its Focus EV battery packs. Currently, Tesla has the lowest cost – about $274/kWh, according to Lux Research analysis. Tesla founder Elon Musk aims to cut cost by 30%, on the strength of scale, location and technology, lowering the price to $196/kWh with the Gigafactory. Panasonic faces risks. The Gigafactory might seem like a great win for Panasonic, ahead of rivals such as Samsung SDI, LG Chem, and NEC. But in reality the Japanese company faces high risks. In the optimistic scenario of Tesla attaining its targeted half a million EVs, Panasonic could rake in more than $15 billion between 2017 and 2020. But at the more likely 240,000 EVs, as estimated by Lux Research, Panasonic would take in only $7 billion on its likely investment of $1.4 billion, with questionable margins.

Gigafactory will lead to huge overcapacity. The Gigafactory, proposed to be built at a cost of $5 billion, is designed to make 35 GWh Li-ion cells for half a million EVs. But in the likely event of much lower sales of 240,000, overcapacity will be to the extent of 20 GWh. This 57% overcapacity is unlikely to be filled either by rival carmakers or Tesla’s own plans to sell some stationary battery packs to developers like SolarCity for residential photovoltaic integration and other uses.

Lux Research provides strategic advice and ongoing intelligence for emerging technologies. Leaders in business, finance and government rely on us to help them make informed strategic decisions. Through our unique research approach focused on primary research and our extensive global network, we deliver insight, connections and competitive advantage to our clients. Visit www.luxresearchinc.com for more information.