Exclusive: The Brammo Fire Sale - The Story Behind the Story 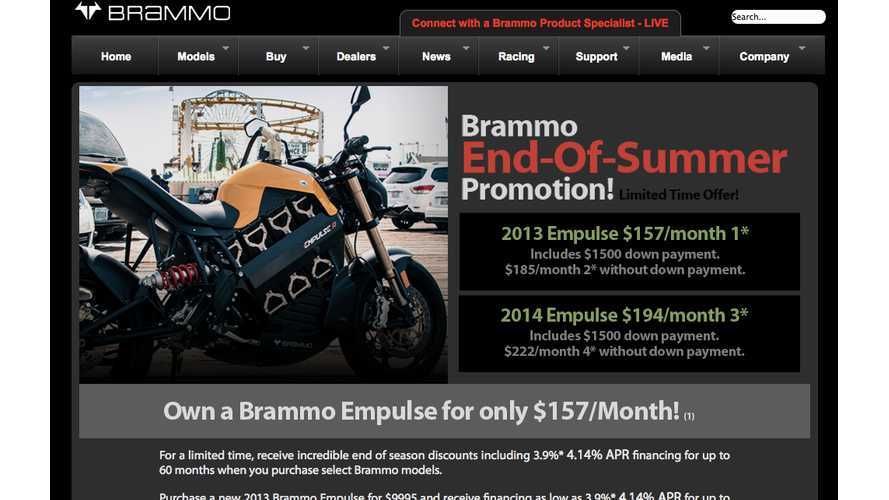 Last week, we reported that Brammo was offering a rare End-of-Summer Sale, and almost instantly the online community went ablaze with speculation about the whys and wherefores of this offer.  Naturally, the reactions ranged from excitement and interest, from those who had been window-shopping and hoarding their pennies, waiting for just the right time to pull the trigger on a new Brammo, to frustration expressed by recent buyers at their bad timing.  There's another thread of discussion there too: Why would Brammo make such a drastic move?  Are they in trouble? Are they offering a new model and clearing the shelves?  Or are they looking to preen themselves for the reported IPO we're expecting in 2015?

To compound the speculation frenzy, the Ashland (OR) Daily Tidings reported that Brammo was working hard at keeping jobs here in the US, and expanding it's offerings:

"Eight months after Brammo, Inc. moved into its cavernous new quarters, the message is clear — the electric motorcycle maker has room to grow in multiple directions. And that manufacturing growth will occur at home rather than overseas."

This quote from Brammo CEO Craig Bramsher is of particular interest:

"Initially you always hope you can build a consumer brand that becomes the next Nike, Apple or Tesla," Bramscher said. "We still have a vision for that, but we're finding is that expertise we've developed in trying to build a product like the Empulse and bringing it to market, is that we've created a set of skills and capabilities that are beyond motorcycles. I didn't really think we'd get into business-to-business side and start supplying batteries, motors, controllers and a complete solution to other companies, but that's actually a very big growth area for us."

It doesn't take much of a jump to come to the conclusion that Brammo may be considering scaling back motorcycle operations in favor of a B2B supply line.  Rather than feed the flames with more speculation, we asked Adrian Stewart, Director of Marketing at Brammo, some pointed questions.

The first question is a simple "Why?"  Why is Brammo making such a dramatic and unprecedented move?  Stewart's response:

As you know at the end of each selling season most of the OEMs drop prices to move out inventory from dealers – and make physical and financial space for new model year products.  If we assume all OEM’s lower their prices then hopefully it stimulates increased sales but market share remains relatively stable across the OEM’s.

What we wanted to do this year was lower prices to a point where we would increase both sales AND increase our unit market share through to the end of the year.  With that in mind we lowered prices quite aggressively and offered attractive financing -and we announced both of those promotions earlier in the selling season than usual.

For anyone interested in making the purchase, we need to know if Brammo intends to discontinue current models being blown out and offer a new line for 2015?  Facing an off-season purchase and months before a nice, warm ride is in the offing, it's hard to compound that with an instantly obsolesced model.  His answer:

...we remain committed to the Empulse platform and there will be a 2015 model year Empulse. This pricing action is not the prelude to a total new consumer model.

Regarding the OEM work with drivetrains and batteries mentioned in the Ashland Daily Tidings story:

We are definitely continuing to grow the Brammo Power drivetrain side of the business and that was always part of our strategy and investor pitch. Our strategic relationship with Polaris is a obviously a key part of that.

This Press Release from Polaris gives a bit of background into what that might entail: Polaris Industries Inc. Announces New Business Unit and Leadership Changes in EMEA Business.  From that release:

Under Homan’s leadership, the Global Adjacent Markets business will have responsibility for all Small Vehicles product lines, including GEM, Goupil, Aixam/Mega and Brammo, as well as all commercial, Brutus, government and B2B applications of Off-Road Vehicles (ORV), Snow and Motorcycles outside Polaris’ traditional dealer channels. Homan’s team will also have responsibility for all merger and acquisition activity related to adjacent markets. Polaris’ Defense product line will report financial results through the Global Adjacent Markets business, but continue to operate as a separate business line.

Here's some information on those individual components:  GEM, the "market leader in the low-speed vehicle (LSV) industry (with) more than 50,000 vehicles worldwide".  Goupil, a light-utility electric vehicle manufacturer based in France, and Aixam Mega, a light utility and small electric car maker also based in France.  Stewart adds that: "... scaling up battery design and production capacity was one of the key reasons to move to our much larger building (20,000 sq ft to 100,000 sq ft)."

What Stewart says about motorcycle OEMs offering year-end sales is pretty much on target - Yamaha, for example, is offering a year-end special of financing incentives and cash back on models like the R1 and others, but at nowhere near the levels of the Brammo offers.  Is the aggressive Special going to give them the "double whammy" of clearing out stock as well as giving them market share?  We can only guess, but in the fiercely competitive gas-powered market, you've got to think you'd see it routinely if such a strategy worked.  What manufacturer doesn't want market share?  It's possible that in a market with only two players, it may be a different story.

The OEM supply route - selling your drivetrain technology and expertise - isn't unique in this market.  We've seen Mission, for example, offer its drivetrain as a standalone almost since the day we first saw the Mission motorcycle, but with limited results.  Brammo, however, is uniquely partnered with Polaris - one of the largest motorsports powerhouses in the world.  That may have been the driving strategy behind that partnership from the start, certainly if it has "...always part of our strategy and investor pitch."

One question remains.  Will Brammo keep all their balls in the air? In spite what seems like a huge, full plate, and may even seem like managerial ADD to the more skeptical, Brammo is a fairly small company with limited resources.  Can they keep up with what is starting to feel like an exploding motorcycle market, while developing their OEM market, and, not to be forgotten, all this on a worldwide stage?

Then there's the Empulse.  Will we see a new, improved Empulse for 2015?  On that score as well, only time will tell.  We certainly will see a 2015 Empulse, but whether it will be as much of a breakout product as the 2014 Zero SR, we have no hint.  There are, of course, several internet rumors, one involving an Empulse RR replica.  We can only dream.