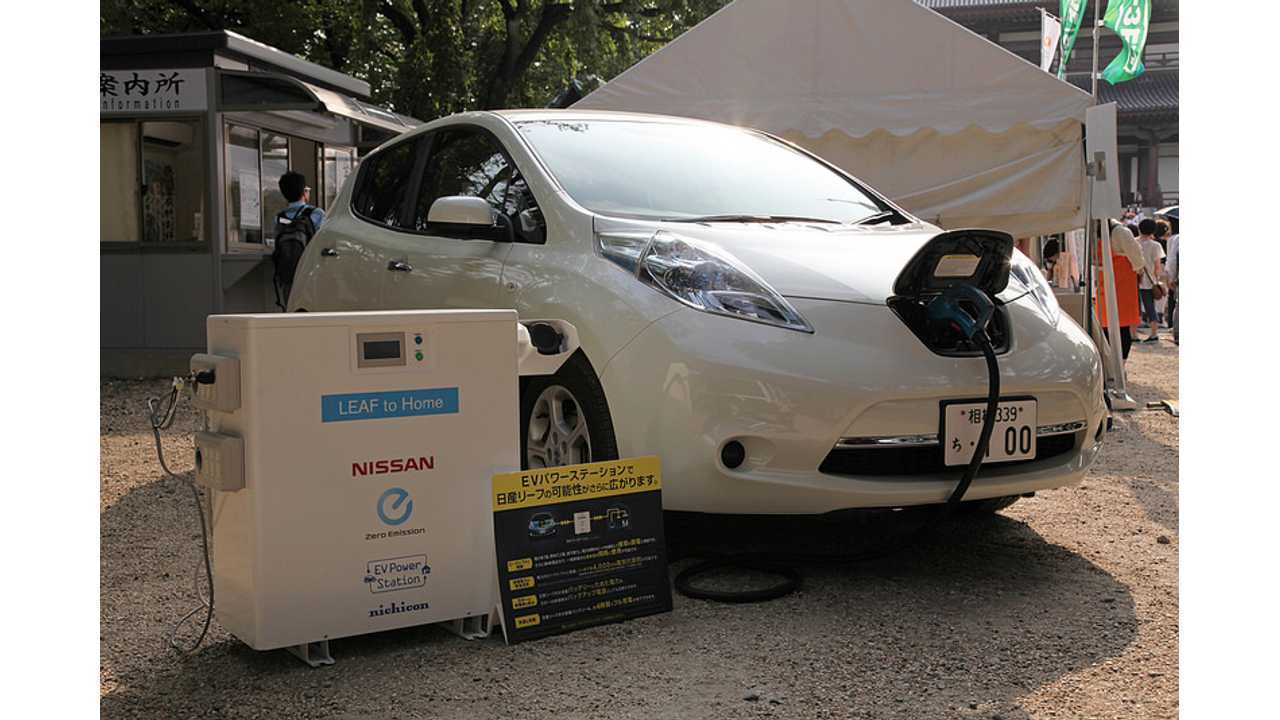 A 2013 Nissan LEAF Demonstrates A Little V2G This Summer

Nissan is participating in the "demand response" energy supply and demand system project, in which together with businesses and government authorities in Japan, the automaker will test the potential of electric vehicles in energy management systems.

In the case of Nissan and its LEAF electric car, there is an option to power external systems with "LEAF to Home" (via CHAdeMO) up to 6 kW.

This particular project will be focused on helping power grids cope with peaks in demand, but it could help to stabilize electricity supply from renewable sources.

Like net metering, V2G system are a step forward and the utility typically pays for reducing demand (renting your batteries).

"The tests are being conducted by ENERES Co., Ltd.. Nissan is using Nissan LEAF EVs paired with the LEAF to Home power supply system for demand response testing at several of its sales outlets run by subsidiary Kanagawa Nissan Co., Ltd. to assess the effectiveness of EV batteries when used for energy management."

"Demand response is a strategy to make power grids more efficient by modifying consumers' power consumption in consideration of available energy supply. Since the Great East Japan Earthquake in March 2011 the supply and demand of electricity during peak use hours in Japan has drawn attention. Under the demand response scheme, power companies request aggregators* to use energy conservation measures, and they are compensated for the electricity that they save."

"Usually when energy-saving is requested consumers may respond by moderating their use of air conditioning and lighting. However, by using the storage capacity of electric vehicles and Vehicle to Home (V2H) systems, consumers can reduce their use of power at peak times without turning off lights and appliances. This is particularly useful in commercial establishments where it is difficult to turn power off to save electricity."

"The demand response scheme involves assessing the usefulness of energy-saving measures using V2H systems during peak-use periods and analyzing the impact of monetary incentives on business. For example, the testing involves a LEAF and LEAF to Home system which is connected to power a Nissan dealer's lighting system during regular business hours using stored battery energy. This reduces electricity demand on the power grid. The aggregator is then compensated for the equivalent of the total amount of electricity that is saved. Two or three tests per month will be conducted on designated days for three hours' each time sometime between 8:00 a.m. to 8:00 p.m. from October 2014 through January 2015."

* Aggregators refers to businesses that coordinate two or more consumers (e.g. plants and offices) and trade with utility companies the total amount of the electricity they have succeeded in curbing."