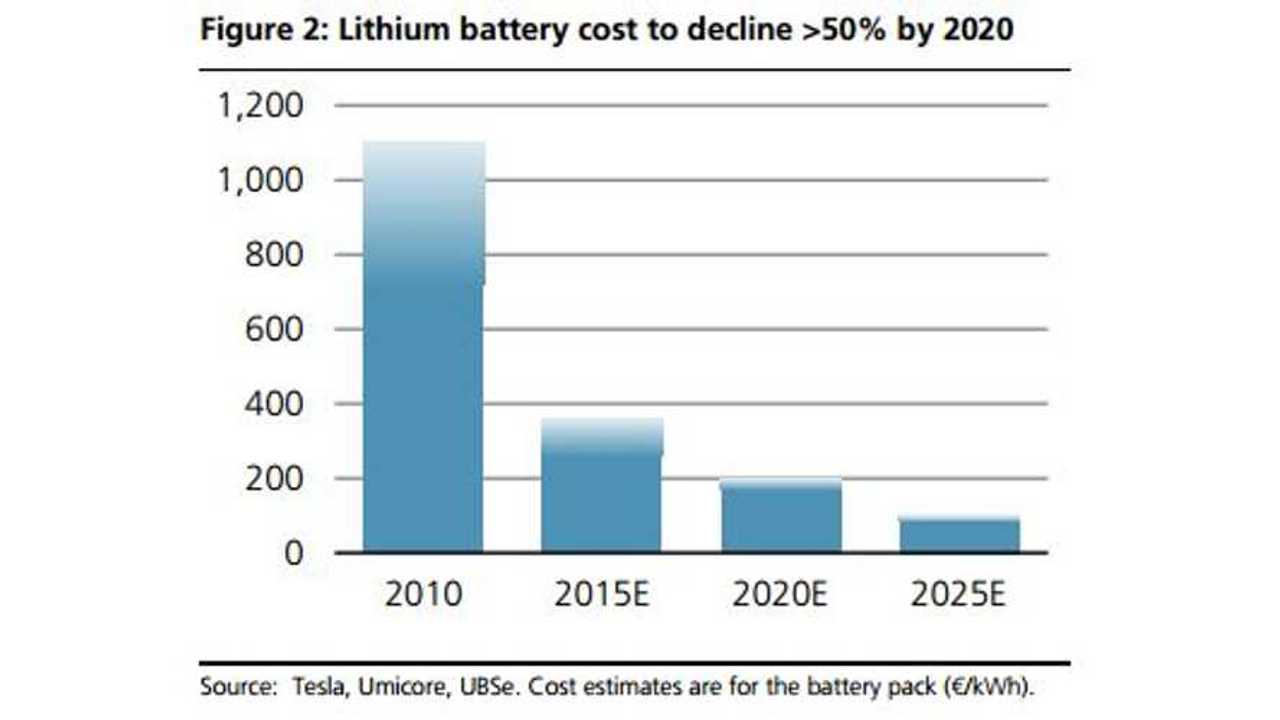 Last month investment bank UBS  released a report charting the disruptive triangle of solar, EVs, and energy storage. The report claimed that by 2020, payback time for unsubsidized investment in EVs, solar, and battery storage will be as low as 6-8 years – triggering global changes in the energy industry.

The report begins by stating that the solar panels and batteries will become disruptive technologies for the electricity system. Solar in many cases is becoming a competitive power generation technology as it approaches parity leaving the final hurdle, intermittency. This is where batteries and EVs come into play. Here are some highlights from the report.

"Can solar ever be economically viable without subsidies due to its intermittent character? Our answer: YES. The market is not yet looking at the topics of solar, EVs and stationary batteries with a holistic view. Our proprietary model shows it is the combination of the three that makes solar fully competitive and that has the potential to bring disruptive changes to the electricity sector. Here are the maths: One can leverage the EV purchase with an investment in a solar system and a stationary battery. By doing so, one can optimise the self-consumption of solar power and minimise the "excess waste" of solar electricity. And what also may matter to many EV buyers: The electricity used to drive the car is carbon-free. The combination of and EV + solar + battery should have a payback of 7-11 years, depending on the country-specific economics. In other words, based on a 20-year technical life of a solar system, a German buyer should receive 12 years of electricity for free (purchase in Germany)"

"This is why we expect a rapidly growing penetration with EVs, in particular in countries with high fossil fuel prices. Thanks to EV-driven economies of scale, we also expect the cost of stationary batteries to drop c50% by 2020. Based on UBS proprietary analysis, battery storage should become financially attractive for family homes when combined with a solar system (and an EV). As a consequence, we expect transformational changes in the utility and auto sectors"

UBS continues by forecasting 10% penetration by EVs in Europe by 2025.  UBS says that while the initial penetration will be due to incentives, they declare that it will continue because EVs pay off.  UBS forecast that battery pricing will fall by 50% by 2020 not only causing exponential growth in the EV market but also stimulating stationary battery storage both  commercial and residential.

"By then, a mass segment EV will have almost the same sticker price as the ICE, while saving up to €2,000 per year on fuel cost in the European market, hence, it will begin to pay off almost immediately without any meaningful upfront "investment".

Recently the LA times reported that the sales of electrified vehicles had stalled. While the author, Charles Fleming, has lumped hybrids (HEVs) together in his original report, he further states that plug-ins were soaring though still in small numbers. Fleming concluded that hybrid (HEV) sales have stagnated due to low fuel cost. The above UBS table suggest a greater second  factor which is the lowering in battery cost, thus offering another possibility effecting the shifting sales from HEVs toward EVs. UBS list current battery cost at $360/kWh. While lowering gas moves toward ICEs, lowering price of batteries, we point out, will move the market sooner toward EVs.  The price of batteries are falling faster than the price of gas, or improved ICE efficiencies,  thus effecting the ultimate outcome. Back to the UBS highlights.

"Later on we think True cost parity with ICE from a buyer's perspective will spur replacement demand especially as consumers see added benefit from self-generation of electricity as an additional cost reduction. This should lead to further economies of scale for OEMs, particularly in battery costs, and make EVs profitable for OEMs. "

“The expected rapid decline in battery cost by (more than) 50 per cent by 2020 should not just spur EV sales, but also lead to exponential growth in demand for stationary batteries to store excess power. This is relevant for an electricity mix with a much higher share of (volatile) renewables.”

“Large-scale power generation, however, will be the dinosaur of the future energy system: Too big, too inflexible, not even relevant for backup power in the long run."

UBS says centralized fossil fuel generation  will become “extinct” – and it will happen a lot sooner than most people realize.

“Our view is that the ‘we have done it like this for a century’ value chain in developed electricity markets will be turned upside down within the next 10-20 years, driven by solar and batteries."

“As a virtuous circle, lower battery cost will also spur EV sales, which should bring further economies of scale to batteries, also for stationary applications. Power is no longer something that is exclusively produced by huge, centralised units owned by large utilities."

“By 2025, everybody will be able to produce and store power. And it will be green and cost competitive, ie, not more expensive or even cheaper than buying power from utilities."

“It is also the most efficient way to produce power where it is consumed, because transmission losses will be minimised."

"The below figures explain why solar + stationary battery + electric vehicle (EV), in combination with smart demand, is an almost perfect fit. EV charging during the night smoothes the daily demand curve. The stationary battery stores excess solar electricity during the day and releases it in the evening hours. The remaining supply gap will be filled with electricity from the grid during the night/early morning hours, which is when spot prices are low and there is excess base-load and wind power supply. On top (not illustrated below), the stationary battery may be re-charged in the early morning hours with excess grid electricity (at low prices) and supply the morning demand peak during breakfast hours."

“We think large-scale power plants are the structural losers from this trend, as they are too big and most of them are too inflexible. ”

“Not all of them will have disappeared by 2025, but we would be bold enough to say that most of those plants retiring in the future will not be replaced.”

“Large-scale power stations could be on a path to extinction.”

UBS says in a note to clients:

“It’s time to join the revolution.”