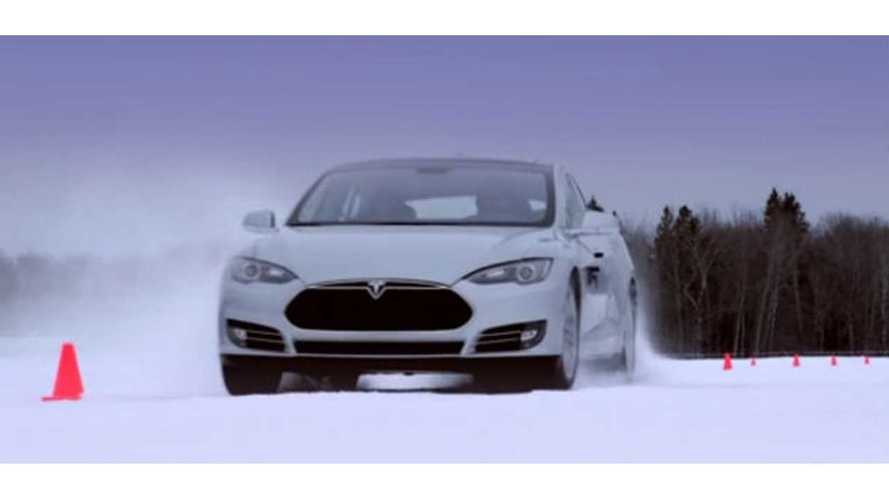 Pardon our Icelandic to English translation, but the verdict is unchanged: Tesla Model S P85 trumps four other electric vehicles in a series of winter tests.

Five electric vehicles were tested in the alps:

35 points were the maximum combined points that could be awarded in these tests: braking distance, handling, safety, range, heating, price and acceleration in snow.

The winner, with 25 points, was the Tesla model S P85.  In second place was the BMW i3 and in third was the Nissan LEAF.

The range test, without preheating, had the Tesla well in the lead:

Perhaps something is lost in translation, as we didn't expect to see the Tesla that far in the lead.  Here's the original text converted from Icelandic via Google Translate:

The car is not quite per­fect. A crucial test was how far could dri­ve the frost, but how many of my gra­de products is not availa­ble. The ot­her is known, the test was conducted wit­hout tanks were pretrea­ted for dri­ving. Was dri­ven cars un­til tanks tæmd­ust. Declared range up to 502 miles should not come as a surprise that Tesla drew far. But was remo­ved the book because she was of electricity af­ter 206.9 miles.

In the braking test, the field was more evenly matched.  Here are the stopping results from 31 MPH to 0 MPH (presumably all tested EVs are on winter tires):

Acceleration in snow with traction control disabled.  0 to 31 MPH: Now this...umm...seems lost in translation.  Best guess?  It has something to do with speed through a snowy slalom course:

This win for Tesla further affirms what the automaker has pitched all along: the Model S performs swell in the cold, ice and snow.  Kinda makes you wonder if there's even a need for an AWD Model S.