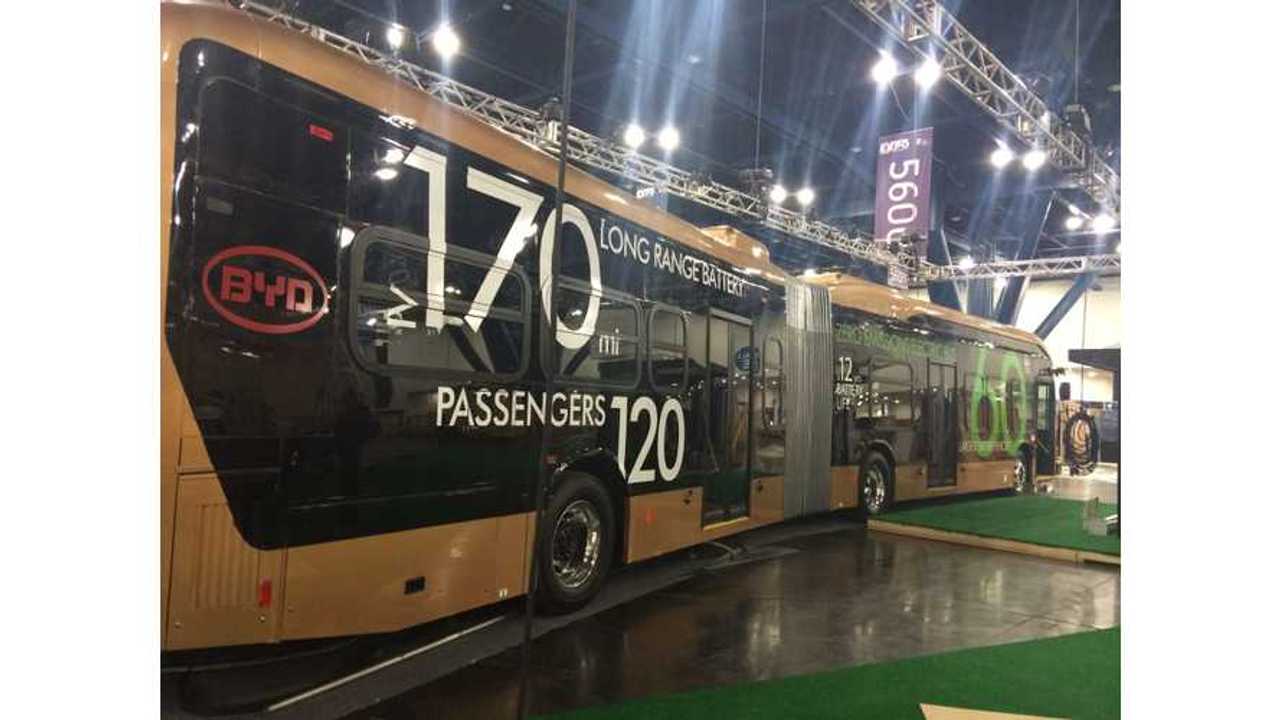 Hundreds gather at the beginning of BYD's APTA EXPO presentation -- they revealed a 120 passenger, battery-electric bus that could travel over 170 miles on a single charge and a 40-foot bus that drove 1500 miles California to Texas for $200 worth of electricity under its own power (charged along the way).

It's named “The Lancaster” after the city in California where it was designed and manufactured.

"BYD Motors is an American manufacturing company residing in an industrial zone in the city of Lancaster – they have now hired over 60 Americans to build clean-tech Electric Buses and Energy Modules out of Lancaster, California."

Over 170 miles of range, space for 120 passengers and more than 12-years battery life are the numbers appearing on the vehicle.

"The Lancaster eBus, a break-through, 60-foot, articulated battery-electric bus, can drive 170+ miles with a passenger load of up to 120 passengers, was in development for almost two years, and is an example of how committed BYD is to the American Rapid Transit markets."

"BYD's mission is to create safer and more environmentally-friendly battery technologies. This has resulted in the BYD Iron-Phosphate Battery, a fire-safe, completely recyclable, and incredibly long-cycle technology -- the foundation of BYD's Electric buses. These buses run entirely off battery power lasting up to 24 hours on a single charge, with single off-peak charging time of 2-4 hours. No additional generation capacity is needed to be built to charge our buses at night since the grid is only 40% utilized.”

On display at the BYD Exhibit was also a 40-foot bus from Antelope Valley Transit Authorit, which drove 1,500 miles from California do Houston on its own power recharging along the route.

AVTA Board Chairman Norm Hickling boasted that the 40-foot bus on the Expo show floor was the only bus, “that drove over 1500 zero-emission miles from Los Angeles all the way to Houston for the Expo under its own power.” AVTA tested BYD buses in the hottest part of the Lancaster summer in August with full air-conditioning running and with 5250 pounds of sand bags to simulate a full passenger load. He further stated, “We drove nearly 100 miles more than BYD advertises -- up to 250 miles per bus charge and we covered almost 750 miles in 24 hours! We are very impressed with BYD technology and quality.” The most interesting news about this 1500 mile journey to Texas is that it was completed for “$200 in electricity--the lowest cost trip to the show of all buses.”

"BYD is leading the Renaissance in Transit – a rebirth of electrified transportation…but this time without miles of electrified rails, ugly over-head wires or charging stations. If you look around the show floor, there are electric buses now at every relevant transit vendor! This is a complete reversal from the Expo three years ago when we were the only 40-foot, long-range, battery-electric bus on the show floor -- we are proud to say that we were one of the first and we are raising the bar again today!"