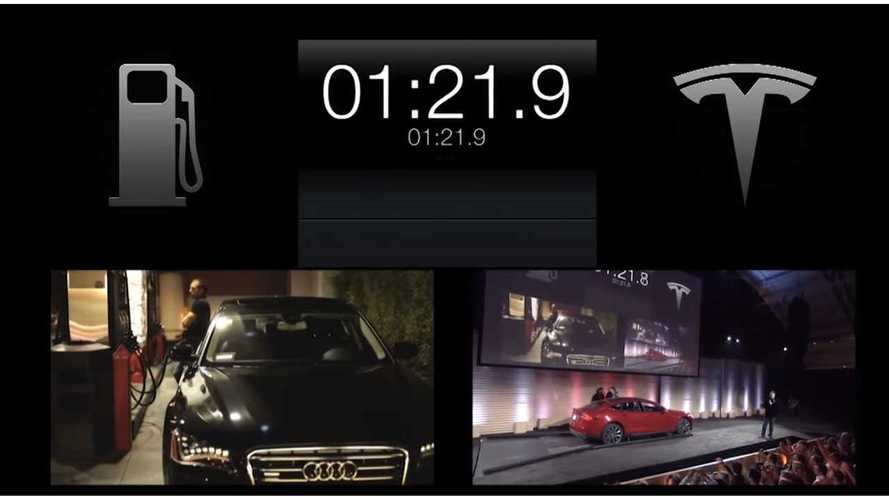 In sort of a cryptic comment at the end of a long summary of the Tesla Hawthorne, CA unveiling Oct 9, this story on Automotive News stated, and we quote:

"And in an update on Tesla's long-promised battery-swap program, he said that Tesla plans to open its first station, between Los Angeles and San Francisco, within the next two months."

Curiously, however, there's was no other record or report of this comment until SlashGear drummed up this highly questionable article that opens:

"Tesla will open its first battery-swap station within the next few months, the electric car company has confirmed to SlashGear."

Who at "the electric car company" confirmed this?

That SlashGear article then spawned an overload of rewrites claiming Tesla had confirmed the first battery swapping station, but those articles unknowingly trace their roots back to the Automotive News' statement that references Musk.  There's just one little problem...there's no record of Musk ever making that statement.  So, it all seems a bit, well...fanciful.

We're a bit divided on the subject of Tesla's battery swap idea here at InsideEVs, an even split between those who think it's a brilliant idea and those who think it's just stupid.  However, we've been following it closely since the very first announcement.  We even thought it was official.

The last interesting report on the project was from The Motley Fool, (What Happened to Tesla Motors, Inc.'s Battery Swapping?) granted, from a reporter who holds Tesla stock explaining his theories about why it's been delayed and why we (as investors) shouldn't worry (thus bolstering the value of his stock, presumably).  So we really wanted to hear this from the horse's mouth.  Which we didn't.

Going back to the full video released by Tesla of the Oct 9th presentation at the Hawthorne CA robotically-enhanced airplane hangar where the audience was prepped for their test drives (which we were not invited to...  ahem...)  we tried to listen for those special words:  "...plan to open battery swap stations...".  It didn't happen.  Listen for yourselves:

If you haven't been paying attention and have no idea what-all we're on about, here's the video that started it all, showing a "recharge-off" between gassing up an Audi and swapping out a Tesla battery: