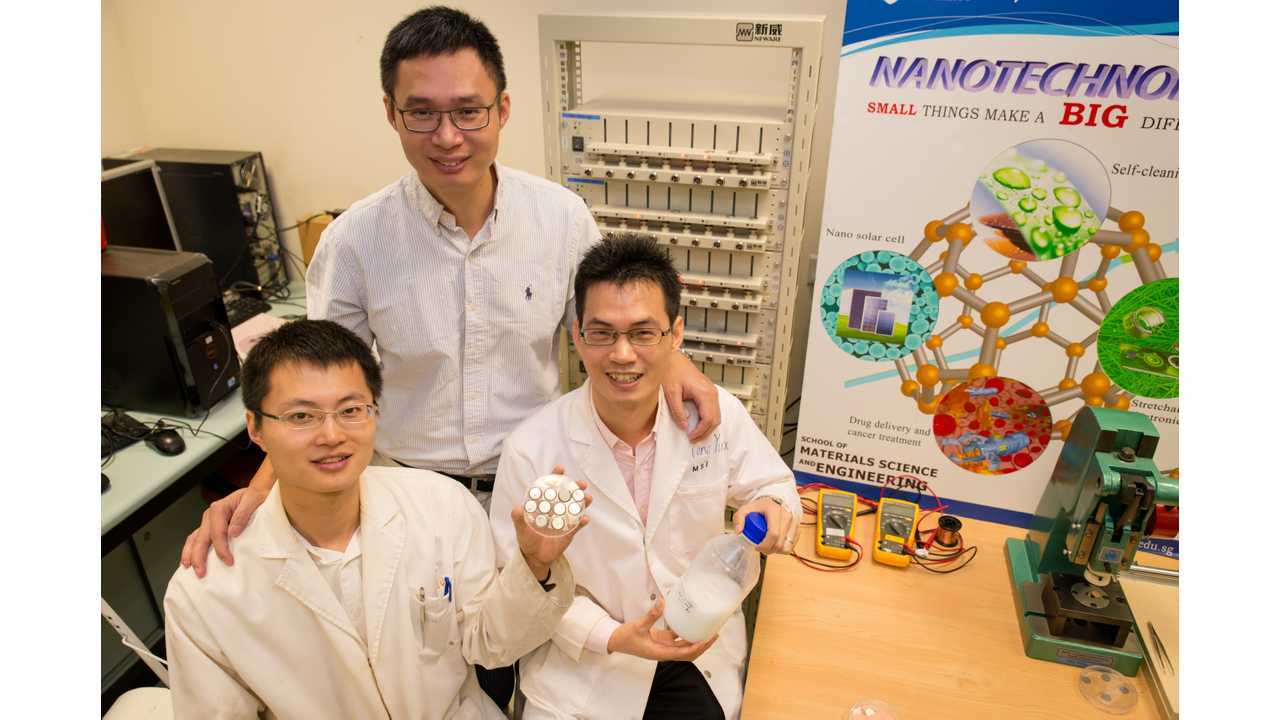 "In the new NTU-developed battery, the traditional graphite used for the anode (negative pole) in lithium-ion batteries is replaced with a new gel material made from titanium dioxide."

The second breakthrough is a long expected lifespan of over 20 years.

According to the NTU team, this could have "a wide-ranging impact on all industries, especially for electric vehicles."

So, let's think about this.

To do the same thing with a Tesla Model S 85 kWh, you must be well above 1 MW of power or maybe even at almost 2 MW.

It sounds like we definitely will need some new standard for that, maybe two additional heavy duty pins on the Combo plugs?

It's hard to believe that we will get something like this anytime soon, however there could be applications for it, at least where currently available lithium-titanate are not up to the task (under 10 minute charging).

There is one question we're left wondering what the answer is. We don't see in the press release any indication of energy density, so what is it?

Here is the full press release:

"Scientists at Nanyang Technology University (NTU) have developed ultra-fast charging batteries that can be recharged up to 70 per cent in only two minutes.

The new generation batteries also have a long lifespan of over 20 years, more than 10 times compared to existing lithium-ion batteries.

This breakthrough has a wide-ranging impact on all industries, especially for electric vehicles, where consumers are put off by the long recharge times and its limited battery life.

With this new technology by NTU, drivers of electric vehicles could save tens of thousands on battery replacement costs and can recharge their cars in just a matter of minutes.

Commonly used in mobile phones, tablets, and in electric vehicles, rechargeable lithium-ion batteries usually last about 500 recharge cycles. This is equivalent to two to three years of typical use, with each cycle taking about two hours for the battery to be fully charged.

In the new NTU-developed battery, the traditional graphite used for the anode (negative pole) in lithium-ion batteries is replaced with a new gel material made from titanium dioxide.

Titanium dioxide is an abundant, cheap and safe material found in soil. It is commonly used as a food additive or in sunscreen lotions to absorb harmful ultraviolet rays.

Naturally found in spherical shape, the NTU team has found a way to transform the titanium dioxide into tiny nanotubes, which is a thousand times thinner than the diameter of a human hair. This speeds up the chemical reactions taking place in the new battery, allowing for superfast charging.

Invented by Associate Professor Chen Xiaodong from NTU’s School of Materials Science and Engineering, the science behind the formation of the new titanium dioxide gel was published in the latest issue of Advanced Materials, a leading international scientific journal in materials science.

Prof Chen and his team will be applying for a Proof-of-Concept grant to build a large-scale battery prototype. With the help of NTUitive, a wholly-owned subsidiary of NTU  set up to support NTU start-ups, the patented technology has already attracted interest from the industry.

The technology is currently being licensed by a company for eventual production. Prof Chen expects that the new generation of fast-charging batteries will hit the market in the next two years. It also has the potential to be a key solution in overcoming longstanding power issues related to electro-mobility.

“Electric cars will be able to increase their range dramatically, with just five minutes of charging, which is on par with the time needed to pump petrol for current cars,” added Prof Chen.

“Equally important, we can now drastically cut down the toxic waste generated by disposed batteries, since our batteries last ten times longer than the current generation of lithium-ion batteries.”

The 10,000-cycle life of the new battery also mean that drivers of electric vehicles would save on the cost of battery replacements, which could cost over US$5,000 each.

According to Frost & Sullivan, a leading growth-consulting firm, the global market of rechargeable lithium-ion batteries is projected to be worth US$23.4 billion in 2016.

Lithium-ion batteries usually use additives to bind the electrodes to the anode, which affects the speed in which electrons and ions can transfer in and out of the batteries.

However, Prof Chen’s new cross-linked titanium dioxide nanotube-based electrodes eliminates the need for these additives and can pack more energy into the same amount of space.

Manufacturing this new nanotube gel is very easy. Titanium dioxide and sodium hydroxide are mixed together and stirred under a certain temperature so battery manufacturers will find it easy to integrate the new gel into their current production processes. Recognised as the next big thing by co-inventor of today’s lithium-ion batteries

NTU professor Rachid Yazami, the co-inventor of the lithium-graphite anode 30 years ago that is used in today’s lithium-ion batteries, said Prof Chen’s invention is the next big leap in battery technology.

“While the cost of lithium-ion batteries has been significantly reduced and its performance improved since Sony commercialised it in 1991, the market is fast expanding towards new applications in electric mobility and energy storage,” said Prof Yazami, who is not involved in Prof Chen’s research project.

Last year, Prof Yazami was awarded the prestigious Draper Prize by The National Academy of Engineering for his ground-breaking work in developing the lithium-ion battery with three other scientists.

“However, there is still room for improvement and one such key area is the power density – how much power can be stored in a certain amount of space – which directly relates to the fast charge ability. Ideally, the charge time for batteries in electric vehicles should be less than 15 minutes, which Prof Chen’s nanostructured anode has proven to do so.”

This battery research project took the team of four scientists three years to complete. It is funded by the National Research Foundation (NRF), Prime Minister's Office, Singapore, under its Campus for Research Excellence and Technological Enterprise (CREATE) Programme of Nanomaterials for Energy and Water Management."