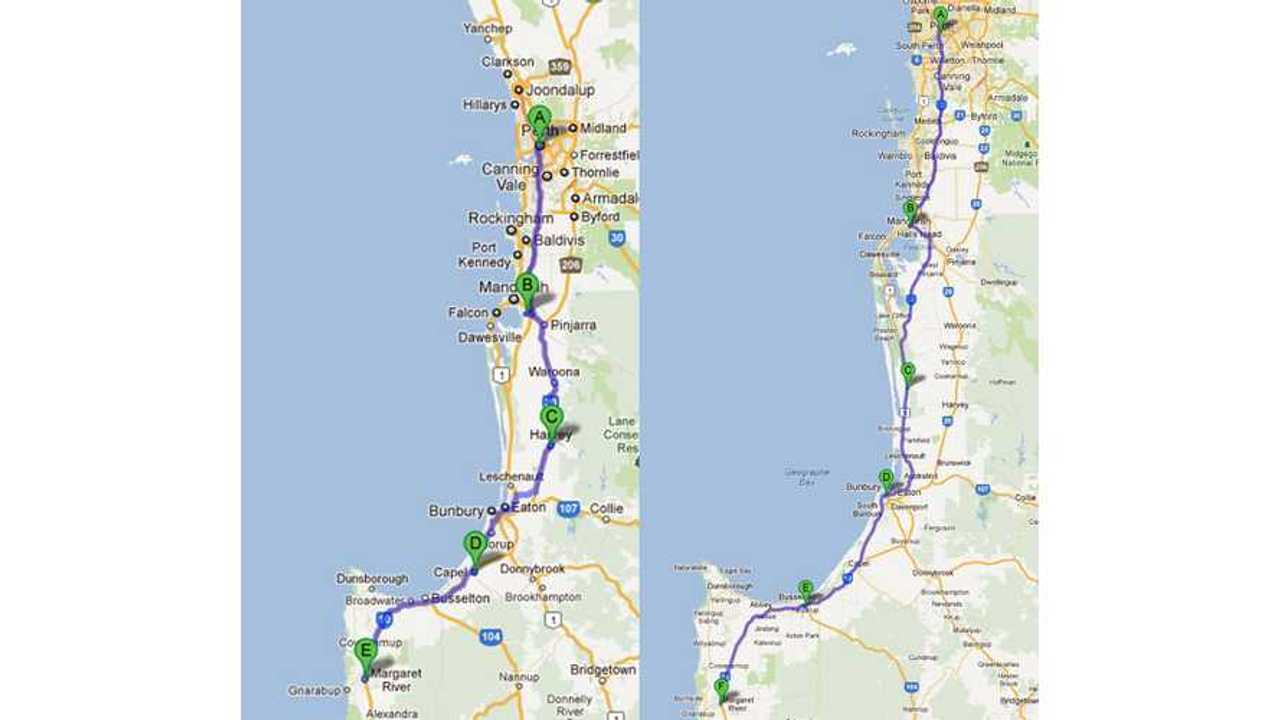 Cape to cape in Western Australia

As we reported earlier this year, EV supporters in Australia are pushing to develop a network of EV charging stations, and recent news is that the RAC (The Royal Automobile Club, Australia's version of the AAA in the US) is moving forward with commitments to fund the "Electric Highway".

The idea was first proposed by The University of Western Australia's REV Project as simply a concept, and was embraced and promoted by the Australian Electric Vehicle Association (AEVA). The commitment by the RAC sends an encouraging message, and seems to confirm that the Electric Highway will indeed take shape.

The RAC has been hammering out details with the local governmental Councils, and what we've been able to gather is that the Councils have been told the RAC will fund the installation and operation costs of each station.  The available information is that the deal has not been inked yet, however.

Here's a bit of information about the UWA REV Project:

The UWA Renewable Energy Vehicle Project (REV) hopes to “revolutionize personal transport” by building zero emission vehicles, powered by electricity from renewable sources, charged from any plug point and viable to both the performance and commercial markets. REV is tackling the problems created by rising fuel prices and vehicle pollution head-on. The REV team is comprises Engineering staff and students from the University of Western Australia, fueled by a passion for a sustainable future. REV provides a unique opportunity for students to learn and develop multi-disciplinary teamwork plus innovative, design, leadership, management, marketing, finance and practical skills.

While folks in California and other areas that are EV friendly may find this news somewhat mundane, it represents a whole lot of work in the less-than-EV-friendly world of Australia.  We were able to get in touch with Chris Jones, the Vice President of the Australian Electric Vehicle Association for some more information.  A lot more information:

Perth seems to be the EV capital of Australia.  Not because of numbers, but on a per capita basis we seem to have more electric cars, scooters, motorbikes and e-bikes than the other parts of the country.  Our AEVA chapter over here has about 90 financial members - Sydney has less than 70.

In about 2002 or so, Thundersky cells came onto the scene, and Rod Dilkes (now running EV Power) put them in his Suzuki Mightyboy.  This was possibly the fist lithium EV in Australia.  At the time there was talk of this Tesla mob and the rest was history.  By the end of the decade, another professor at UWA, Thomas Braunl had won a grant to build a half dozen converted electric cars, install L2 charging stations around Perth, and monitor how people go driving around for a few years.

Thomas' efforts to get a DC fast charger anywhere in WA were to no avail, so that's where it ended.  A couple of years later, an AEVA member called Patti McBain who bought a used conversion (one of the EV Trial Focuses) wanted to push again for a series of fast chargers, from Fremantle (our port city) to Margaret River in the beautiful southwest.  She teamed up with Mel Bainbridge from the Fremantle local government and started to canvass for an Electric Highway.  I drafted the first Electric Highway Vision document, which after several revisions, was effectively a blueprint for the roll-out of an entire fast charging network.  We knew it could be done for under $2 million; chicken feed compared to the $800 million roads budget for the state.

The concept of recharging stations has been around for a long time, but this was the first time a 'community infrastructure' approach had been taken, and it worked.  Mel Bainbridge set up a meeting with the Royal Automobile Club of WA and they decided the time was right to do something bold, like build an Electric Highway to Augusta and Margaret River.  The focus was on getting local governments to manage the chargers and upkeep, while the RAC paid for the units and their installation.  All up, there will be 8 or 9 DC fast chargers, ChaDeMo and SAE Type-1 Combo compatible.  Additional 7 kW level 2 AC chargers will be included to satisfy converted cars.

DC fast chargers exist elsewhere in Australia, but none form a route from one place to another.  Best of all, we won't have the Apple Mac of the EV world (the Tesla S) dominating our EV infrastructure over here.  It's ours to develop, and turn into something unique.

So yeah, we're all pretty proud of getting this far, but there's a lot of work yet to be done.  Should be ready in time for the AEVA AGM in 2015!