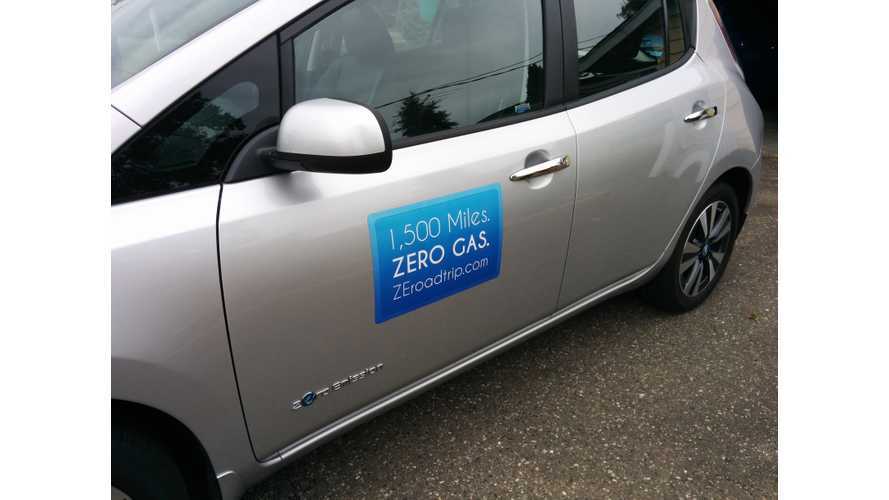 Our Recorded Route From Saturday

Tomorrow, September 1st, 2014, we start our 1,500-mile road trip in our 100% electric Nissan LEAF from Canada to California. We encourage everyone to Like us on Facebook, Follow @ZEroadtrip on Twitter, and especially watch our live map at ZEroadtrip.com.

On Saturday we did a quick drive from the Canadian border to Bellingham, WA, where we live, so that on Monday we can just start off from home and head south, and also to test that the live map was working properly. This drive was 17 miles and used 3.9 kWh of electricity. Unfortunately the road that lets you get to the border crossing easily when you don’t intend to cross the border, has been “closed to thru traffic”, so we weren’t able to actually get to the border crossing. Instead we started out on Boundary Road, which is separated only by a shallow ditch from 0 Avenue, on the Canadian side of the border.

*Editor's Note: This post appears on Tyrel's blog.  Check it out here.

Here’s the tentative plan for Monday. Keep an eye on our live data, and Twitter or Facebook, as the plan is likely to change depending on lineups at chargers and such.

Hopefully we can leave home around 8am. We’ll be charging in Burlington around 9am, and at Magic Nissan of Everett around 10am. At Magic Nissan we’ll try to have a bit of a “launch party” for our trip, so anyone in the area is encouraged to show up and hang out with us before we head south.

After Magic Nissan, we’ll charge at Whole Foods in Seattle, probably around 11:30am or noon. We’ve been invited to then charge at Bill Korum’s Puyallup Nissan, which will probably happen around 1pm.

After that, we’ll be charging at the West Coast Electric Highway chargers in Tumwater and Centralia, before arriving at our campsite at Seaquest State Park, near Castle Rock. We may also charge using the charger at Castle Rock, depending on how hot our battery pack is getting. If it’s too hot we might wait until Tuesday morning to charge, or use a trickle charger at our campsite. Along the way we may stop to see the Mima Mounds National Area Preserve if the weather is cool (as we’ll have to leave the dog in the car).