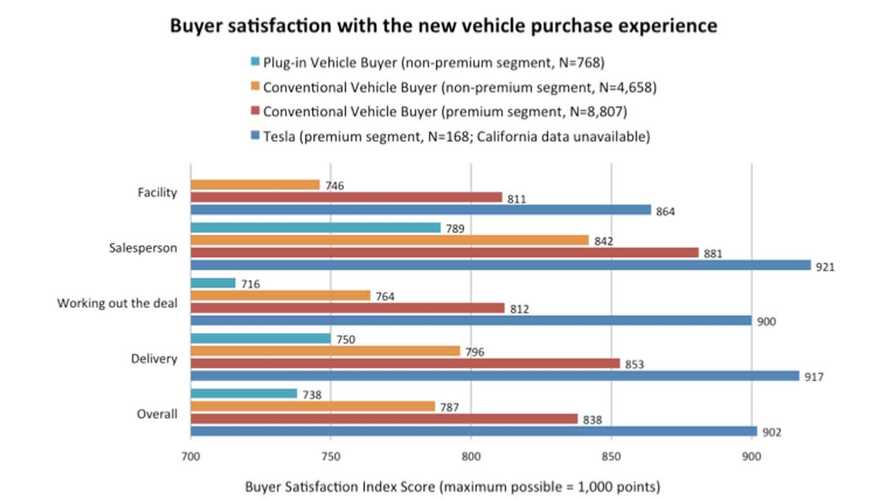 A recent study conducted by researchers at the Institute of Transportation Studies, UC Davis suggests that "buyers of plug-in vehicles (PEVs) are substantially less satisfied with the dealer purchase experience than buyers of conventional vehicles—with the notable exception of Tesla buyers. A fundamental problem appears to be divergent expectations regarding the level of support buyers receive from dealerships," according to Green Car Congress.

As the UC Davis study states:

"Presently, 19 different models of PEVs from 10 different manufacturers are available for purchase in California, but only three of these models are available nationally. Although automakers have made PEVs available for purchase by private consumers in California since late 2010, only a minority of dealers in core PEV markets currently offer them. Further, the quality of the purchase experience has come under scrutiny. An April 2014 Consumer Reports investigation, in which it dispatched 19 mystery shoppers to 85 dealers across four states, found many dealers knew little about the PEVs they sold. In some cases, dealers outright discouraged PEV purchases. In a number of states, dealer groups have moved to block start-up EV automaker Tesla from introducing its direct-to-consumer retail model. Limited engagement by dealers, poor purchase experience, or efforts to block innovations in the automotive retail sector could adversely impact sales and slow the growth of the nascent PEV market."

"Policies and incentive programs do not currently account for the key role dealers play in new vehicle transactions. There is also little available information that describes the extent to which new car dealers are embracing PEVs or that examine the quality of the purchase experience witnessed by PEV buyers. Data is needed to compare the purchase experience for plug-in and conventional vehicle buyers and consider whether differences may impact PEV adoption."

As for Tesla, the study concludes:

"We found that on average, plug-in vehicle buyers rated dealers much lower in sales satisfaction than conventional vehicle buyers. In contrast, buyers ranked Tesla much more favorably. The magnitude of these disparities is extraordinary by industry standards and indicate the problem is likely systemic. … Tesla’s industry-high marks suggest new retail approaches could lift satisfaction scores, engendering positive word of mouth that could hasten consumer adoption."

It seems direct sales are the way to go when it comes to plug-in vehicles.

Some details on how the study was conducted, via Green Car Congress:

"In the working paper, they present preliminary findings from a study of the retail market for PEVs in which they conducted 43 interviews with six automakers and 20 new car dealers in California’s major metro markets for PEVs. They also analyzed national and state-level J.D. Power 2013 Sales Satisfaction Index (SSI) study data on customer satisfaction with new car dealerships and Tesla stores."

"The SSI study captures 12 different PEV models from eight vehicle manufacturers, including GM (Chevrolet Volt); Nissan (LEAF); Tesla (Model S); Ford (Focus EV, C-Max Energi and Fusion Energi); Honda (Fit EV and Accord PHEV); Toyota (Prius Plug-in and RAV4 EV); Mitsubishi (i-MiEV); and Daimler (Smart Fortwo ED). It did not include CODA and Fisker nor models introduced after the survey period such as the Chevy Spark; Fiat 500e; BMW i3 and i8, or the Cadillac ELR. While Tesla Motors was 23 part of the study, California data was unavailable since Tesla opted out of providing data in the state of California."

"The ITS team also examined exploratory data from survey questions co-developed with the Center for Sustainable 28 Energy (CSE) and incorporated in the PEV Demographic and Diffusion questionnaire disseminated to PEV purchase rebate applicants."

This finding truly caught our attention:

"Plug-in vehicles returned higher gross profits but place greater demands on dealers and salespeople, including the provision of support services beyond traditional offerings."

And this is intriguing too:

"For plug-in vehicle buyers, total transaction times at dealerships average 251 minutes (4 hours and 11 minutes), slightly less than the average for conventional car buyers at 255 minutes (4 hours and 15 minutes). In contrast, Tesla buyers on average spent half as long (at just over two hours) interacting with retail representatives."

Basically, the whole study seems to be easily summed up like this...Tesla does it right!