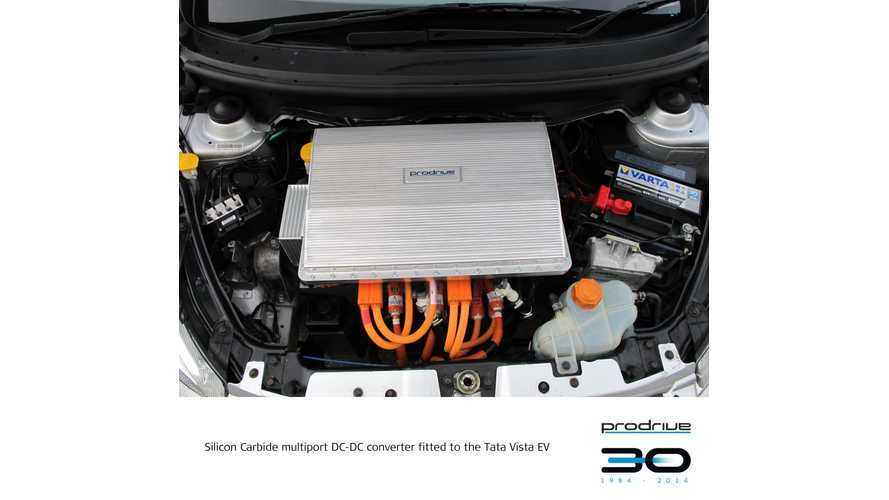 Prodrive, leader of a consortium of British companies including The University of Manchester, Tata Motors European Technical Centre, IST Power Products, Raytheon Systems and SCISYS, and backed by the Technology Strategy Board, announced an interesting milestone.

"The DC-DC converter acts as a hub that transfers energy between key components of the vehicle’s high voltage electrical system.  It has four ports: two connect to the traction motor and high voltage battery; a third connects to a secondary energy source, which in this test car is a super capacitor bank; and the fourth powers the vehicle’s 12V systems. The converter is able to match the voltages of these components and transfer energy between them in response to CAN commands from an external supervisory controller."

"The test vehicle is a Tata Vista EV demonstrator vehicle, developed by the Tata Motors European Technical Centre in Warwick, which has a 220 V battery and 37 kW traction motor.  The vehicle also has two 200 kJ super capacitor banks, which operate at 75-150 V."

A key aspect to achieve higher efficiency is the use of silicon carbide devices, which operates at much higher frequency than equivalent silicon components (75 kHz in this project) with a significant reduction in switching losses. The second gain is much higher temperature operation than conventional silicon modules.

“In normal driving, the converter boosts the battery voltage to around 400 V to optimise motor performance and can supplement the battery supply with additional energy from the super-cap banks when the driving situation demands it. During re-generation, the converter transfers energy from the motor to the battery or super-capacitor banks as requested by the supervisory controller. Energy can also be transferred directly between the battery and super capacitor ports.  The system can be configured to support other energy sources, such as fuel cells or could supply multiple traction motors.”

The second project in this area will lead to increasing the converter operating voltage to 750 V, further increasing power density and demonstrating operation at increased coolant temperatures.

“For this project we have developed a rolling test bed based on a light commercial vehicle chassis, which has a 75 kW traction motor.  The energy storage consists of a 320 V Li-ion battery and two super capacitor banks, all of which were built by Prodrive specifically for this project.”