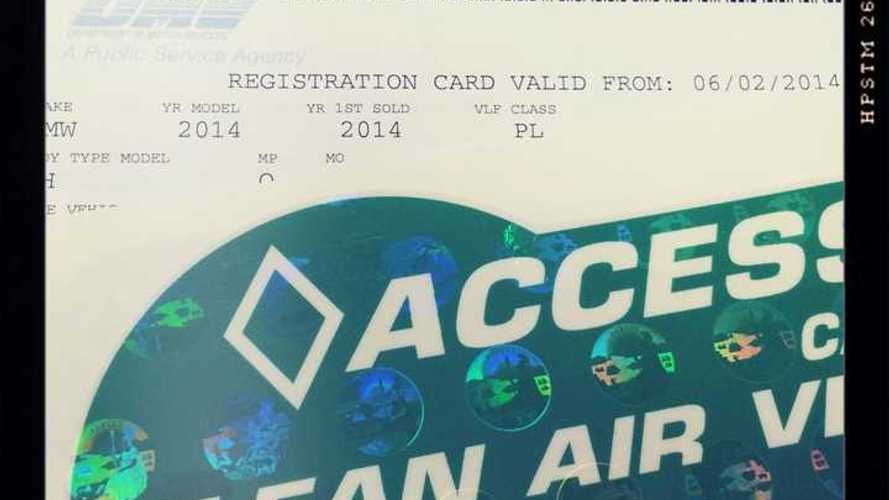 As we reported some three weeks ago, California legislature has recently extended the allocation of green HOV stickers from 40,000 to 55,000. This was accomplished via an emergency measure in trailer bill SB-853, which was passed along with the new 2014-15 state budget, and came into effect on July 1.

Following this encouraging news, first newly issued green HOV decals are arriving in mailboxes across California. Jackson Kuo was one of the first lucky plug-in hybrid owners to receive the coveted carpool-lane stickers. As Jackson reports in the BMW i3 Facebook group,  he sent his application to the DMV on or about June 23, and the stickers arrived in his mailbox on July 8. According to Jackson, he included cash in lieu of a check to cover the $8 fee, and he believes that this might have accelerated the processing of his application.

Scott Lyons, a BMW i3 REx owner in Southern California, said that he sent his HOV decal application on June 26, and the California DMV cashed his check on July 10. Alexander Kuscher, who recently took delivery of an i3 REx in Northern California, reports a similar timeline. Given these reports, recent plug-in hybrid buyers and lessees might want to mail in their HOV decal application soon to take advantage of the swift processing times.

The California Air Resources Board maintains a webpage with a detailed overview of the program. This includes a long list of eligible vehicles, as well as links to frequently asked questions, the application form with detailed instructions, and other resources.

In summary, the green HOV stickers are being issued, but you should act fast to ensure you'll get one before green goes goodbye again.