BMW i3 Repair Process In Detail 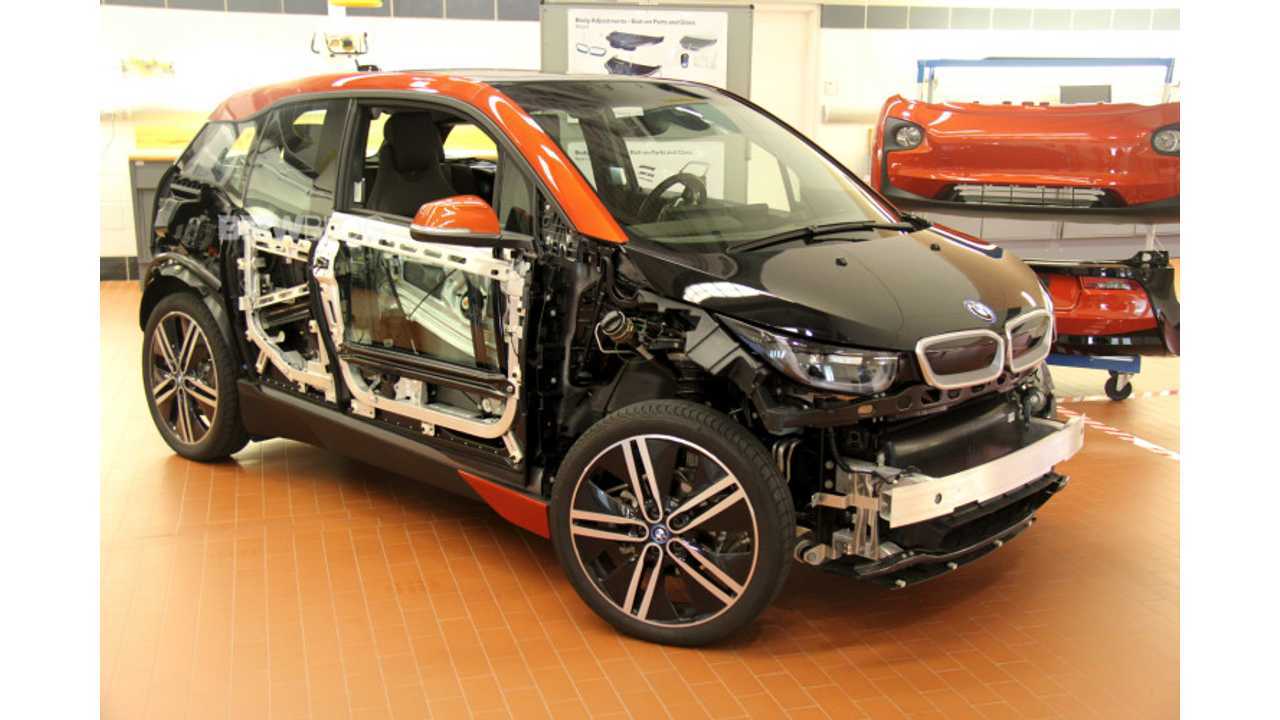 The BMW i3 is truly a revolutionary new car. Revolutionary, however, is not exactly what the repair shop wants to hear when it comes to fixing a totally new car.

Never before has any manufacturer made such extensive use of carbon fiber in a mass produced car. One of the main benefits of the Carbon Fiber Reinforced Plastic used in the BMW i3′s Life Module passenger compartment is that it weighs about 50 percent less than traditional steel and also about 30 percent less than aluminum. The Drive Module houses a 22 kWh battery, the chassis and the 170 hp electric motor.

Therefore, the new lightweight materials used in the i3 comes with totally new repair processes.

*Editor's Note:  This post appears on BMWBLOG.  Check it out here.

BMWBLOG had the opportunity to tour the BMW North America Training facility where technicians for U.S. dealerships come to learn how to repair the very unique lightweight i3. Most consumers won’t really care about the details of how the i3 is repaired but one thing they will care about is what the BMW i3 costs to insure. The more complex and expensive the repair, the higher the insurance premium. A more complicated and challenging service and repair process directly leads to higher ownership costs which will ultimately impact sales.

Fortunately, BMW states that the cost of repairs for the BMW i3 are similar to a BMW 1 Series. This is intriguing given that once a carbon fiber piece is broken, there just is no repairing of it. The entire part/body panel must be replaced. Nonetheless BMW knew the implication of building a car of CFRP and thus designed specific cut away sections in the i3. These are defined segments that when cut will allow the technician to remove the damaged CFRP piece and then bond the new CFRP segment back in with glue.

THE DRIVE AND LIFE MODULES

BMW constructed the i3 in two segments, the Drive Module and the Life Module. The Drive Module contains the electric motor, suspension, lithium ion battery and is the backbone of the car. This module is made mostly of aluminum and its repair process is very similar to other aluminum chassis components that BMW has been producing and repairing for years.

The Life Module is the occupant cabin and its backbone is made of Carbon Fiber Reinforced Plastic. This frame and roof are all CFRP where as attached to the sides of the i3 are composite plastic panels. These panels are designed to absorb what would normally dent a metal car and pop back into shape. Added bonus: your i3 isn’t’ gonna rust.

Aluminum: BMW states that standard “Cold” repair methods for the aluminum components will be used in repair. These include bonding and riveting. These methods have been used by BMW workshops since 2003.

Panels: BMW designed the panels to be replaced via standard screw/clip on plastic plated parts, so not much different really than a standard car.

Glass: The CFRP body which is surrounding and holding the glass can be damaged by a standard glass removal tool, so there is a special tool required here. Overall the mechanism of removing and replacing is similar. Standard glass removal tool uses a strong metal wire that would damage the carbon fiber, so BMW’s tool has something like a super strong fishing line.

Carbon Fiber Body: This is where repair techniques change significantly from standard cars. There is no pounding out damaged CFRP. In order to repair the i3, the damaged section will need to be cut out at one of the predefined points. These are located at the top of the A, B, C pillars as well as forward and aft of the floor pan.

BMW requires a specialized cutting device that looks part bone saw on the business end and part Dr Who Villain, a Dalek, to vacuum up the carbon fiber particles. Once the carbon fiber body has dis-articulated at the very specific points, the technician then places the new section on and bonds/glues it back together.

This is where my favorite part of the tour came. “This isn’t very complicated but it needs to be very precise,” says a BMW technician. He further added that the time it will take to repair i3 electric vehicles will actually be less than standard cars and thus decreased labor costs with auto repair.

BMWBLOG is happy to report that the insurance cost for the BMW i3 is similar to a 1 Series Coupe. Adding a BMW i3 to my automobile insurance policy will only raise the monthly payment by $42. Take that with a grain of salt as car insurance policies range all over the place depending on driving history, use and location.

The BMW i3 has a 22kWh battery powering a 170 hp electric motor good for an 80 mile range. It has been tested as the most efficient electric car available on the market due to its low weight with extensive use of Carbon Fiber Reinforced Plastic: 124 MPGe. The Range Extended version has a small generator in it which never directly drives the vehicle’s wheels but rather charges the battery while adding roughly 330 lbs to the vehicle curb weight.

Check out BMWBLOG for more BMW i3 repair images.