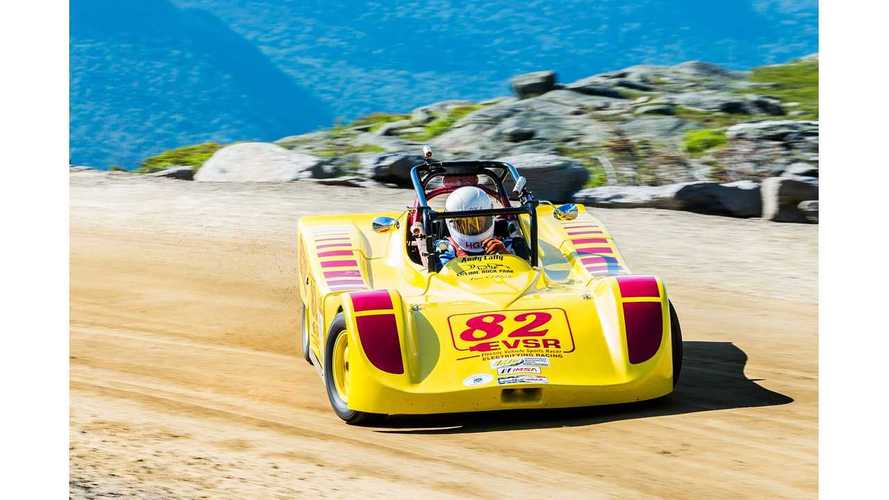 In late June, at the Subaru-sponsored Mt. Washington Hillclimb in New Hampshire, an electric racer took part in the event for the first time (and it wasn't the Subaru Stella EV).

For comparison, the fastest Subaru was able to reach the finish line in a new record time of 6 minutes and 9 seconds.

EVSR itself is the electric version of Entropy Racing's Entropy Sports Racer. It seems that this year two of them were built and are used on various occasions.

"EVSR may not have beat all of the 400+ horsepower 4wheel drive monsters but with our quiet little 150 horsepower car and the help of Tim O’Neil we have made history as the first and fastest Electric Racing Car to compete in the Climb to the Clouds."

Sadly, we don't see full specs on the vehicle on the website.  However, there is probably an AC drivetrain and LiFePO4 battery cells from CALB. Full story from the milestone even from EVSR can be found below.

The team behind the project would like to build many such racers and host a new series with them.

"The end goal of EVSR is to build an entire fleet of electric sports racing cars, and host a series. Once a series of EVSRs are built, they will be fully rentable. Custom cars will also be available to purchase."

Thursday morning was clear and beautiful and we got to the paddock at the bottom of the Auto Road and began to set up camp. We promptly met with Tim O’Neil, 5 time US rally champion and 1990 Mount Washington record holder who just as promptly jumped in Fritz and started doing donuts in the sand parking lot with a big grin on his face. Thursday was a setup day but the Auto Road was open and Tim took the opportunity to drive EVSR # 82 up the mountain to get familiar with the controls and the hill at sedate speeds.

Friday Morning was another story altogether. As we always do, Charlie Greenhaus, EVSR project manager, instructed the flaggers, workers and management on the safe handling of the EVSR and it was decided that Tim would be the first car up the mountain after the 10 vintage cars to familiarize the workers with the different sounds and sensations of the first fully electric car to compete in the event’s 110 year history. From the first run to the last on Sunday Tim and EVSR made motorsports history. Friday offered 2 practices for the bottom half of the mountain which clearly exceeded anyone’s expectations in terms of performance or results. The first run was 6th fastest of ALL cars up the mountain and marked the first time Tim had driven an open cockpit car, a mid-motored car, or a road racing car. His comment regarding the difficulty of judging speed without motor noise or shifting was to say that he knew he was going too fast when the course workers were jumping into the trees when he approached. Run two on Friday was a little more conservative with a 14th overall while O’Neil learned to manage the car and get a feel for the additional grip and the stiffer suspension that is very much unlike the rally cars he is accustomed to.

Day 2 On Saturday saw sunny bright skies with a clear view to the top. At 8AM all cars drove to the mid-point of the mountain to do two practice runs from there to the top. Once again Tim showed the speed he is known for and piloting EVSR he posted an 8th fastest on the first run and 9th fastest on the second run.

Sunday is the only day that really matters and you get two runs to prove it. Since our times were fast and the field is inverted we were one of the last cars to do our runs which meant a lot of waiting. At 11:00 AM Tim quietly rolled up to the starting line behind a lightning fast Sunbeam Tiger and waited for his turn to launch. The light turned green and the spectators’ first reaction was a slight snicker as EVSR motored silently away but the giggles quickly gave way to “Wow” and “that thing moves” and “Holy S***” as EVSR gathered speed and flew out of sight and up the mountain. While the team was confident, we were still nervous since this 7 ½ mile hill is challenging and with over 1 mile of gravel it certainly was not what we designed the car for. A few minutes later we heard that Tim had successfully made it to the top and in another few minutes we were rewarded with a time of 7minutes and 30.78 seconds. This time put us 16th overall and is a personal best for Tim and beats his 1990 overall hill record by a solid 14 seconds. Preparing for the second run was a matter of plugging in the car and raising the rear ride height by 1/2” to deal with some of the frost heaves on the pavement and the gravel portion of the road. We talked about the drive and Tim was confident there was more time in the car but had concerns about the stiff suspension in the upper portion of the road. Still we felt he could be in the mid to low 20s if everything went well. Hurry up and wait turned into a very long wait when a driver had a minor brush with the rocks within sight of the starting line making a big mess that required cleanup and a tow. Meanwhile Tim was baking in the car and we were biding out time.

The last run of the day for us was just icing on an already perfect cake. EVSR had taken on the mountain and all that was left to do was to make one more trip up the hill. Everyone was excited and cheering for a good finish and Tim did not disappoint. He put on a great show for the spectators and despite losing a cooling fan half way up the mountain and ultimately losing power due to a de-rating of the motor in the last mile, he still posted a 7 Minute 28.92 second time. Special thanks go to the entire EVSR team, Rally America, Subaru of America, the New Hampshire Sports Car Club and special thanks to the staff of the Mount Washington Auto Road for making us such welcome guests and for sharing this opportunity to make history on mount Washington.

EVSR may not have beat all of the 400+ horsepower 4wheel drive monsters but with our quiet little 150 horsepower car and the help of Tim O’Neil we have made history as the first and fastest Electric Racing Car to compete in the Climb to the Clouds.