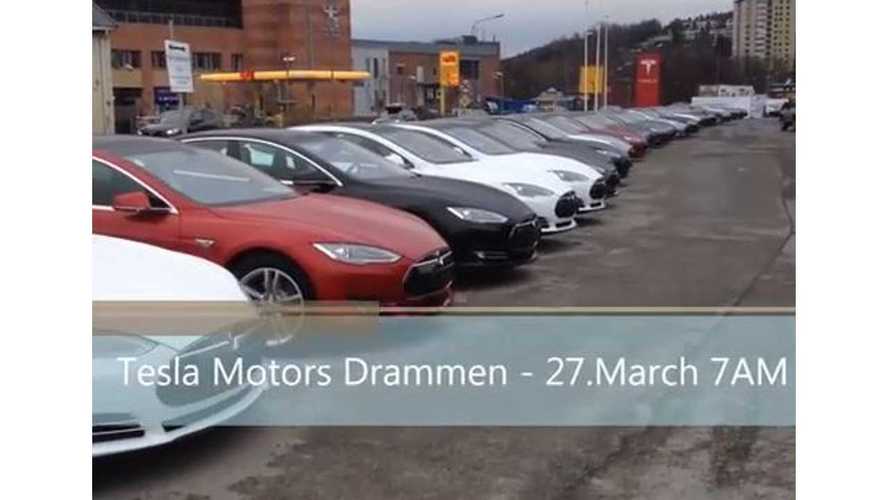 If it's even remotely plug-in sales related, you can bet InsideEVs is on it.

This time we venture to Norway where we discover that Tesla Model S sales remain strong there, despite being on the Norwegain market now for 12 months.

"According to OFV, Norway’s automotive industry association, the California electric car manufacturer has sold an average of 436 Tesla Model S sedans a month for the past year, up from about 357 units a month last November."

According to International Business Times, Model S sales in Norway have lot s of up s and downs:

International Business Times claims that this up and down sales for the Model S can be directly tied to supply constraint:

"All Tesla cars are manufactured at the company’s Fremont, California, factory. Kits are then sent to Europe where final assembly takes place at Tesla’s Tilburg, Netherlands, facility. So while Tesla is busy filling orders in the U.S. and sending cars to Asia, it seems cars are being sent in batches to fill Norwegian orders."

Why's the Model S so hot in Norway?  The answer is simple:

"Because the Model S is electric, Tesla can take advantage of a Norwegian tax regime that makes the Model S the least expensive luxury sedan in the market. At half the total price of comparable luxury cars like the Porsche Panamera S or the Audi S6, a Model S bought in Norway is a bargain."

Our own tallies for Norway and the Model S has 3,431 deliveries so far this year.  It does seem like the IBT's conclusion that the all-electric Tesla is sent "in batches" is correct as just 297 cars have been reported delivered in August (183) and July (114).