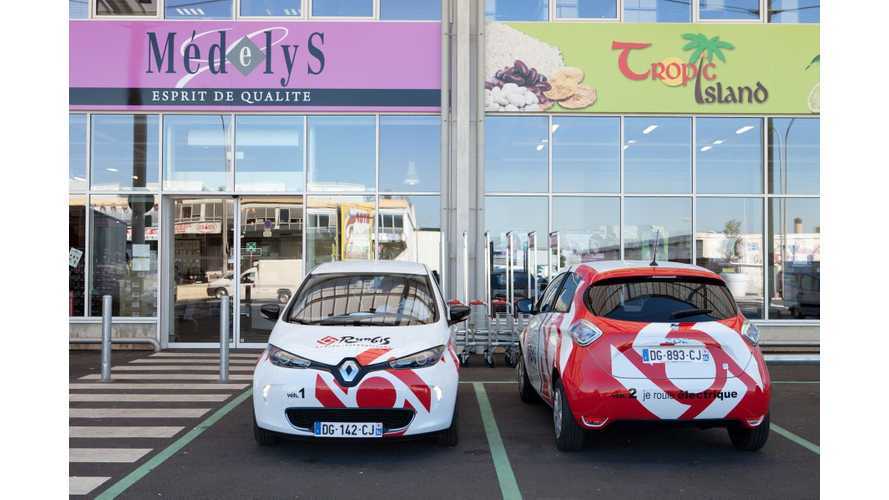 French company SEMMARIS, founded in 1965 which manages the Rungis International Market (a 234 hectare ecosystem on the southern outskirts of Paris that supplies food to the French), inaugurated its new fleet of electric cars.

Seven Renault ZOE will not only serve the employees, but also will raise awareness towards electric cars among the 1,200 companies operating at the market and 25,000 customers.

The initiative doesn't ends there as infrastructure and car-sharing systems are on the way:

"Concurrently, beginning in 2014 and in cooperation with the City of Paris, slow and rapid charging stations will be installed, allowing market users to work and move about in electric vehicles. A car-sharing system with online booking will be available for short-distance use across the site’s 234 hectares, and in 2015, SEMMARIS will offer buyers combined packages with a ‘small cold-storage unit + parking place for LCV with electric socket."

"Renault Group is also offering Rungis buyers the first KANGOO Z.E. cars equipped with a cooling unit running on an auxiliary battery, independent from the engine."

“An electric vehicle for our fleet was the obvious choice because of its ecological and sustainable qualities, in phase with our goal of making Rungis International Market an innovative and exemplary ecosystem. Using clean vehicles, diminishing the market’s energy footprint and promoting flow pooling to decongest urban areas are concrete ways of achieving this goal.”

“We are pleased to support SEMMARIS in its efforts to reduce its carbon footprint. Renault firmly believes that electric vehicles offer a real solution to current problems relating to the environment and to noise pollution in urban areas.”