Navigant: Penetration Of BEVs And PHEVs In Medium- And Heavy-Duty Truck Segments Will Stay Low By 2035 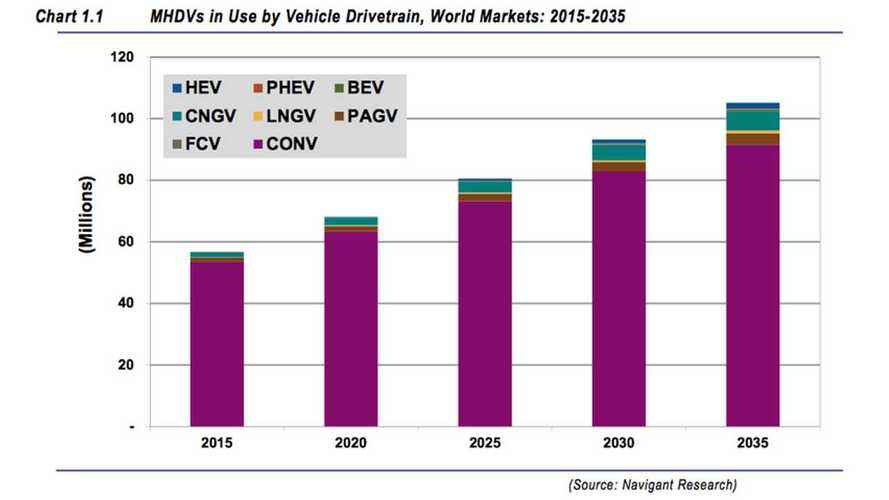 Navigant Research recently released a report title "Transportation Forecast: Medium and Heavy Duty Vehicles" in which it indicates that electrification of trucks will be rather slow.

According to data, the number of medium- and heavy-duty vehicles (MHDVs) in use worldwide will nearly double between now and 2035. Alternative fuel vehicles (AFVs) will grow even two times faster as their market share will increase from 5.0% to 11.2% by 2035, but most of them are propane autogas and natural gas vehicles.

Despite this growth, all-electric, plug-in hybrid or fuel cell trucks will have less then 1% market share by 2035.

The only positive thing about this is that in 2035, EV sales probably will be much higher than 1% of market share. In Norway, we observe over 1% electric cars in use with over 10% market share in sales.

Anyways, we don't know the future but 1% in 20 years is rather a pessimistic view for EV enthusiasts and as true believers, and as such we can't agree with this prediction. If Navigant Research is right, diesel will be the king for at least one more generation.

"The total number of MHDVs in use worldwide will nearly double between 2014 and 2035, according to the report.  Unlike light duty vehicles, most of today’s MHDVs are fueled by diesel fuel.  While diesel will remain the primary fuel choice of MHDVs throughout the forecast period, the percentage of MHDVs powered by diesel is expected to fall from more than 79 percent in 2014 to 76 percent in 2035."