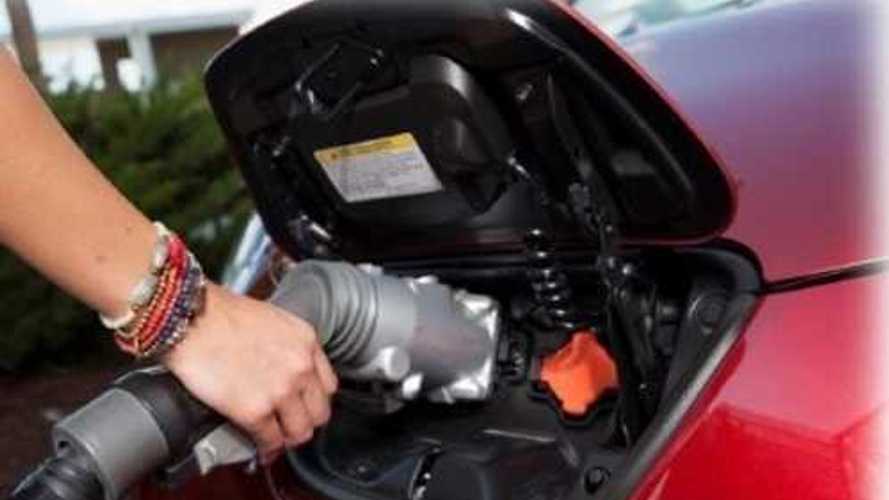 This past April Nissan announced an innovative "No Charge To Charge" program that would be available with every new LEAF purchase in the United States, in conjunction with a new EZ Charge one-card-for-all network.

We can now announce that effective yesterday, that program is now live.  And while it is not yet available everywhere, it is online today in 10 major city areas.

Past these initial 10 cities, at least 15 more will be included over the next year.

How the program works is fairly simple.  For the first 2 years after a new LEAF purchase, you can get either a free 30-minute DC CHAdeMO fast charge, or a one hour L2 charge at participating networks and stations throughout the US.

The program works inside the "EZ-Charge" program that is administered by NRG eVgo.  You can learn more about the program, or check out which stations closest to you are enrolled in the free charging scheme by checking out EZ-Charge.com.

The initial 4 charging groups (or five if you like to separate Blink from the rest of the CarCharging family) that are part of the EZ-Charge program are:

It is worth noting that ChargePoint is NOT part of the separate "No Charge To Charge" program, but the company tells InsideEVs that about 60% of their stations are already free.

Currently, EZ-Charge cards are only available through participating Nissan dealers in the specific announced markets.

We had a chance to talk with Brendan Jones, director of EV Sales and Infrastructure at Nissan about the program earlier this week to follow up on some of the finer details.

We asked Mr. Jones about Chargepoint returning to the EZ-Charge program after backing out in mid-May because of proprietary customer information being shared with all the players, and being lead by eVGO.

At the time ChargePoint CEO Pasquale Romano said upon exiting the program that “...they (NRG eVgo) want to monopolize the relationship with the driver, I think this is their attempt to gain some relevance in the market.”

Mr. Jones said that the program had not been without its challenges getting to the point it is today, but that everyone came together in the spirit of having one unifying access card.

We have to note that the new language on the program does state that "...EZ-Charge will transfer your basic personal information to your selected charging networks."

The EZ-Charge card program will still be active after the 2-year free "No Charge to Charge" period has expired, and it is believed more OEMs will also be offering programs similar to Nissan at some point in the future under the one-card solution - a cooperation that Mr. Jones emphasized was needed in the industry, and encouraged by Nissan.

We couldn't help but ask the Director of EV Sales and Infrastructure how Atlanta could NOT be one of the cities in the "No Charge to Charge" program right out of the gate; and while Mr. Jones said he didn't want to "spoil" the announcement of what the other 15 cities would be for the charging networks, he did say that Atlanta would be up shortly...and why it was not included on the debut list.

"The program has some customer satisfaction stipulations in terms of the number of DC fast charging stations that have to be in the market at launch...we are not going to launch it in the market until the offer (number of stations) is solid.  So we won't have a customer driving off the lot saying 'they gave me this great promotion, but there is no chargers'.

We've got a solid date that is not too far off for launching Atlanta...multiple chargers are going to be going in this month, next month, etc., and we wil be ready to pull the trigger on that, in that market, relatively soon"

On charging and fees past the "Free" time period:

Given this is not an unlimited free charging program, what happens after the free charging time period is up?  Is there the built-in functionality to stop the charge before fees are incurred?  Will customers have to 'nanny' their plugged-in vehicles to avoid paying charges if they go over the time allocation?

In the case of the DC fast charging with the LEAF, the Nissan director said that it would not be an issue as most fast charges take no more than 16 or 17 minutes, but that it could be an issue in some cases with L2 stays (6.6 kW max).

The new EZ-Charge website states that fees range from station to station, and customers will be charged according after the free time allotment expires.

"DC fast charging fees can range from 10 cents per minute to $5 to $10 per session. Level 2 charging fees may range between $0.49 per kilowatt-hour to $1 to $2 per hour. Charging fees are noted at each station."

Mr. Jones noted that some machines and networks have more built in functionality than others and could accommodate customization to avoid fees...but not all; while saying that all the networks and Nissan ultimately want the customer to be satisfied with the program, and that kinks will get smoothed out as they become more accustomed to how the stations are used.

If you do find that you need more charge than the free allotted 1 hour L2 can provide, there is a 60 minute disconnection interval required on both the CarCharging and NRG eVgo charging stations before it can be restarted for free.

In total 2,600 public stations are available today, with more than 200 being of the quick charging variety.