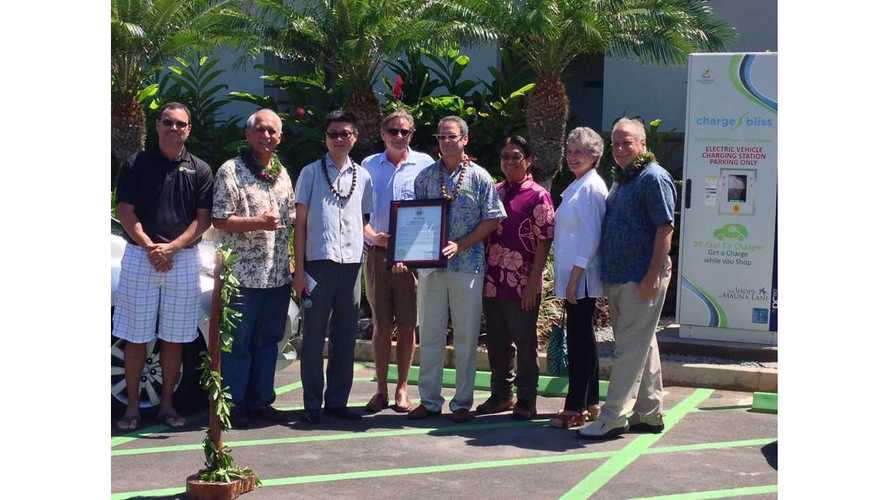 DC Fast chargers are relatively common in quite a few of the "EV friendly" states around this vast country, but the Big Island of Hawaii more resembles Wyoming than Oregon when it comes to population density, technology and culture. Far removed from the vastly populated, cultural center of Honolulu, the Big Island (also known as Hawai'i Island) sits on its own, relatively rural and conventional.

The number of EVs on this island can be measured in the low hundreds, rather than thousands, and even though Hawaii island is a small place, charging stations are nearly 100 miles apart, making island wide travel virtually impossible for most EV owners.

Yes, range anxiety exists here, just ask anyone with a Nissan Leaf if they've ventured more than 40 miles (over the mountain) from home. The answer is NO. Ask a Tesla owner though, and they'll be singing a slightly happier tune, well so long as they have the 85kw Model S. No Superchargers in this neck of the woods either!

The good news, is that as a percentage of population, the Big Island (like the state) is ahead of the rest of the nation. Even though the Big Island represents only 11% of the total population of Hawai'i, we have about 17% of all the EVs in the state. But sad news again as Hawai'i Island only has 9% of the public chargers for the state and many of those chargers are the mostly defunct Blink and Better Place Stations.

But all is not lost; a core of EV enthusiasts exists and is working hard to take the Big Island to the next level.  The Big Island EV Association has struggled since day one to add charging stations, and in particular fast charging stations to finally enable the pure EV owners a way to travel over the mountains to the opposite sides of the island (several 13,000' volcanoes stand in the way of that goal.) Side note: Our island derives about 25% of its needs from a Geothermal Power plant. None of the other Hawaiian islands have a "hot spot", making that option impossible.

Today is a day to celebrate as the Big Island introduces the first DC fast charger (CHAdeMO SAE Combo plugs) here on the island.  Most of the thanks goes to one company for finding a way to make it work in our problematic island economy.

Many of you know that Hawaii is home to the highest energy rates in the country, and so adding a charging station is not the easiest sell. The Big Island has even higher electricity rates than the other islands around it. The going rate for businesses and residents is a ridiculous $.42/kWh and climbing. But it gets worse.  Businesses pay "demand fees" for consuming power too quickly or consuming too much during peak consumption hours.

Charge Bliss is attempting to tackle  the problems of high energy cost and lack of fast chargers with a bundled solution:  By turning businesses into their own smart grid.  Smart grid systems with large scale solar and battery back up allows businesses to create power during the day, store it in batteries and then redeploy it when they need it most.  This enables them to create energy and further reduce their utility bill by  "peak shaving" as CEO Dave Bliss calls it, which can save the companies thousands of dollars in "demand fees" every month.

The idea of smart grid energy management  is relatively new in Hawaii but they are working very hard to educate businesses  that they can save a great deal of money on their utility bill while simultaneously building out the EV infrastructure, creating a full network for the  residents on the Island of Hawaii.

"We hope the installation of a level 3 charger at The Shops at Mauna Lani will be an example for the Island and the first of many around the entire island."   As Dave adds, "Solar energy by itself is a poor solution to our energy demand problem."

Peak production happens in the middle of the day, but energy needs often increase in the early morning hours and the early evening hours when homeowners begin to tax the grid and cause power companies to ramp up production.  By looking at the bigger picture, Charge Bliss hopes to tackle both issues at once – high utility cost and lack of quick charging infrastructure.

I like that Chargebliss dreams big here and I applaud them for thinking creatively and finding a unique solution that suits Hawaii so well. This gives Chargebliss a better argument when the "loss leader" argument fails to convince business owners. As EV owners we are drawn to these chargers and spend extra time shopping while there. This is a good argument to be sure, but it's a hard sell when we're talking about 10k and up pricing for many L2 chargers or one big L3 charger.   Their focus on DC fast chargers also means that more often than not, customers will be paying for their charge while they spend time there. That's good news for both the station owner and for the businesses that surround it. Chargebliss is so excited about this market that they have set a goal of nine chargers for the island, and have a map of 13 as the "ideal number for this island". Dave Bliss indicated to me that they are in "serious negotiations" with at least "six companies that are interested" in taking the leap.

But Chargebliss wasn't the only group there that was pumped up about the industry. The Hawaii delegation also seems excited about our electric future. At least six members of Hawaii's delegation came to the grand opening event at Mauna Lani. State Senator Mike Gabbard was the keynote speaker and offered up his story on reserving his Nissan Leaf in the early days before a single car had hit dealer lots. It's nice to see a Senator putting his money where his mouth is! He joked about filling out the reservation on the website, and was about to hit the "submit" button.. but he had to talk to his wife (get her permission) before going through with it. He had a bright red one all queued up, but his wife wasn't having it. FYI: He ended up with a silver one instead.

Most of the other representatives that attended are Big Island reps., except for U.S. Senator Brian Schatz. Sadly, he was in D.C. that week (and campaigning at home that weekend) so he sent his local representative Robbie Robertson to the event instead.  Robbie was entertaining, as he talked about owning a bulletproof  Toyota Prius, and talked about his hesitance to trading it on a Leaf as he drives all over the island on a regular basis. He, like many other people I talked to mentioned/complained about the lack of chargers in the "area between" the major hubs on the island. The consensus is that with our topography and existing infrastructure, about 40 miles between chargers is necessary.

Kona Nissan brought a Leaf down to the event.

As a resident of Hilo, I've talked to several Hilo Leaf owners who shake their head profusely at the idea of taking their EV's across the island to Kona ( Where Mauna Lani is located.) I urged several owners to try it, as I would be right alongside them in my Volt, but not one person took me up on the offer. I do know one crazy guy who did drive his Leaf up the Saddle, and over the 6,700' pass, but he did so with a 100% charge in his brand new 2013 Leaf... all the way down to 13% SOC at one point. EVentures are fun! At the event, some looked at our Volt in agreement, as we told them we drove over the mountain ( Saddle) to attend the event, while others clearly showed their preference for Japanese brands. Here in Hawaii Asian influences permeate the culture as much as anything.

One final note in regards to our local Deluz Chevrolet dealership and their support for the "EV movement." I invited them to the event but the turned it down due to lack of support in the community.  I talked to two representatives of the dealership and both expressed concerns over price for the Chevrolet Volt and Volt 2.0. For them it is also a battery concern as they see replacement and recycling to be a key issue for them as well.

My comment to them regarding the usable life-cycle of the battery most likely exceeding 15 years was NOT well received. It's obvious that they've had quite a bit of experience in the Toyota dealerships they own with replacing Prius batteries.  They were much more open to the idea of "actually bringing in real inventory when the price of the car starts with a '2'". I agreed with Mr. David Deluz Jr. partially, but countered that the average price of a car these days is around 32k and that is the heart of the market in my opinion.

I think it's also worth mentioning that the much less sophisticated Nissan Leaf is selling in numbers at it's sub 30k price tag and buyers are not grumbling at that price point. Also, the BMW i3 is selling at around 45k with no problem at the moment. The content and implementation are similar to the Volt, but the price is quite a bit higher.

One things for sure, consumers here are seem ready to accept EV's, but our local infrastructure is not there yet. For now, Chargebliss is the only company on the ground here pushing for a complete network and offering to cut energy use as a counter to the addition use.

Now if only we could get another car company to produce an EV for Hawai'i that way we can have some real choice in the market. Currently the Honda Fit nor the Toyota RAV4 EV are sold here, as is true with the Spark and others. The only other EV I've seen here is an i-MiEV or two.

Other press coverage of the event:

Hawaii Tribune-Herald: Paving the way for electric cars on the Big Island