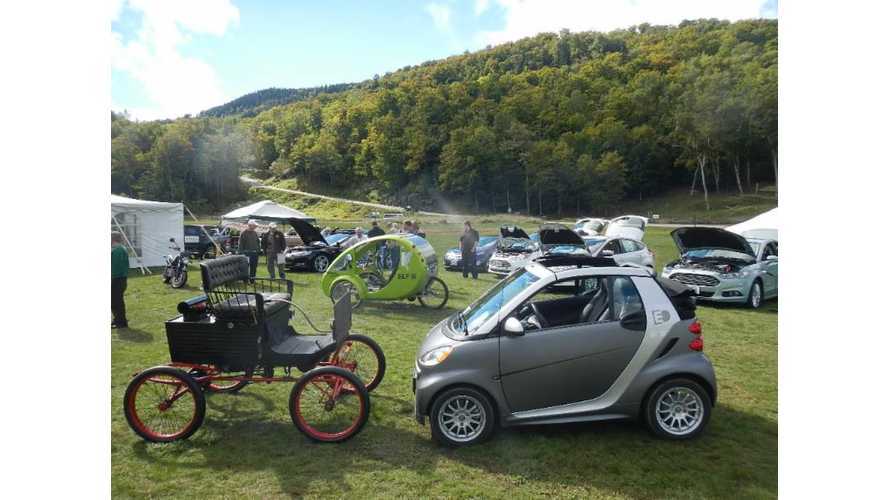 This year marks the first full-week National Drive Electric event from Sept 15 to the 21st - a week-long celebration of what used to be National Plug-In Day organized by the Electric Auto Assn, Plug In America, and the Sierra Club. With over 100 cities hosting events, it has now become a legitimate coast-to-coast week-long EV extravaganza.

On one coast, in Los Angeles, the Huntington Beach "Plug-In to Excitement Day"  promises to be one of the largest, most comprehensive and exciting of the weeks gatherings, with four football fields of exhibit space, a forecast of over 20,000 attendees, speakers, cars to test drive and an assortment of other interesting electric-powered machines: electric bicycles and skateboards to ride, electric surfboard demos and exotics, trucks, motorcycles, boats, and buses. Held on Saturday, Sept 20 from 10AM-4PM, and nestled just on the fringe of the Los Angeles metropolitan area, the organizers are expecting to make the record books with this one.

On the other corner of the continent, practically as far as you can get from the sunny southwest in the continental US, New Englanders are planning an event with a slightly different flavor - a bit of a challenge. Mount Washington, at 6,289' (1,917 m) boasts the highest elevation in New England, the oldest (and steepest) Auto Road in the US, and is continuing it's 40-year tradition of supporting alternative energy vehicles and serving as a proving ground for alternative-fuel vehicles of every description.

Held on the weekend immediately before the official start of NDEW, Sept 13-14, the Mt Washington Auto Road ALT-Energy Summit will be a two-day NDEW "kickoff" event in New England in conjunction with the New England Electric Auto Assn., and promises to be the biggest gathering of electric vehicles in New England's history. A re-launch of an event originally called the Alt Energy Regatta, started in the mid-'70s and held continuously since then, the Summit will host a variety of alternate-energy powered vehicles from Teslas and Leafs and other production cars, to home-built greasecars, electric cars and motorcycles, to interesting inventions like the Black Sparrow 3-wheeled electric skate/snowboard and MIT's "Silly Scooters" to not only show, but prove, the technology on one of the most challenging roads in America.

From the beaches of Southern California to the White Mountains of New Hampshire, National Drive Electric Week is truly going to be an event that sweeps the continent.  Every one of the 100+ cities and regions has their own take on "Drive Electric", and it's a chance to see a glimpse of how EVs are fitting into every community across America.