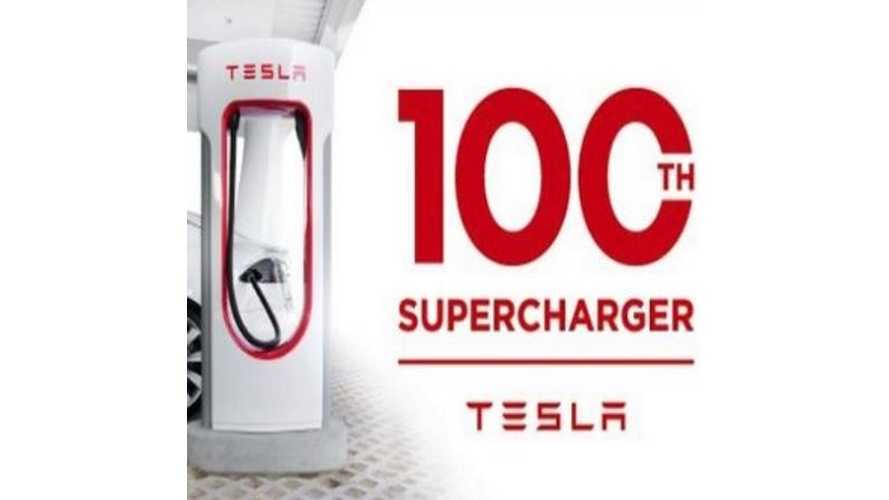 Despite Its Coming Soon Status, This Supercharger Has Been Confirmed To Be Online/Operational...So That's #100 For Tesla In The US.

Tesla Motors is now celebrating the opening of Supercharger #100 in the U.S.A.

Okay, maybe that's not quite true.  We expect Tesla to officially announce the opening of Supercharger #100 in the US sometime soon, but we've got the jump on Tesla this time and can claim that Tesla's 100th US Supercharger, located in Tifton, Georgia is now operational.

That's quite a remarkable achievement for one automaker, especially when one considers that Tesla only began installing US Superchargers in September 2012.

Separately on Friday, Tesla announced that their Supercharging network had delivered more than 1 GWh of energy during just the month of June.  That number translates to roughly 3.7 million all-electric miles and 168,000 gallons of gas saved.

If you recall, Tesla celebrated the opening of it 100th Supercharger worldwide some 3 months ago with much fanfare in Hamilton Township, New Jersey.

Now, there are 100 Superchargers in operation in the U.S.A alone.  Worldwide, the tally for Tesla Superchargers is now at 137.  Our congrats to Tesla for this remarkable charging station achievement.

Editor's note:  It looks like there has been a little 'media wrangling' at Tesla as their Supercharging site was updated (July 12th) to put the 100th Supercharging site for North America in Squamish, British Columbia Canada (still no Tifton (and another  new US location) despite being active for some time)...even though chronologically that appears to be false. But whatever - congrats to Canada on Supercharging station #1