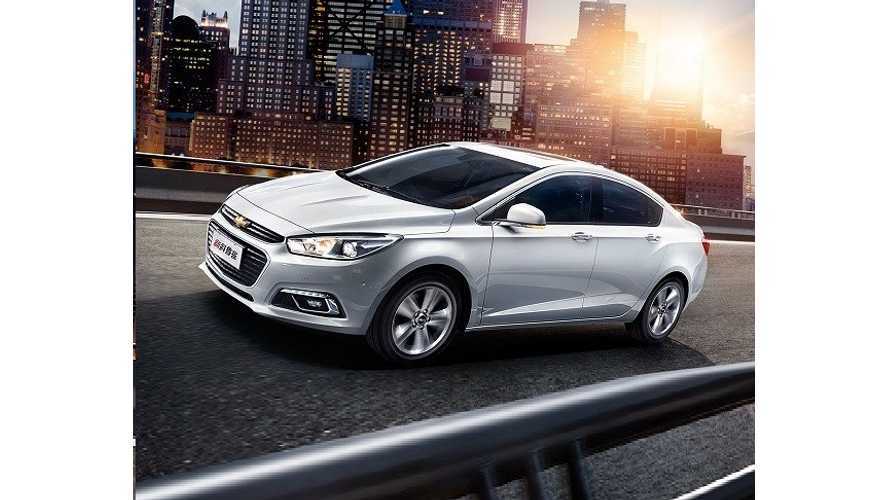 Next Generation Of Chevy Cruze Launched This Week In China

Another Look At The 2nd Gen Cruze For China

Just as the current Chevrolet Volt and Cruze share the same compact car platform - the Delta II, the cars will both move to the same 'all-new' platform next year around the globe.

GM refers to this new architecture as a "global platform for midsize compact cars" - which sounds like a little bit of a oxymoron to us.

Internally, the new base is referred to as the D2XX, and combines the outgoing Delta and Theta platforms.  (Which means vehicles like the Equinox will also be moved onto the same line)

“The new Cruze is the first model based on GM’s new global platform for midsize compact cars,” said Shanghai GM President Wang Yongqing. “With GM's global intelligent technology, it sets new benchmarks for styling, efficiency and user-friendliness in its segment. We expect the new Cruze to appeal to younger car buyers looking for an exhilarating driving experience.”

The next guise of the Cruze does show a lot more GM's European design team's input as it look to compete there against VW's new MQB platform - meaning that front and rear overhangs are much shorter.

Additionally, GM says the Cruze's enhanced aerodynamics give it a drag coefficient of .28;  meaning the Volt will get a lot more slipperier next year as well.   Weight is also reduced by 10% over the outgoing model, while fuel efficiency rises by a reported 24%.

Regardless of the who, what, why of the production fundamentals, there is no getting around the fact that the current Cruze and Volt have a very similar appearance both inside and out --- something which is unlikely to change when the 2nd gen Volt debuts at the NAIAS (Detroit Auto Show) in January.

Dimensionally Almost Identical, This Is How The Current Generation Of Chevrolet Cruze And Volt Compare Visually

So, how do you feel about the new Cruze and how it might relate to the 2nd gen Volt?  Good.  Bad.  Or Indifferent?