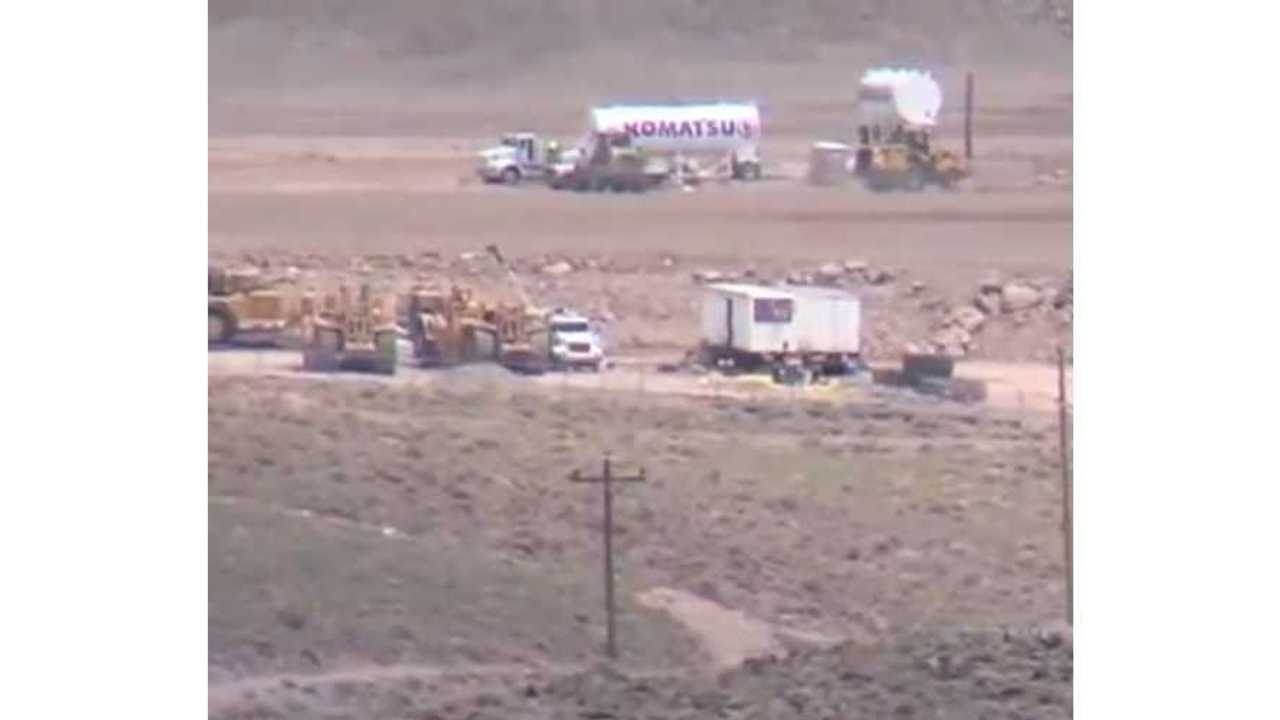 Is This Where The Tesla Giga Factory Will Be Located? (Photo Courtesy of Bob Tregilus)

It is no secret that Tesla Motors wants to act as fast as it can when it comes to preparing suitable sites for its upcoming Gigafactory.

Cindy Pitts, co-owner of F and P construction who has been contracted by Tesla to prepare a Nevada site in the Tahoe Reno Industrial Center, tells RGJ just how hard her company pushed to get that site ready for a visit by Panasonic last month.

"We hired 250 men and women in the next week. We brought in $65 million worth of equipment — 200 pieces of equipment, bulldozers, excavators, haul trucks."

And apparently that still wasn't enough manpower to get the job done.  Faced with continued pressure from Tesla, they did what they had to do.

"We ran 24 hours a day, seven days a week. These men and women broke records," Pitts told the Reno Gazetter-Journal. "We knew we had to get it done by July 21 when Panasonic was going to come in. We built that pad in less than 30 days.

"We told our men and women they were making history.  We paid them bonuses for working extra hours. As they got tired, we upped the wages. We fed them on the site. Nevada men and women met the challenge."

Potential Gigafactory Pad Gets Laid In Nevada (via KTNV Channel 13)

Previously, Pitts had been sworn into secrecy by a non-disclosure agreement, but since Tesla CEO Elon Musk 'officially' let slip the news in a shareholder letter earlier this month, information is now flowing freely about the site construction.

F and P says that the site is as impressive a job as they have seen to date, and that they are thrilled for Nevada to be in contention now for the battery facility.

Today at the site, one would find that the pad is completed and now ready to move ahead on the project, but that the work itself has mostly been idled as Musk and company prepare other sites in the US (specifically  California, Texas, Arizona and New Mexico), while weighing the pros and cons of each location before making an ultimate decision.

"Building that pad in three and a half weeks was biblical. Work has not stopped. There's still ongoing things, building catch basins, rerouting flood control, bank stabilization. But the pad is finished. It's ready."

Mr. Gilman did add a previous unknown factoid demonstrating how eager Tesla continues to be actually physically build the plant; specifically  that the steel for the Gigafactory has now all been ordered - as that component takes a fair amount of lead time.  The developer also noted that it was not earmarked for any particular location at this time.

Earlier this month Elon Musk made the following comment about the Reno site:

“We have  essentially completed the pad, the construction pad for the Gigafactory in Nevada. So in terms of creating a flat pad and getting the rocky foundation that is substantially complete. There’s still a little bit of work ongoing.  We are going to be doing something similar in one or two other states - which is something I previously said we’d do because I think it makes sense to have multiple things going in parallel.”

“Before we actually go to the next stage of pouring a lot of concrete though we want to make sure we have things sorted out at the state level - that the incentives are there that makes sense,…But I do want to emphasize that Tesla is not going to go for a deal that is unfair to the state or unfair to Tesla. We want to make sure it’s compelling for all parties.   I think on the Nevada side, at this point the ball is on the court of the governor and the state legislature.”