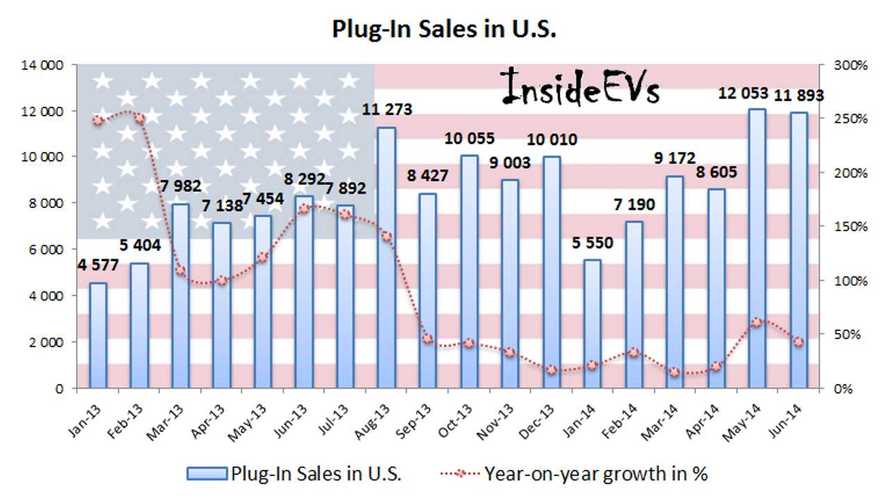 Taking a closer look at the consumer's choice, we see that the whole plug-in market is split on two parts - all-electric (in our case we include here BMW i3 as most were BEVs and we have yet to receive the sales splits from BMW).

Anyways, those i3 don't make a big change (Graphically, that is) because just seven hundred were delivered by end of June.

Breaking up the graph, we see that the all-electric part is dominated by two models - the Nissan LEAF, which takes 50%, and Tesla Model S, which has 29% share.

All the other models combined (smart fortwo electric drive, Fiat 500e, Ford Focus Electric, BMW i3, Chevrolet Spark EV, Toyota RAV4 EV, Honda Fit EV, Mitsubishi i-MiEV) have just 21%. Only electric smart and Fiat were able to exceed 1,000 units, however we expect the BMW i3 soon will take the lead as "Best of the rest."

In the case of PHEVs, the competition is more balanced. Three brands - Toyota, Chevrolet and Ford have similar share of a third of the market, however Ford has two models.

The Toyota Plug-In Prius recently outstripped the Chevy Volt, which probably doesn't make GM happy.  We must remember that Toyota was able to do that despite the Prius PHV qualifying for a $2,500 Federal tax credit, instead of $7,500 for the Volt due to battery size differences.

Three other models (Porsche Panamera S E-Hybrid, Cadillac ELR, Honda Accord Plug-In) don't count too much as all are really low volume, below 500 units in six months.