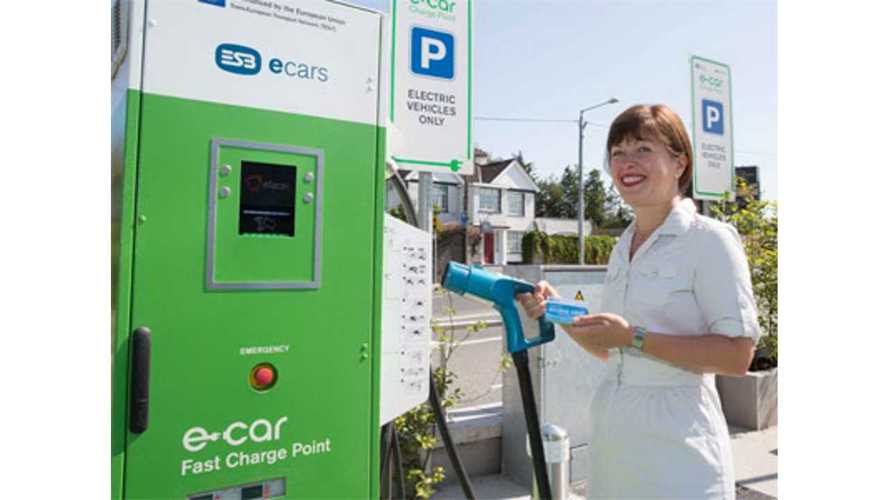 The recently completed pilot electric vehicle project for the European Commission helped to finance 46 fast charge points and now all major towns in Ireland are "connected".

"ESB announced that it has successfully completed the installation of electric vehicle fast chargers across the country plus 10 AC chargers located at Iarnród Éireann sites as part of a pilot project co-funded by European Commission via the Trans-European Transport Network (TEN-T). In addition, five fast chargers have been also installed under this programme in Northern Ireland by the Department for Regional Development, Northern Ireland.This first of its kind project, will provide advice and learning experiences for similar projects in other European countries. These installations bring the total number of public electric car charging points across the island of Ireland to approximately 1,200, connecting all major towns and cities."

"The data and behavioural studies monitored during the project have provided an invaluable insight into driver needs and habits, which will be imperative to the final report to European Commission."

"It is a great achievement to reach the completion of this project. A huge amount of work has been put into providing fast charge points throughout Ireland and it is expected that the nationwide network of charge points will encourage people to go electric in the near future."

"An electric car costs just 2 cents a kilometre to fuel and the average motorist could achieve running cost savings of almost €2,300 a year. Electric cars offer the prospect of very real savings to Irish motorists."

Charging points in Ireland can be seen on this map.