Tesla Supercharger - From Start Of Construction To Activation In St. George Utah 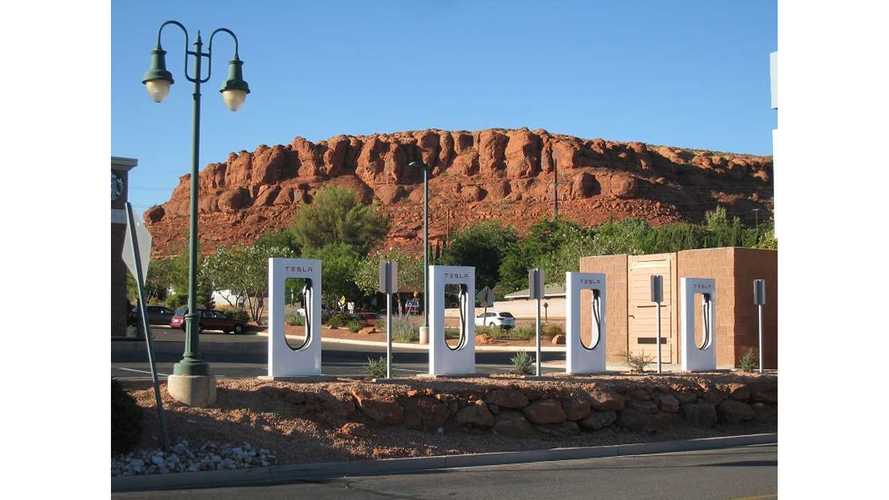 Tesla Model S owners will be delighted to know that a few weeks ago the Tesla service technician from Las Vegas activated the SuperChargers in my area of St. George. There are four stations, located behind the Starbucks in the Sunset Center shopping plaza at 1091 North Bluff Street. With this location now functioning, owners can easily visit the numerous National Parks and Monuments here in Southern Utah. I confess that I am green with envy! Knowing how enjoyable daily driving is in my Leaf, I would love to also be able to take such road trips in a quiet, comfortable, responsive, clean electric vehicle. These desert wonders do not deserve to continue to choke on tailpipe exhaust!

When and if Model S owners use these SuperChargers, whether traveling north or south on I-15, I would strongly suggest always taking the second route to-and-from the freeway described on the webpage linked above. Although a mile longer, it is much faster, more picturesque, and not nearly as congested as navigating the downtown streets in St. George:

For those interested, I constantly stopped by the construction site to monitor the installation of these SuperChargers, and will post below a few photos of the process:

I had a chance to chat with the service technician while he inspected the site and labeled the SuperChargers. He even graciously gave me a tour and explanation of the inner workings of the two charger cabinets. Of course, he preferred that I not take photos of that hardware inside, but it is truly impressive. Each cabinet houses a stack of 12 chargers —a total of two dozen!— identical to those in the Model S. Cooling hoses feed in and out of the chargers, top to bottom, leading to a pump underneath that recirculates the coolant. There are also large fans up above for air cooling, as you can see in the August 2 photo above.

The technician also explained that each cabinet services two of the units. The first one powers SuperChargers 1A and 1B; the second, 2A and 2B. The protocols for charging gives precedent to the first Model S to plug in to either or those pairs, let's say 1A, allowing it to charge at maximum speed. If a second Model S then plugs into 1B, it starts charging at a reduced rate. However, as the 1A battery becomes full, and the charge throttles back, that power is redirected to the 1B pack. When 1A disconnects, 1B is then charging at maximum speed. I mention this to help owners use the SuperChargers more effectively. For example, if you pull into this site, and there is already one Model S charging, let's say from unit 2B, then you would do better to plug into either 1A or 1B (powered by a different cabinet), rather than 2A (powered by the same cabinet, at a lower charge rate).

According to the contractor, there are still some minor finishing touches to be completed. For example, a couple of boards for the doors need to be mounted after trimming them for a custom fit around the hinges. And the technician now wants him to install a guard rail behind the SuperChargers to thwart any foolish owners who might try to descend the steep dropoff to visit other shops in the plaza —instead of using the designated crosswalk a few steps farther to the west. You can see that dropoff in the photo at the top of the page: to be sure, it does look like an accident waiting in ambush.

I suspect that, when I drive by these SuperChargers in the future, I will see an increasing number of Model S EVs lined up at the juice bar, now that the corridors throughout southern Utah are replete with such stations: Blanding, Moab, Green River, Nephi, Richfield, Beaver, and now St. George. And to think that there isn’t a CHAdeMO QuickCharger for my Leaf within 150 miles of here! Tsk. Did I mention that I’m jealous...?!

And speaking of emotions, although I am thrilled for Model S owners, the activation of the St. George SuperChargers also makes me sad. In the past, such owners would sometimes contact me via PlugShare and ask to use my EVSE and/or Milbank RV Panel while driving between Las Vegas and Beaver. I have always enjoyed meeting those other EV enthusiasts, and will miss such opportunities.