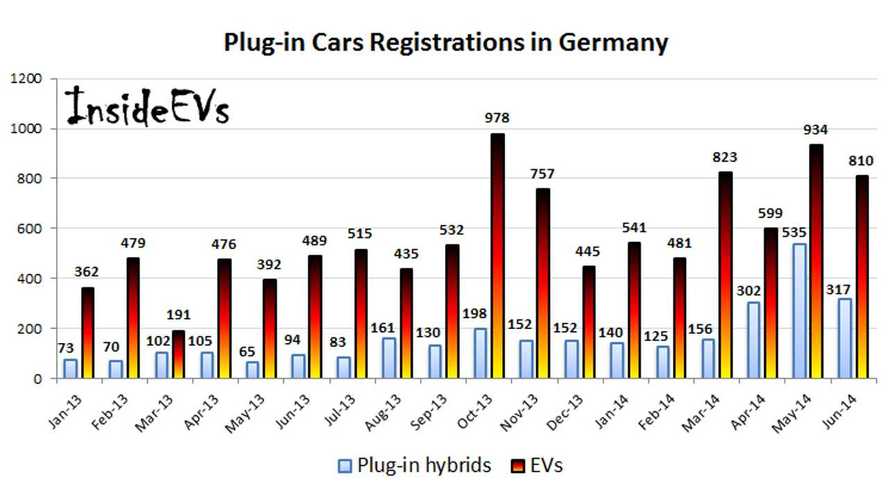 Sales of plug-in cars fell a little bit in Germany last month, but still June was one of the best months to date. 810 fully electric cars and 317 plug-in hybrids were registered. 0.3% market share is now the ceiling for EVs in Germany, as only once registrations hit 0.4%.

We could assume that BMW i3 is leading the market in June with 211 registrations (including 94 non-REx) and Volkswagen e-up! is second.  BMW also sold 23 i8s during June, for a YTD total of 55.

However, without the revealed split between e-up! and e-Golf (all we know as of now is that there were 231 VW all-electric registrations), we can't be sure of where e-up! places. Most are e-up!s but probably not enough to overtake i3.

Nissan LEAF remains relatively strong with 80 registrations (above average this year), and Mitsubishi Outlander PHEV after a peak of 293 in May now fell to just 77 (perhaps waiting for another shipment as fulfillment has been sketchy due to demand).  Volvo sold 44 V60 Plug-ins.

Tesla... where is Tesla... Tesla Model S with 446 registrations is just behind Renault ZOE (513) and Mitsubishi Outlander PHEV (490) in YTD standings, but ahead of 380 Nissan LEAFs.