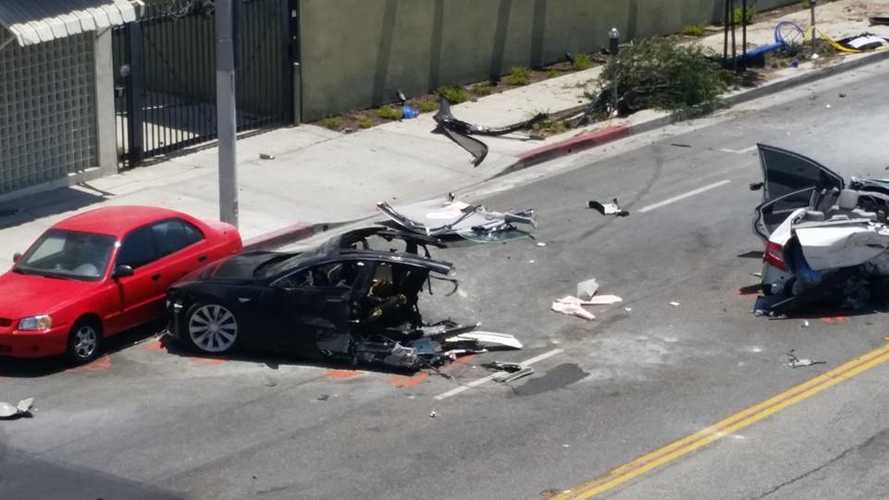 In our all-out effort to cover the tragic crash in which a stolen Tesla Model S ended up split in half, we scoured the Interwebs for every additional image/video we could find.  Here we present to you what we discovered.

The above video was posted with this description of the chain of events:

A pursuit suspect is in critical condition after being ejected from a stolen Tesla in West Hollywood on Friday, police said.

One other person is in critical condition. Several other people are injured. La Brea Avenue is shut down at Lexington Avenue.

The chase began around 2:00 a.m. According to LAPD, the Tesla was stolen from a dealership lot. Officers pursued the vehicle until a cruiser was involved in a minor crash. The officer had minor injuries.

The Tesla continued for 7 miles into West Hollywood. Police said the driver was travelling in excess of 100 mph down La Brea when it hit other vehicles, including a Honda with several people inside. The Tesla became airborne, took out several light poles and split in two.

Part of the Tesla remains wedged between two buildings. The other half landed in the street. Witnesses said the Tesla's batteries burst into flames and began sparking like fireworks.

"I've never seen a half of a car wedged between a building before and it's sad, innocent victims were involved in this," said Lt. Mike White with the Los Angeles County Sheriff's Department.

The sheriff's department is handling the investigation.

Video above has this description:

My boyfriend came upon this crash scene last night/early this morning in West Hollywood after what was apparently a high-speed chase involving a stolen Tesla, which crashed into another vehicle then into a building and caught fire.

The driver (suspect) was ejected from the Tesla right before it caught fire. No fatalities, amazingly!

One of the cars had fireworks in it and they were going off all over the place, you can see some in the video.

A short clip recorded right before the longer 20-minute clip I posted of the crash scene in West Hollywood involving a stolen Tesla after a high-speed pursuit in the wee hours of July 4, 2014.

Our original breaking report on the Tesla Model S crash is linked below:

Stolen Tesla Model S Crashes, Gets Cut In Half, Goes Up In Flames – Video – Updates

We'll continue to follow this story in hope that we are eventually able to provide you with all of the details.