Stolen Tesla Model S Crashes, Gets Cut In Half, Goes Up In Flames - Video - Updates 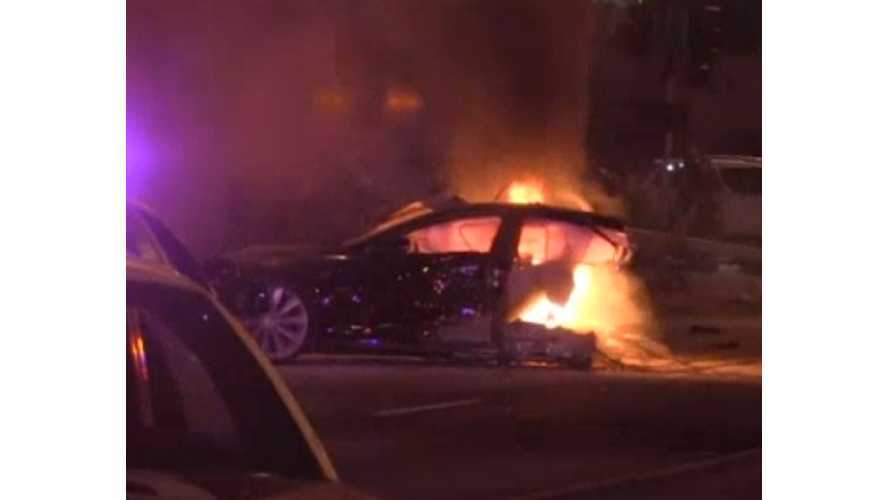 Cut In Half Tesla Model S (via NBC News)

A high-speed pursuit ended when a stolen Tesla Model S crashed and was split in two in West Hollywood at approximately 12:30 AM today.

"The crash occurred around 12:30 a.m. on La Brea Avenue between Fountain and Lexington avenues."

"A witness told KTLA that the Tesla hit a pole, got cut in half and that part of it landed on top of a white car."

The witness went on record, stating:

"Video from the scene showed the Tesla was split in half, and a portion of the vehicle appeared to have crashed into a building at the corner of the street. The other half of the vehicle remained in the roadway."

“There was fires after that that broke out.  I saw the firefighters — like 25 firefighters – standing around the white car with the Jaws of Life.”

"Multiple vehicles were involved in a fiery wreck as a result of the chase and up to seven people may have been injured. At least four vehicles suffered major damage."

As seen in the video, multiple automobiles were involved in the carnage.

The crash is currently under investigation.

*UPDATE: Driver of Model S reported to be deceased at the scene after being launched through Model S windscreen.

UPDATE 2: InsideEVs has received word that one of the persons in the Honda Civic that was struck was critically injured, and that at least one person inside the stolen Tesla Model S who was reported to have died at the scene, has been revived by paramedics before taking him to hospital with critical injuries. His current status is unknown.

Update 3: Pursuit suspect (only 1 occupant confirmed in Model S) is in critical condition, but has pulled through.

Update 4 (July 10): Driver of Tesla Model S has succumbed to his injuries and died at hospital

This accident comes just a month after Elon Musk stated there had been no serious injuries or fatalities in a Model S after 344 million miles of driving, a fact he stated was "...certainly one of our proudest accomplishments".