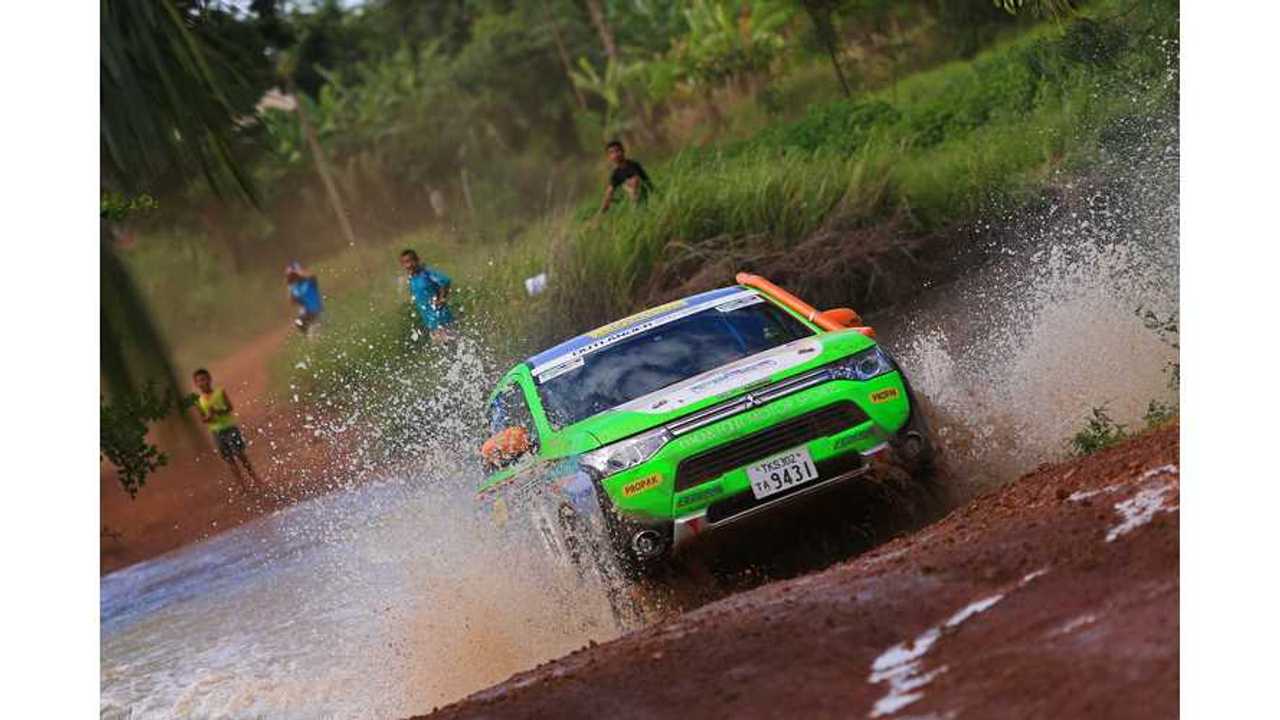 For the second year in a row, a Mitsubishi Outlander PHEV competed in and completed the Asia Cross Country Rally:

The team completed the rally in 19 hours 17 minutes and 12 seconds for the total driving distance of 1986km under rough courses, winning the first place in the class and 14th place overall. The Outlander PHEV, having completed this rally for two years in row proved its outstanding levels of reliability, durability and all-terrain performance as well as proved the Plug-in Hybrid Electric Vehicle (PHEV) powertrain is durable even under severe road conditions.

This rally-ready version of the Outlander PHEV is heavily modified from the version available to the consumer:

The Mitsubishi Outlander PHEV rally car used the competition-modified suspension from last year's race car as well as raised ground clearance with the drive battery placed higher for improved off-road performance. The car's Super All-Wheel Control (S-AWC) integrated vehicle dynamics control system was tuned for competition use to provide better traction. Other modifications included the fitting of a roll cage and underbody skid plate, the use of lighter engine hood, rear gate and interior parts, and additional sealing and a snorkel for water crossings. Apart from these changes, the car competed using the almost the same Plug-in Hybrid Electric Vehicle (PHEV) powertrain and mechanical parts as the standard production model.

Here's how the Outlander PHEV fared in each leg of the race:

The Outlander PHEV won its class for the second year in a row. Overall standing by leg:

Leg Three (August 12): Race moves from Thailand to Cambodia, towards the Angkor Wat World Heritage site. This leg featured comparatively flatter terrain where the Outlander PHEV could take advantage of the high torque of its electric motors and S-AWC which led to a step up to 11th place overall.

Leg Four (August 13): Progress to 9th place overall in this leg which started from Angkor Wat.

Leg Five (August 14): This gruelling leg was the longest and featured deep ruts. Lack of high ground clearance forced the Outlander PHEV to avoid much of the second half of the course, falling to 15th place overall.

“Because the extreme road surface conditions unique to the Asia Cross Country Rally gave us a really hard time when we competed for the first time last year, this year we raised the ground clearance further to improve the car's off-road performance."

"It makes me very happy that the Mitsubishi Outlander PHEV has not only successfully completed the rally under such gruelling conditions for the second year in a row but also placed higher than last year."

"I am also very satisfied and proud that the Outlander PHEV was able to demonstrate so convincingly the reliability and durability of MMC's own plug-in hybrid electric vehicle system as well as the superior capabilities of its Twin Motor 4WD and S-AWC systems."

"The Outlander PHEV's improved all-terrain performance this year means we have been able to collect more valuable data than last. I am looking forward to utilising this in our electric vehicle development.”