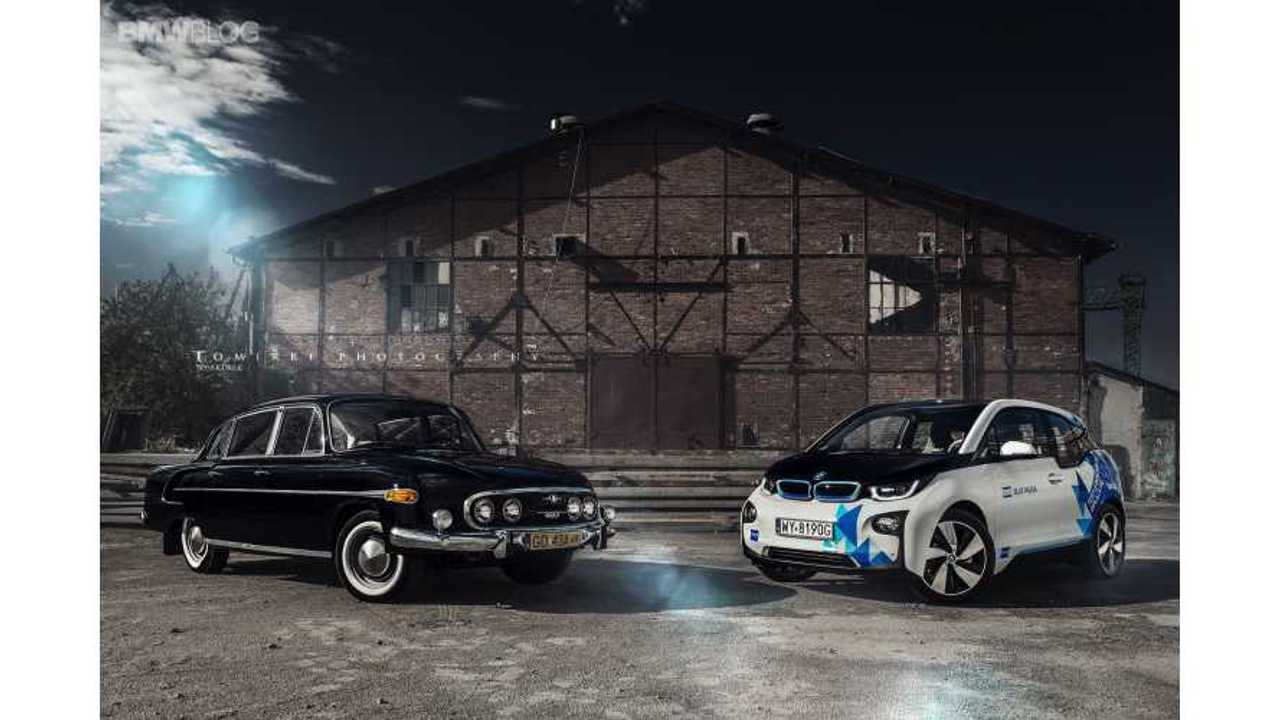 With increased development of electric and hybrid cars going on these days, our goal is to deliver more information on green technologies and educate buyers on the options available to them.

Today, we have a chance to showcase a somewhat unusual photo shoot depicting two cars that are generations apart, but similar in its shape and form.

First one is a Soviet era luxury vehicle (if there ever was such a thing) powered by a Tatra 603G V8 air-cooled engine with a displacement of 2474 cc, which develops 77.5kW that power the rear wheels.

*Editor's Note: This post, written by Vanja Kljaic, appears on BMWBLOG. Check it out here.

If you think that rudimentary suspension, lack of any modern technology involved, or simply put, lacking anything and everything, is and will be the main thing about this vehicle, you are terribly wrong. The V8 overhead valve engine weighed only 160 kg (350 lb), allowing the car to have 47/53 front/rear interaxle weight distribution when fully loaded. The engine was already used in the late Tatra 87 and its extreme reliability was confirmed by previous use in Tatra race cars or military light truck T805. The air-cooling system was designed to cool the most heated parts of the engine more effectively.

Further modifications led to introduction of the T603H engine, from which the T603HB (export model) and T603HT (tropical climate model) were derived. There are also rumors about Fidel Castro driving a version with air conditioning included. Talk about luxury behind the wall.The vehicle in question featured a suspension that had swing axles in the rear and MacPherson suspension in the front. Coil springs were used with hydraulic telescopic shock absorbers allowing for a much smoother ride for all those high ranking communist officials back then.

Initially a double-circuit hydraulic brake system was used, but later a single-circuit was put in place. All wheels had drum brakes until 1968, when they were replaced by disc brakes. This vehicle had a lot of success in racing, as it competed in events like the Rally Monte Carlo, various rallies and events across Europe and with that a wide range of racing events in Czechoslovakia too.

Now you may ask yourselves what does this car actually have in common with the modern and techie filled BMW i3? I believe these two cars are showing us how the technology and the world have developed. Furthermore, it emphasizes the development of car culture, civilization in general all, combined with technology breakthroughs that was impacted by sociological and economical changes throughout that time. From a car that was specific in a way where only a select few were able to drive it, to a car which anyone can purchase, own and use. Whatever you may say, progress is sometimes best described by showcasing two similar things from completely different times. In my opinion, both are serving a purpose in showing us what time affords us in both design, manufacturing and development of the car industry overall.

Well, that and stunning work by Tomirri Photography showcasing these worlds apart vehicles in the same location, perfectly portraying several different eras, schools of thought and design headings all together. From internal combustion, air conditioning as a luxurious option just for world class dictators, all the way to a car that gets charged by plugging a cable in a household source of electricity, this is a true showcase of where the future will go.