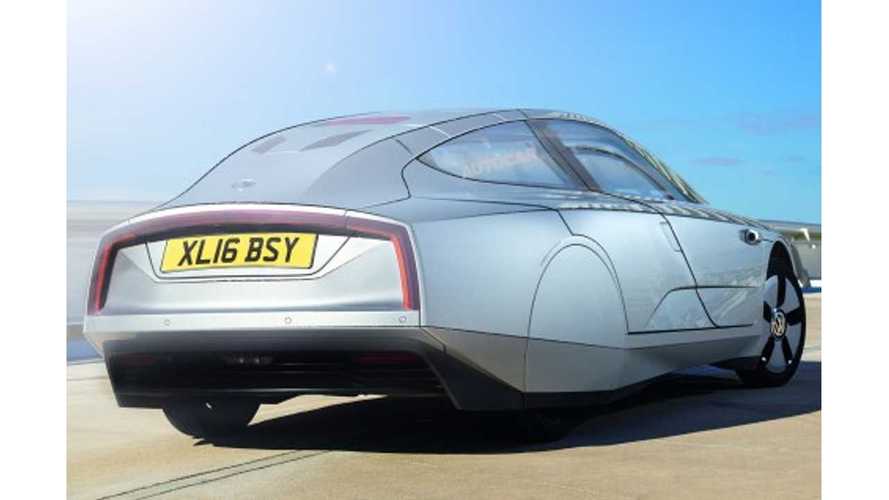 According to Autocar, Volkswagen is already considering adding two doors and lengthening the XL1 plug-in hybrid to transform it into the four-door XL2.  Creative name?  We think not.

"Volkswagen has a four-seat version of its XL1 hybrid on the drawing board."

"The current, two-door, two-seat model is in limited production, but Autocar understands that VW bosses are now considering building a second version that will accommodate four adults."

"According to sources, much of the XL1 technology will be carried over into a new car – particularly the front and rear subframes and suspension and braking systems – although the central body structure would have to be totally rethought."

Autocar suggests that VW would have to dump the XL1's carbon fiber tub completely and start from scratch on one that will accommodate four people.  However, and rather oddly we must add, VW is expected to keep the XL1's slightly askew seating (both front and back now) to keep the XL2 as narrow as possible.

The rear doors are expected to operate similar to the BMW i3 (meaning rear-hinged).

There's no way the XL1's powertrain will carry over intact, as it's barely sufficient at propelling the lighter XL1 with only two occupant on board.  VW will certainly have to up the power output from the XL1's 800cc twin-cylinder diesel engine (rated at 47 hp) and the electric motor (27 hp) or fit the XL2 with an entirely new powertrain to make it even passable in terms of acceleration.

"Today’s car weighs just 795kg. A further pair of bucket seats will add 80kg and the extended centre cell and extra doors another 50kg or so. The XL1’s electrical system (105kg) is likely to remain unchanged for the four-seater and the weight of the drivetrain (227kg) could rise because of a marginally bigger battery."

"The whole car is likely to come in at about 940kg, making it only slightly lighter than a VW Up city car."

Most importantly, the XL1's amazing aerodynamics are expected to remain stellar in the XL2.  In fact, Autocar suggests that "increasing the length should marginally improve aerodynamic performance and further optimisation of the drivetrain should allow the car’s rating to remain at 310 mpg."