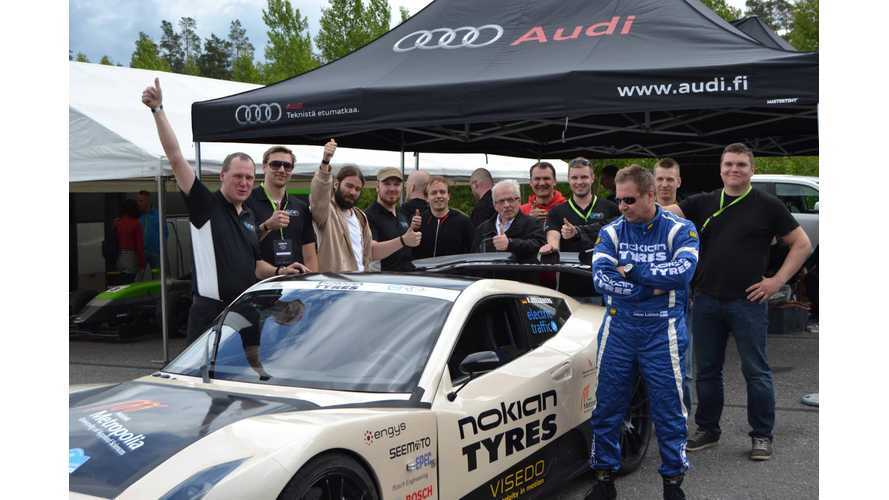 The Finnish Electric Raceabout, developed at Helsinki Metropolia University of Applied Science,s recently set another record - four years after it was first shown to the public.

"Janne and E-RA achieved 277,40 km/h when racing down the 2500m long runway with moderate headwind. After just turning the four motor equiped E-RA around at the end of the runway Janne rushed back setting even more impressive top speed of 285,31 km/h! This results an average top speed of 281,36 km/h (174,86 mph) for two directions."

Not bad, and the acceleration results were interesting too:

"The acceleration numbers from the record runs clearly demonstrate the strength of the E-RA direct drive concept. Picking up the first 100 km/h is not very fast for a sports car but adding the next 200 km/h takes only a little longer! The results are:

Drivetrain for this project was developed and manufactured in Finland.

"The traction motors for the car were designed at Lappeenranta University of Technology in 2009 and built at local motor manufacturer AXCO Motors. Also the four inverters controlling these impressive 150 kW peak power motors come from another Lappeenranta based company called VISEDO. The fact that such a great amount of key technology comes from this city right next to the Eastern border of Finland cannot be just a coincidence, but merely reflects the true level of high-tech research and industry finding home here."

Here is short video from the record run: