Golfer Wins BMW i8 With Hole In One 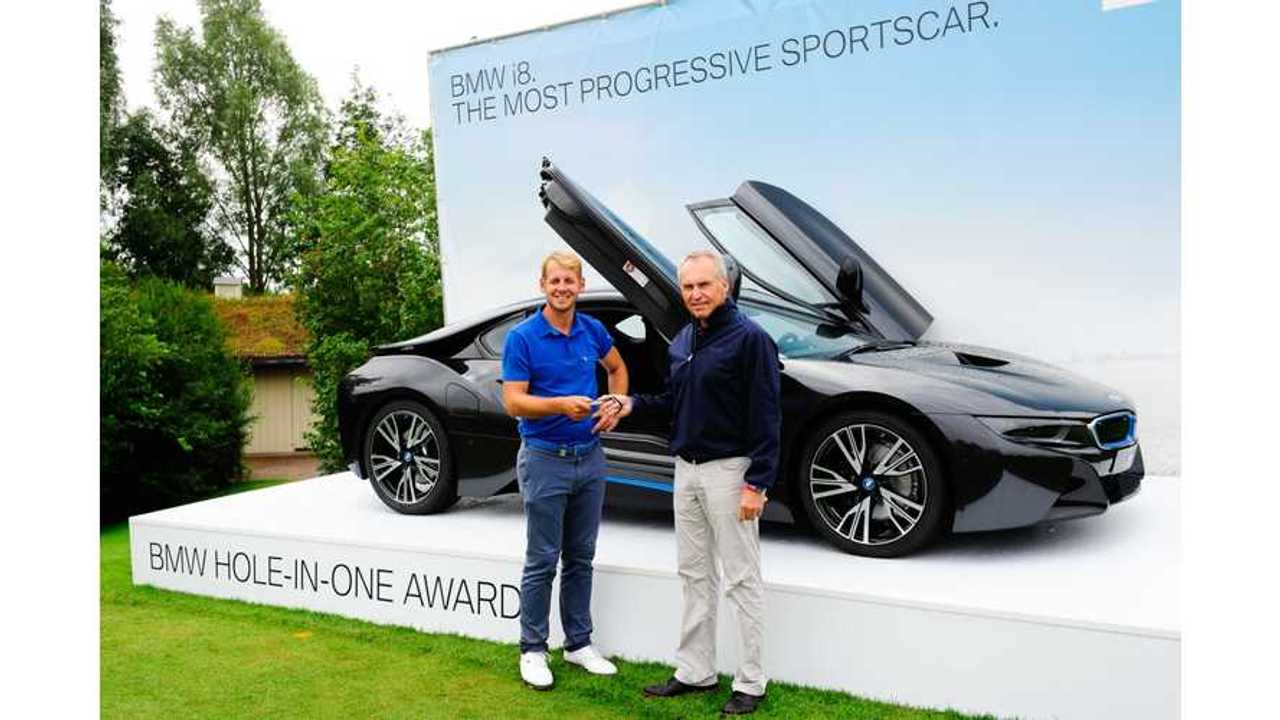 "If ever anyone hit a truly electrifying shot, then it was James Heath on Sunday morning. The Englishman aced the 16th hole (par 3, 156 metres) on the final round of the BMW International Open. His reward for the perfect seven-iron shot is one of the most exciting Hole-in-One Awards in the history of the tournament: the BMW i8 plug-in hybrid sports car."

“I am blown away. I’m virtually speechless.The BMW i8 is a stunning car and worth 137.000 Euros. It more than triples the highest cheque I’ve ever made. I aimed about four yards left of the flag because of the water on the right. It pitched just past the flag and spun back in.  This is my fifteenth hole in one – the second in professional tournament play – but the others pale into insignificance by comparison.”

I've shot a hole-in-one but once in my non-golf career...I think I deserve a BMW i8, too.

Some background on Heath and info on the BMW i8, as provided by BMW below:

Today’s ace was the most valuable shot in the career of the former English amateur champion, who turned pro in 2004 but has since struggled to establish himself on the European Tour. Heath was discovered by Nick Faldo when he won the “Faldo Junior Series” in 2002. The six-time Major winner continues to influence his career with help and advice. Heath came through Qualifying School to secure his ticket for the current European Tour season, and had earned 30,450 Euros this season ahead of the week at Gut Lärchenhof.

The BMW i8 heralds a new era and is set to revolutionise its class. It is the first sports car with the consumption and emission values of a compact car. The combination of electric engine and a powerful petrol engine forms the basis for maximum performance with minimal consumption. With its plug-in hybrid system, captivating design, gullwing doors and innovations like the intelligent lightweight construction and laser light technology, the BMW i8 is one of the most spectacular and pioneering cars BMW has ever built.

The most recent ace at the 26th BMW International Open is the fifth time the keys to the Hole-in-One car have been handed over to a new owner. Two years ago, when the only European Tour event in Germany made its debut at Gut Lärchenhof, it was another Englishman who left with a new set of wheels: Andrew Marshall won a BMW 640i Gran Coupé in 2012. French players have produced a stroke of genius on two occasions since the tournament was held for the first time 26 years ago. In 2010 Jean-François Lucquin was rewarded with a BMW 535i Limousine, following in the footsteps of his compatriot Raphaël Jacquelin, who received the key for a BMW Z8. The first Hole-in-One Award, a BMW 325i Cabrio, was won by American Jay Townsend at only the third BMW International Open back in 1991.